Chemistry - Ring expansion from a given cyclic carbocation

I think your friend is thinking of the cyclobutyl carbocation which does ring contract to the cycylopropyl carbinyl carbocation (and also equilibrates with the methallyl carbocation).

However, just as you thought, the cyclobutyl carbinyl carbocation does ring open to the cyclopentyl carbocation (ref_1, ref_2, ref_3). This rearrangement is driven by carbocation stability (primary to secondary) and relief of the steric strain present in the 4-membered ring, again, just as you suggested. 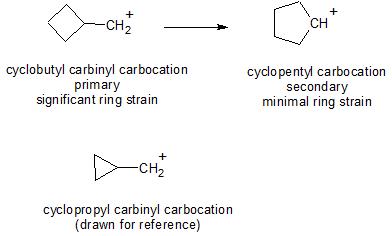 Note: this question has been asked previously on SE Chem, however I believe the accepted answer is incorrect, as it seems to primarily address the cyclopropyl carbinyl case, and what is said about the cyclobutyl carbinyl carbocation (little to no ring expansion) is incorrect.

In concluding Remarks of their work on the structural study of the 2-norbornyl cation, Olah and coworkers (Ref.1) stated that:

More importantly, rather than being rare, two-electron, three (or multi)-center bonding is characteristic of electron-deficient molecules, including nonclassical carbocations.

Later, they found computational evidence for the existence of nonclassical cyclobutylmethyl cation (Ref.2). According to the part of abstract in the Ref.2:

Ab initio calculations at the MP2/cc-pVTZ level show that the cyclobutylmethyl cation is a nonclassical σ-delocalized species, which is distinct from the global minimum $C_2$-symmetric cyclopentyl cation...

However, in reality, they failed to achieve persistent ((long-lived) classical or nonclassical cyclobutylmethyl carbocation, even at lower than $\pu{-80 ^\circ C}$ (Ref.3). Nonetheless, just as you thought, the cyclobutyl carbinyl carbocation readily undergoes ring expansion-rearrangement to give the corresponding cyclopentyl cations (See B (i) in the scheme; NMR evidence are provided in the reference). During the extended study, the authors studied (2-methylcyclobutyl)methanol derivative in superacidic medium and, suggested a mechanism depicted in the following scheme (part A), which clearly shows the reaction goes through nonclassical carbocation: 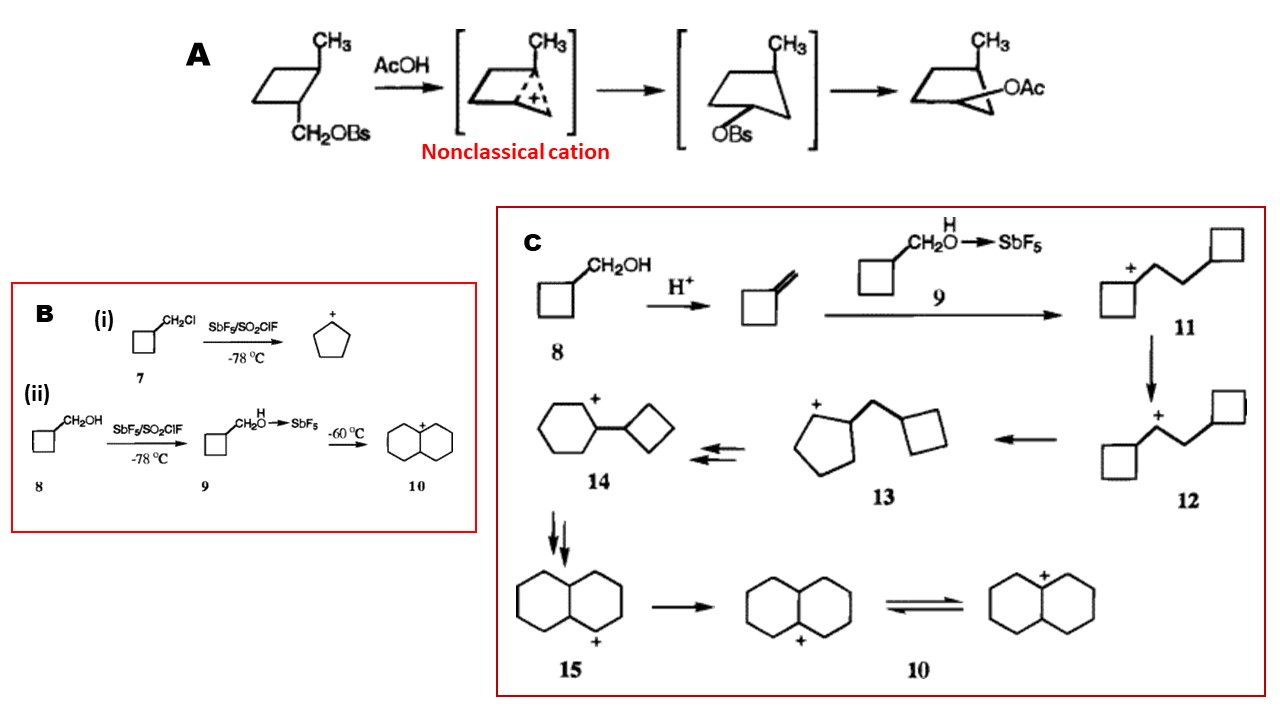 Moreover, cyclobutylmethanol took a different path under superacidic conditions, undergoing dimerization followed by rearrangement when warm a little bit. Mechanism C has been suggested to explan the outcome. All these evidence suggest that the chemical behavior of cycloalkanes depends on the ring size and the nature of the reagents used.