As @Waylander pointed out, it appears this reaction has not been performed and/or recorded in any literature, so it is quite dangerous to speculate.

But keeping that aside, A 3D perspective reveals that abstraction of protons from the methyl group in quite unhindered. 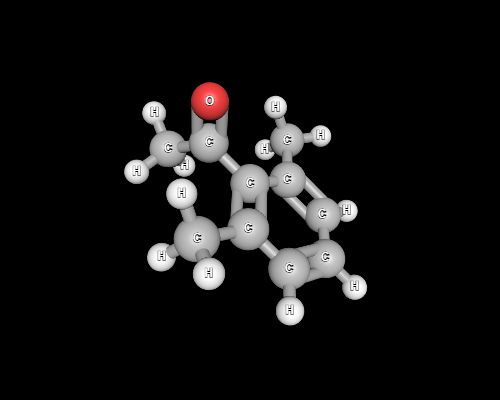 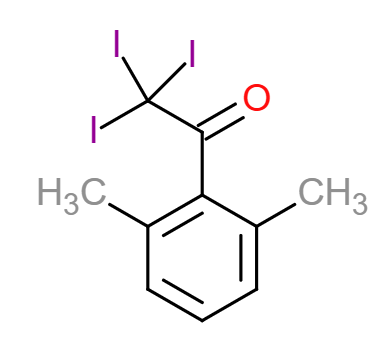 However, a quick glance at spatial orientation of iodine atoms reveals the reaction may be dead slow in the next step. 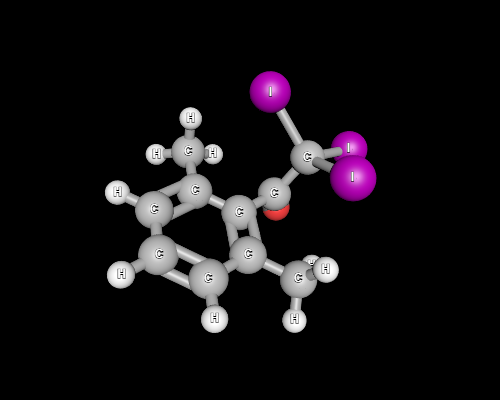 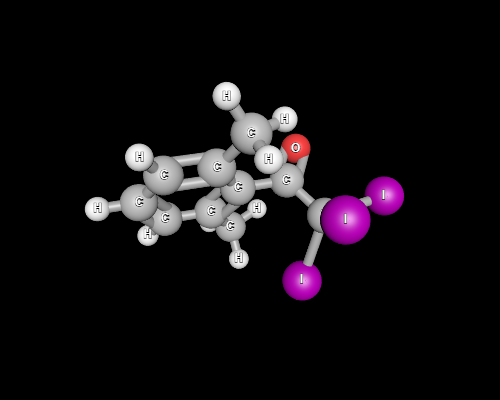 Notice that the Burgi-Dunitz trajectory, which we may assume the incoming nucleophile to take, is hindered by the large iodine atoms and the methyl group.

It is quite safe to assume that the attack at the carbonyl carbon is unfavoured, preventing the release of the $\ce{CI3-}$, and ultimately $\ce{CHI3}$ never appears.

EDIT: Apparently there is some relevant literature available for similar compounds, as mentioned in this answer. Thanks to Mathew for searching and pointing it out.

There have been a few answers for this question, which make sense on steric hindrance preventing the idoform formation. However, one thing I wouldn’t agree with is almost everybody’s claim of not having literature evidence to support their theory, thus some may categorize this question as just opinion based and chose to close it (regardless how good it is). To avoid that, I’m going to try to give some acceptable literature evidence to support steric hindrance argument.

Because of original idoform test (introduced by Lieben in 1870) is not reliable for water insoluble compounds, Fuson and Tullock provided improved idoform test in 1934 (Ref.1), which use dioxane as a secondary solvent. They have checked new method with wide variety of compounds that have been analyzed previously with Lieben’s method, but had given mixed results, some of which were misleading. For example, in a majority of these cases, the behavior toward hypoiodite has not been previously reported. Such example is pinacolone, which was previously considered as negative to the test, but given positive result with a longer period of heating (one of the evidence for role of steric hindrance). According to authors, some of the most notable negative results were given by following compounds (Figure 1; Ref. 1 & 2):

Yet, Figure 2 listed the compounds, which have given positive results, but have significant steric hindrance (Ref. 1 & 2):

Most notably, you may compare compounds 5 (negative; Figure 1) vs compound 11 (positive; Figure 2). They both have similar steric hindrance (aromatic $\ce{C8-H}$ vs $\ce{C3-H}$ is the only difference), yet gives contrary results. Only explanation could be acetic acid group on $\ce{C1-O}$ must be cleaved before iodoform formation on compound 11, but similar cleavage on $\ce{C2-O}$ of compound 5 is restricted due to its position, since it was known that 1-naphthyloxy group (conjugate base of 1-naphthol) is more stable than 2-naphthyloxy group (conjugate base of 2-naphthol). Same can be told about compound 12 giving positive test. Nonetheless, these results clearly shows that only restriction to give idiform is di-ortho-substitution on the substrate (cf., 1-4; Figure 1), which gives the additional resistance to the formation of final tetrahedral intermediate as pointed by Jan. Meanwhile, mono o-, p-, or m-substitution OR di-o,p-, o,m-, or m,m-substitution does not effect the idoform formation. This fact is stated in Ref.1 as:

The iodoform reaction is greatly retarded by steric hindrance. The test is negative for all compounds which contain one of the requisite groupings joined to an aryl radical carrying two ortho substituents. As a matter of fact, the reaction is slow, even with pinacolone.

Even tri-substituted compounds such as compound 8 give positive idoform test as long as two of substitutions were not in di-ortho positions. In their conclusion, Fuson and Tullock provided a generalization to the reaction (Ref.1):

The test is positive for compounds which contain the grouping $\ce{CH3CO}$-, $\ce{CH2ICO}$-, or $\ce{CHI2CO}-$ when, joined to a hydrogen atom or to a carboy atom which does not carry highly activated hydrogen atoms or groups which provide an excessive amount of steric hindrance. The test will, of course, be positive also for any compound which reacts with the reagent to give a derivative containing one of the requisite groupings. Conversely, compounds which contain one of the requisite groupings will give a negative test in case this grouping is destroyed by the hydrolytic action of the reagent before iodination is complete.

The reference 3 would give some insight to the formation of sterically hindered idocompounds at $\alpha\ce{C}$ without giving idoform (formation of the triiodide intermediate as stated in OP's comment). Also read Ref.4 for review on idoform test.

During my mechanisms and named reactions lecture at bachelor’s level, a number of different mechanisms were introduced for transesterification of carboxylic acids and we were required to select the correct mechanism for a given set of reaction partners.

One of the typical special cases was a 2,6-disubstituted benzoic ester—basically your starting material but with an ester group rather than an acetyl group. It was noted that nucleophilic attack on the carbonyl carbon was not possible as the methyl groups sterically blocked the Bürgi-Dunitz trajectory. Instead, these esterifications would proceed via an acylium cation formed by displacement of the $\ce{OR-}$ residue; once the linear acylium cation ($\ce{Ph-C#\overset{+}{O}}$) was formed, this could be attacked from any angle without the ortho substituents interfering.

It is likely, as William outlined, that the same problem exists for 2,6-dimethylacetophenone. While there should be no problem replacing the methyl hydrogens with iodides, there is no angle of attack for the hydroxide ion to generate the tetrahedral intermediate.

In the case of transesterification, the $\ce{OR-}$ group is a sufficiently good leaving group so that the acylium cation may form. $\ce{CI3-}$ is a much stronger base, so it seems highly unlikely to generate a corresponding acylium in this reaction. In the usual haloform reaction, the regeneration of the $\ce{C=O}$ double bond provides a driving force to promote the liberation of $\ce{CI3-}$ but that pathway is not possible if an acylium must be generated.

I'd agree with Waylander's 2nd comment - hydrolysis to form the carboxylic acid requires formation of the tetrahedral intermediate (from OH- attack on the keton), which the presence of two ortho substituents on the benzene ring doesnt allow, sterically.

A related effect is that methyl 2,6-dimethylbenzoate doesnt undergo basic hydrolysis by the normal BAc2, since it would involve that same tetrahedral intermediate. Instead it goes via teh BAl2 mechanism (i.e. SN2 attack at the methyl group and rate-determining cleavage of the alkyl, rather than acyl bond).

Chemistry - Why are synthetic pH indicators used over natural indicators? Chemistry - Melting point of aspirin, contradicting sources Chemistry - Can a stoichiometric mixture of oxygen and methane exist as a liquid at standard pressure and some (low) temperature? Chemistry - Why does the degree of dissociation change when we dilute a weak acid even though the equilibrium constant is constant? Chemistry - Molecular orbitals used with CCSD(T) geometries Chemistry - Is there a difference between equilibrium and steady state? Chemistry - Why does liquid water form when we exhale on a mirror? Chemistry - Inorganic chemistry handbook with reaction lists Chemistry - Linear Combination of Atomic Orbitals Chemistry - Relationship between the symmetry number of a molecule as used in rotational spectroscopy and point group Chemistry - Why is the Maxwell–Boltzmann formula inapplicable at low temperatures? Chemistry - Why is a 7-endo radical cyclisation favoured over a 6-exo in this synthesis?
Pandas how to find column contains a certain value Recommended way to install multiple Python versions on Ubuntu 20.04 Build super fast web scraper with Python x100 than BeautifulSoup How to convert a SQL query result to a Pandas DataFrame in Python How to write a Pandas DataFrame to a .csv file in Python