Regarding this question, there are two things that should be stated beforehand.

Firstly, the mechanism of the Clemmensen reduction is not well-understood. There are two plausible pathways that have been proposed:1

so, the mechanism for this rearrangement is equally unclear.

Secondly, this compound does not actually undergo rearrangement in the Clemmensen reduction, according to studies by Leonard and Ruyle.2 Curiously, the authors could only isolate the alcohol product. No explanation was offered as to why the alkane was not obtained.

However, α-aminoketones are known to undergo rearrangement when the nitrogen and the carbonyl carbon are in the same ring. Two examples which Leonard and Ruyle studied are offered below:2,3 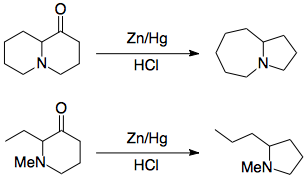 Their proposed mechanism occurs via migration of the C–N bond, following protonation of the carbonyl oxygen. The carbocation is captured by what appears to be hydride, although the existence of hydride is inconsistent with the proposed mechanisms we have seen above. It might just be their shorthand for sequential electron + proton transfer; I can't really tell.

The second half of the mechanism is not explained, but it is plausible to protonate the hydroxyl group and use the nitrogen lone pair to expel water.

The authors posit that the tendency to undergo rearrangement here is related to a "geometrical directing effect": in the case where the nitrogen and the carbonyl carbon are in the same ring, the nitrogen lone pair has a larger opportunity to approach the carbonyl carbon.2 In modern-day terms, this might be considered to be a stereoelectronic effect.

How can this be reconciled with the proposed mechanisms in Kürti-Czakó? Considering that the mechanism of the reduction itself is unclear, I do not want to make any assertions about what the exact mechanism of this rearrangement is. However, I think it would be plausible that C–N bond migration can occur at some stage in the above mechanism - especially in the intermediates where the carbon bears a positive charge.

Orthocresol is correct. The mechanism of the Clemmensen Reduction is enigmatic. Leonard and co-authors provided a 1949-type mechanism where hydride or zinc-nascent hydrogens was the reducing agents of the carbocation while not addressing the issue that the amine is totally protonated in conc. HCl (pKa H3O+ ~-1.7; pKa "NH4+" 9.3]. The nitrogen electron pair is not available as described by Leonard. Orthocresol has provided both prevailing options for the Clemmensen Reduction. I'll focus on the carbenoid route. Structures 2 are three ways of thinking 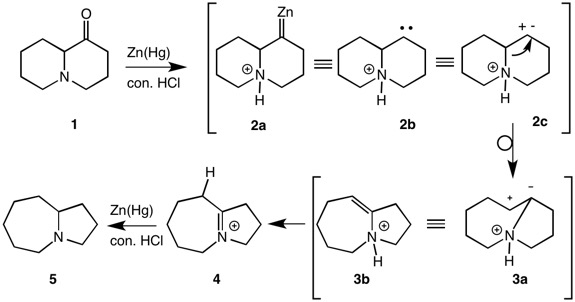 about a carbene for mechanistic purposes: metal bound 2a, electron pair 2b and vacant and filled orbitals 2c. Bond migration in 2c affords 3a, which is equivalent to a nitrogen protonated enamine 3b. However, enamines1,2 such as 1-pyrrolidino cyclohexene undergo facile hydrolysis in aqueous acid. This means that C-protonation occurs to give an immonium salt and, if N-protonation occurs, it is reversible. Given an N-protonated enamine here, isomerization to the immonium salt 4 is expected followed by a 2-electron reduction to afford the tertiary amine 5.