Chemistry - Particle in a box with different barriers between two molecules

for the infinite barrier I'd put an electron on just one side of the box with length L/2, meaning that electron is trapped on one side/face of the ammonia.

For the no barrier part treat the electron as a box with length L meaning it can easily go from one side to the other without barrier (for example maybe the ammonia is at the planar transition state).

For the finite barrier, I'd show tunneling from one side to the second, however, normally for PIB the tunneling region has finite length.

Assuming you have a tetrahedral geometry, according to the Born-Oppenheimer separation of electron and nuclear motion the finite barrier would extend from L/2 to L (or equivalently from 0 to L/2). Therefore the tunneling would be from the middle to the edge.

In the case of ammonia the N atom inversion can be considered as a 1D problem as it moves from one side of the H atoms to the other. There is a barrier of about $2000$ cm$^{-1}$ to cross. The figure shows a calculation which approximates that for ammonia. 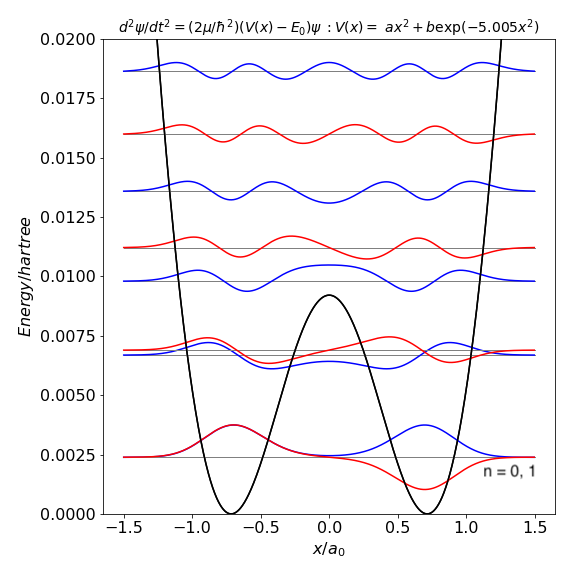 You can see that the energy levels are doubled below the potential and this is because of tunnelling from one side to the other, i.e. one side feels the potential from the other and this splits the levels. (The lowest two levels are so close they appear as one in the figure.) The wavefunctions take on 'odd' end 'even' character, i..e are inverted (odd) or reflected about the middle of the potential. Even above the barrier the wavefunction is distorted compared to that at far higher energy where it approximates to a sine wave as seen in a normal particle in a box.

Chemistry - What happens in an exothermic reaction at the atomic level? Chemistry - Stacking two square (2D) layers to make a 3D close packed structure Chemistry - What does the phase diagram mean by "liquid" at NTP? (The liquid and vapor coexist even when the situation is not on the curve) Chemistry - Under what circumstances would azeotrope exist in non ideal solutions? (when would the dew point curve and the bubble point curve meet?) Chemistry - For a copper/copper sulfate half reaction, do sulfate anions move to the anode and lose electrons? Chemistry - Anti-Markovnikov addition of HCl Chemistry - How does the derivative of concentration make sense? Chemistry - What will be the major product of the reaction between (2R,3R)-2,3-dimethyloxirane and triphenylphosphine? Chemistry - Why isn't cyclopropane considered unsaturated? Chemistry - What makes some chemicals form steep density gradients in solution? Chemistry - What does the intramolecular aldol condensation of 6-oxoheptanal form? Chemistry - What software was used to create these organic reaction scheme figures?
Pandas how to find column contains a certain value Recommended way to install multiple Python versions on Ubuntu 20.04 Build super fast web scraper with Python x100 than BeautifulSoup How to convert a SQL query result to a Pandas DataFrame in Python How to write a Pandas DataFrame to a .csv file in Python