Omnidirectional LED, is it possible?

Telling us what you wish to do in much more detail would be helpful.

I need that LED to be omnidirectional without using a reflector. Ideally it should be only one (Maybe 2 as suggested) because its power source will be very tiny (A capacitor constantly being charged by electrostatic induction), it should light an led for a brief moment.

You need to specify what you want more clearly.

LEDs of the type you have shown have an epoxy resin lens. Their restricted illumination angles are mainly a result of this internal lens.

Most surface mount LEDs have a silicone rubber encapsulant (especially higher power ones) and in most cases the radiation angle is extremely wide - often approaching the 180 degree half-sphere mentioned above. Light drops off at extreme angles away from vertical but the LED is still often visible at close to 90 degrees from the main axis.

You say "without using a reflector".
A simple 'lens' would do what you want.
A wide angle SMD LED (see below) capped by a dome of a suitable plastic (several are suitable) would give you a true half sphere emitter. Two LEDs and a clip together spherical lens would allow a light viewable from any direction.

LEDs are (or were) available that come close to your half sphere need.

Here is an example with a 180 degree viewing angle in X & Y directions.
They are obsolete, low power, inefficint and not available - apart from that one of these is visible across a half sphere and two would illumionate (dimly) a full sphere. 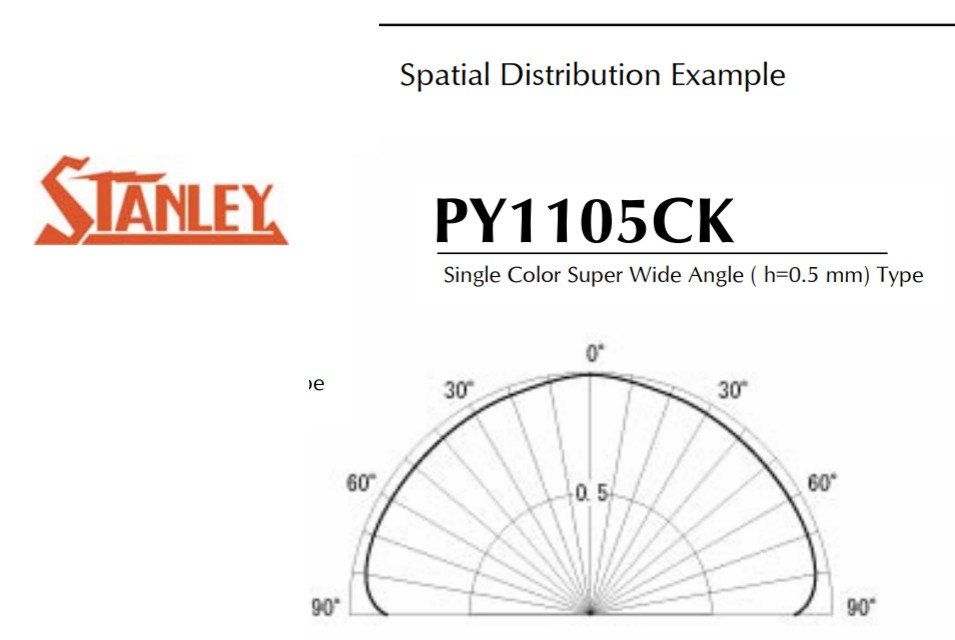 This 170 x 130 degree Osram LED comes close to what you want and is available. A few in a cluster would give half sphere of full sphere output. Output is down to 20% of max at 80 degrees off vertical in one direction and to 60% of max in the other.

You can get LEDs as surface mount in very small sizes. Why not mount an array of them on a globe and use a diffuser?

I put a dob of hot-melt glue on the lens end. I have a sort of cloudy / transparent version.

It destroys the focussing action of the lens, and acts as a sort of light-pipe and diffuser, and increases the effective light dispersion to about 300 degrees, until shadowed by the leads.

Interrupt control in STM32 Which is the preferred approach to PCB layout for signal vs power traces in analog circuits, and things to consider? Converting 8V AC to 8V DC - bridge rectifier gets very hot while idling Why/when is AC-DC-AC conversion superior to direct AC-AC conversion? Memory capability and powers of 2 For a MOSFET, does capacitive gate current only flow through to the source? Why are off grid solar setups only 12, 24, 48 VDC? VBE Multiplier with Emitter Resistance Cancellation Why are MEMS in QFN packages? Does Impedance Matching Imply any Practical RF Transmitter Must Waste >=50% of Energy? Pass USB 3.0 connection through D-SUB connector How do you structure large embedded projects?
Pandas how to find column contains a certain value Recommended way to install multiple Python versions on Ubuntu 20.04 Build super fast web scraper with Python x100 than BeautifulSoup How to convert a SQL query result to a Pandas DataFrame in Python How to write a Pandas DataFrame to a .csv file in Python