I created a repository that contains some tests to help in the understanding of this answer.

The internal design of maps in Golang is highly optimized for performance and memory management. Maps keep track of keys and values that can hold pointers. If the entries in a bucket can't hold pointers, maps just create overflow buckets to avoid unnecessary overhead with GC, which results in more allocations (the case of map[int]struct{}).

We need to understand map initialization and map structure. Then, we will analyze the benchmarks.

There are two methods for map initialization:

Maps are mutable and they will grow on-demand, no matter which initialization method we choose. However, the second method pre-allocates memory for at least hint entries, which results in increased performance.

A map in Go is a hash table that stores its key/value pairs into buckets. Each bucket is an array that holds up to 8 entries. The default number of buckets is 1. Once the number of entries across each bucket reaches an average load of buckets (aka load factor), the map gets bigger by doubling the number of buckets. Every time a map grows, it allocates memory for the new-coming entries. In practice, every time the load of the buckets reaches 6.5 or more, the map grows.

Behind the scenes, a map is a pointer to the hmap struct. There is also the maptype struct, which holds some information about the type of the map. The source code for map can be found here:

Below you can find some insights on how to hack the map type and how to see a map growing:

One important thing to note is that maps keep track of keys and values that can hold pointers. If the entries in a bucket can't hold any pointers, the bucket is marked as containing no pointers and maps just create overflow buckets (which means more memory allocations). This avoids unnecessary overhead with GC. See this comment in the mapextra struct (line 132) and this post for reference.

An empty struct struct{} has no fields and cannot hold any pointers. As a result, the buckets in the empty struct case will be marked as containing no pointers and we can expect more memory allocations for a map of type map[int]struct{} as it grows. On the other hand, interface{} can hold any values, including pointers. Map buckets keep track of the size of memory prefix holding pointers (ptrdata field, line 33) to decide if more overflow buckets will be created (map.go, line 265). Refer to this link to see the size of memory prefix holding all pointers for map[int]struct{} and map[int]interface{}.

The difference between the two benchmarks (Benchmark_EmptyStruct and Benchmark_Interface) is clear when we see the CPU profile. Benchmark_Interface does not have the (*hmap) createOverflow method that results in an additional memory allocation flow: 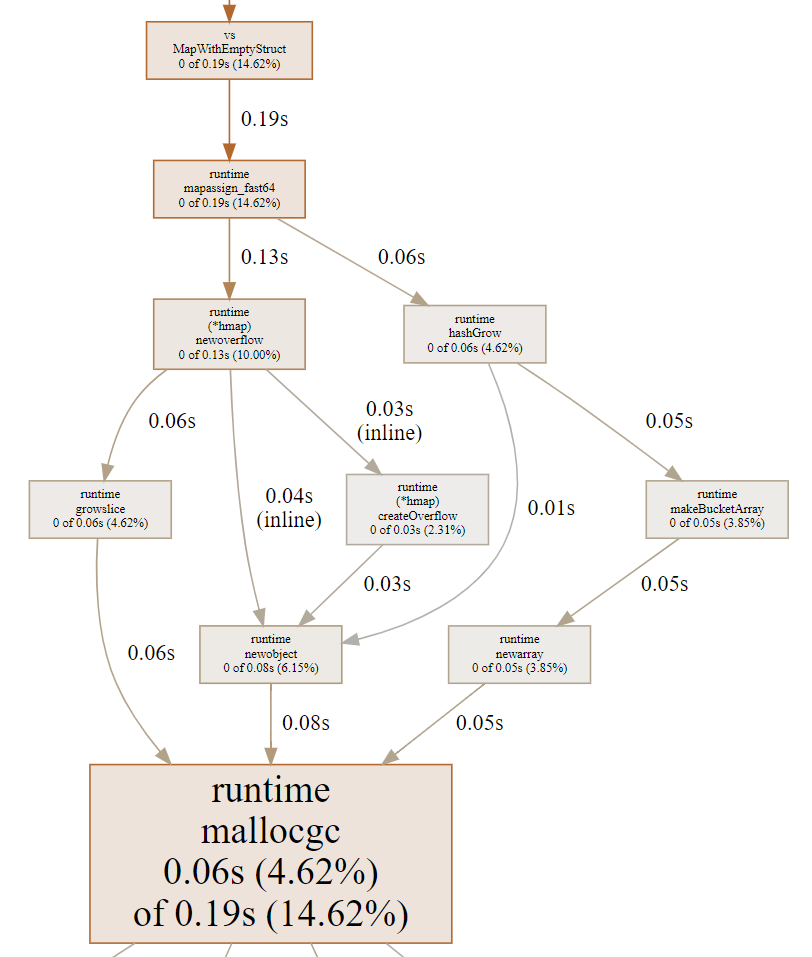 There's nothing wrong with the benchmarking methodology. It's all related to map optimization for performance and memory management. The benchmarks show the average value per iteration. Maps of type map[int]interface{} are slower because they suffer performance degradation when GC scans the buckets that can hold pointers. Maps of type map[int]struct{} use less memory because they, in fact, use less memory (Test_EmptyStructValueSize shows that struct{}{} has zero size). Despite nil being the zero value for interface{}, this type requires some space to store ANY value (Test_NilInterfaceValueSize test shows the size of an interface{} holding a nil value is not zero). Finally, the empty struct benchmark allocations are higher because the type map[int]struct{} requires more overflow buckets (for performance optimization) since its buckets don't hold any pointers.

Find the minimum possible difference between two arrays Docker Compose Mac Error: Cannot start service zoo1: Mounts denied: C - Conversion behavior between two pointers Function call with template parameter Unexpected error on UrlFetchApp.fetch in Google Apps Script using basic authentication How to calculate sums in log-space without underflow? How to find an existing HTML element with python-selenium in a jupyterhub page? Building ionic angular app fails when built from teamcity but succeeds every where else How to sample from DataFrame based on percentile of a column? How to design a neural network to predict arrays from arrays Compare duplicates of images in arrays Laravel app stopped working after upgrading to php 8
Pandas how to find column contains a certain value Recommended way to install multiple Python versions on Ubuntu 20.04 Build super fast web scraper with Python x100 than BeautifulSoup How to convert a SQL query result to a Pandas DataFrame in Python How to write a Pandas DataFrame to a .csv file in Python