I believe that particularly high values of n[V] are unlikely because as you pack more and more electrons in the same region, their repulsion would start to overpower their attraction to the nuclei, meaning the electron density would likely spread out more.

The main constraint on high electron density is not the repulsion between electrons, but the Heisenberg uncertainty principle. Even a single electron has a limited average electron density, given its average momentum (see e.g. here). For single electron systems (hydrogen-like ions), you get the highest electron density by increasing the nuclear charge. According to the virial theorem, as the potential energy of the electron increases (the magnitude, so tighter binding), the kinetic energy also increases. This will go along with a higher momentum, allowing the electron to occupy a smaller volume (i.e. have a higher density). 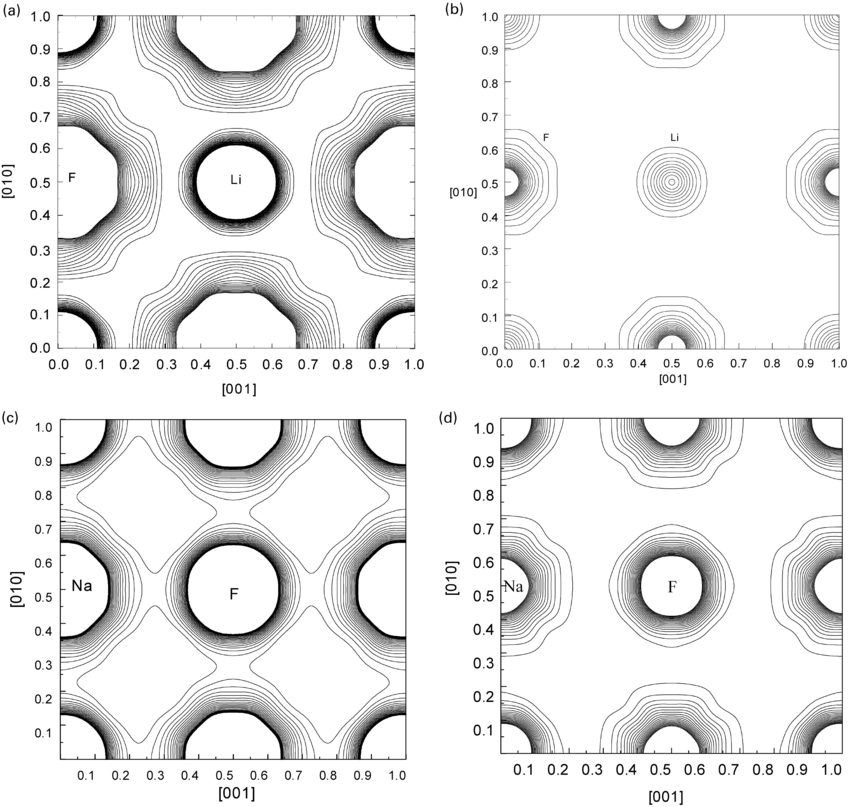 Fluorine, with a higher atomic number, will have higher electron density at the nucleus, but the density is cut off in the figure so you can't see the maximum value.

The innermost electrons would not be shielded, so the maximum electron density for a uranium nucleus with one electron would not be much different from one with 92 electrons. In fact, the binding energy of the inner electrons was used to figure out atomic numbers using Moseley's law.

Is there a maximum value for n[V] above which the mutual repulsion of electrons would mean the density was unreal?

There was a comment from Martin about the use of the word "unreal". I agree with Martin that if you observe a certain high electron density, that is as real as it gets. You might run into a calculation claiming a ridiculously high electron density, and then might conclude that results are not plausible and warrant further research.

So where can I find high electron density?

That would be near the nucleus of the heaviest elements as long as they are stable at least for a while. Using the arguments made above using the uncertainty principle, the binding energy of inner electrons, and the associated momentum of the electron (or looking at the Bohr model), the radius $a_0$ should be proportional to the reciprocal of the atomic number, meaning the electron density increases with the cube of the atomic number.

There is a limit to the maximum value of electron density $\rho_e(\vec{r})$.

It is true that electrons repel each other, so as the electron density increases, the interelectronic repulsion also increases. This means that you can find high electron density only if the nucleus-electron attraction is stronger than the e-e repulsion. You can get this in heavy atoms, as noted in Karstein Theis' answer.

The electron density near the nucleus of the heaviest elements we can synthesise would be the highest we achieve, at least on earth.

But there is a way to increase the electron density even more, and that is by pressure. This is exactly what happens in the cores of stars. The gravitational force for a star is large enough that it starts to push in on the material at the core (does not matter what it is, as long as it consists of nuclei and electrons).

Electrons are fermions, and have to obey the Pauli principle and Fermi-Dirac statistics. So, when you try to push electrons together in the same volume, they will push back. If there is a gas of electrons and we ignore the inter-electronic repulsion for a moment, the pressure exerted by it is — $$\ce{P_e=\frac{(3\pi^2)^{2/3}\hbar^2}{5m_e}\rho_e^{5/3}}$$

This is from a non-relativistic treatment. If all electrons experience relativistic effects, (which you need to consider for high $\rho_e$ values) the pressure is $$\ce{P_{e,r}=\frac{hc}{4}(\frac{3}{8\pi})^{1/3}\rho_e^{4/3}}$$ This type of pressure is usually called the electron degeneracy pressure.

If the star is really massive, the core can experience huge amounts of pressure. Fortunately, as long as the star is "burning" there is an outward radiation pressure from the photons which holds everything together. What happens when the star consumes all its fuel (H and to a smaller extent, He) and stops burning? Well, there is nothing to hold the core against the crushing gravitation, and the electrons and the protons merge together to form neutrons, as the degeneracy pressure is not strong enough to hold back the gravity. This is a neutron star. (If heavier, it may form black hole).

In smaller stars, the electron degeneracy pressure wins, and the star can no longer contract. It stays as a white dwarf. The maximum mass where this can happen is called the Chandrashakhar limit, usually taken to be around $\ce{1.4\times solar mass}$. Note that this value is entirely derived by assuming that the electrons in stars behave as an electron gas (with relativistic corrections applied). You can include the electron-electron or electron-nucleus interactions by a more sophisticated treatment (see this paper, pdf link), but it only changes the value to 1.38 solar mass. So, the electron degeneracy pressure is so large here, that the other terms become negligible.

Then what is the value of the electron density at this mass limit? Well, the thing is, I can't find the value of $\ce{\rho}$ in any of the papers, but there must be a value for this. If I find it, I will update my answer.

Meanwhile, we can get a very rough estimate of the maximum electron density—

Assuming that the star is a sphere under hydrostatic equilibrium, the pressure at its centre must exceed $\ce{\frac{GM^2}{8\pi R^4}}$.(ref.) For main sequence stars heavier than sun, using the mass-radius relation ($\ce{R\propto M^{0.57}}$) gives a radius of about $\mathrm{0.8\times 10^9 m}$ for a star with 1.4 solar mass (by plugging in the mass and radius of sun, and taking ratio). The pressure at its centre must be greater than $\mathrm{5.01\times 10^{13} N/m^2}$. Considering completely relativistic electron gas gives a $\mathrm{\rho_e\approx 2\times 10^{36} m^{-3}}$. Obviously, this is a crude calculation, but you can see that there is a maximum value of electron density. Above the maximum value, the density becomes unfeasible not because of electron-electron repulsion, but because electrons and protons fuse in a nuclear reaction.

Chemistry - What does washing and drying a solution mean? Chemistry - Isomerization reaction involving carboxylic acid derivatives Chemistry - How does a shock, such as the snap of the disk in a reusable hand warmer, trigger the re-crystalization of a supersaturated solution? Chemistry - Do both iodine and potassium iodide turn dark in the presence of starch? Chemistry - Effective core potential and Gaussian basis set Chemistry - How to read a chromatography calibration curve? Chemistry - Molecular structure of iodine nonoxide Chemistry - Étard Reaction of Ethylbenzene Chemistry - Why is 1,2,3,4,5,8-hexahydronaphthalene more stable than 1,4,4a,5,8,8a-hexahydronaphthalene? Chemistry - Reaction of glucose acetal with acetic anhydride Chemistry - How is nomenclature decided in this case (formyl vs oxy)? Chemistry - Possible structure if a compound like AB4 is polar?
Pandas how to find column contains a certain value Recommended way to install multiple Python versions on Ubuntu 20.04 Build super fast web scraper with Python x100 than BeautifulSoup How to convert a SQL query result to a Pandas DataFrame in Python How to write a Pandas DataFrame to a .csv file in Python