Powerful electron withdrawing substituents, like $\ce{-NO2}$ can be interpreted as having a large effect on the $\pu{\pi}$-system of an aromatic ring. Resonance structures can be drawn that put a positive charge at the ortho and para positions and put the electron out in the nitro group, on an oxygen.

This must be adjusted for $\ce{-N(CH3)3+}$, because it has no $\pu{\pi}$ electrons, and we can't draw structures with a double bond between the nitrogen and the ring carbon. It works thru a very strong $\ce{-I}$ effect. However, if we use the concept of hyperconjugation, and donate a $\pu{\pi}$ electron from the ring to the nitrogen and then a methyl group (making it $\ce{-CH3}$), unbounded to any other atom, we can imagine the oxygens in the picture replaced with methyls and will get the same distribution of charge in the ring: a positive charge at the ortho and para positions. This will result in meta substitution if any reaction does occur.

The question is so good that maybe it deserves another correct answer. While my answer above attempts to answer using the criterion mentioned by user57048 (hyperconjugation), hyperconjugation is generally a small effect, but the $-I$ effect of $-N(CH3)3+$ is so large that maybe an entirely different approach could be appealing - not that you could necessarily distinguish between them.

The inductive effect is not in question, and does not need hyperconjugation to explain it. But the $meta$ directing effect, without the possibility of a double bond between carbon #1 on the ring and the nitrogen presents a problem. The reference I used in my first answer also discusses this at length, but I'd like to expand it a bit. 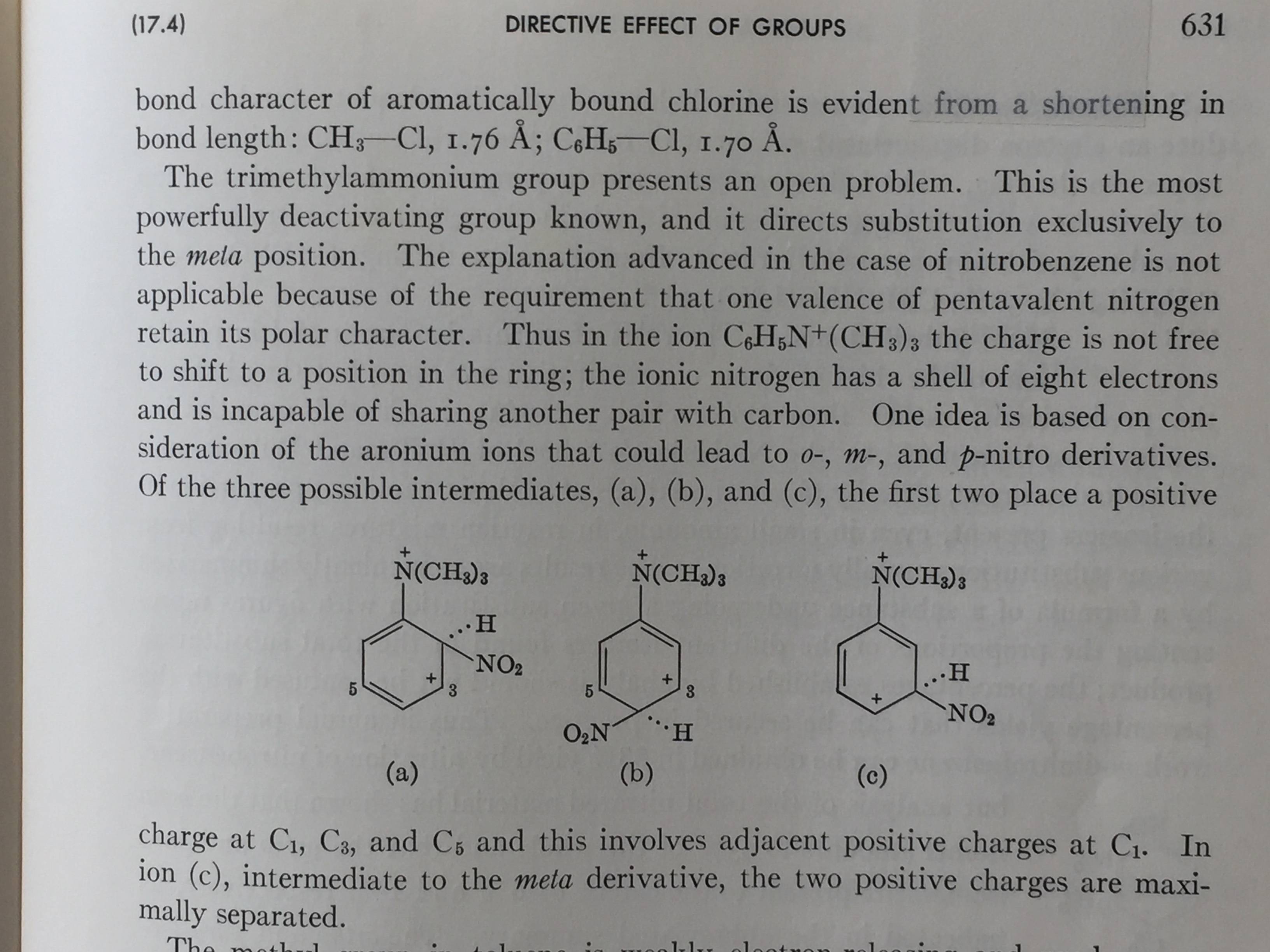 The question mentions the $-N(CH3)3)+$ group, but we need one more thing: an aryl group attached to the nitrogen. And we need one more thing for explaining the $meta$ direction: the transition state. This is what is brought up in the discussion by Fieser, but without using the specific words $transition state$. While in the example of the $-NO2$ group, a charge separation is generated such that it can minimize the $pi$ electron density on the $ortho$ and $para$ positions, with $-N(CH3)3+$, we only have to consider the inductive effect as far as carbon #1. The incoming electrophile carries the positive charge that resonates around the ring and directs it to the $meta$ positions because attaching to the other positions puts a positive charge on the #1 carbon, which would be highly unfavored because it places two positive charges next to each other.

The question seems to have been of long standing. The idea of aronium ion intermediates was put forth by Pfeiffer and Wizinger. The structures shown as aronium ions $a$ and $b$ in the picture are the ones that do not lead to product; $c$ leads to product, and would seem to be a transition state (or close to it) rather than a true intermediate.

Chemistry - Are children's sparklers based on a magnesium reaction? Chemistry - What kind of chemical used in a chromatography run could be denoted with the letters D.H.? Chemistry - Lewis Structure For H2SO4 Chemistry - What happens to the argon in the Haber-Bosch process? Chemistry - Irreducible representations and system states connection Chemistry - Synthesis Golf VIII: 4,6-Diacetylhygrophorone A12 Chemistry - How to name Hg[Co(SCN)4]? Chemistry - Rate of reaction for hundred reactants Chemistry - Where does magnetic inequivalence come from? Chemistry - Arrows used in chemical reactions Chemistry - Etymology of saturation degrees (-ane, -ene, -yne) in aliphatic compounds Chemistry - Assigning the IUPAC name of this compound
Pandas how to find column contains a certain value Recommended way to install multiple Python versions on Ubuntu 20.04 Build super fast web scraper with Python x100 than BeautifulSoup How to convert a SQL query result to a Pandas DataFrame in Python How to write a Pandas DataFrame to a .csv file in Python