Chemistry - Is there any electronic component to water conductivity?

I agree with the commenters that electrical conduction is very unlikely, but it's worth going through some possible mechanisms:

I'm not suggesting that either of these theoretical possibilities actually ever occurs, just that these are the mechanisms that seem most likely to me.

Actually electronic conduction can occur in water. You'll probably find it in your daily rounds, if you know where to look.

Water, like all condensed matter, has a band structure. This is discussed with some references below, as the presence of band structures in liquids is not as intuitive as that in crystalline solids. Its valence band is filled with the electrons from the bonding molecular orbitals of the water molecules, while the conduction band that lies higher in energy, derived from antibonding orbitals, is empty. As with insulators generally, transport of an electron into the conduction band requires a much larger amount of energy input than is available to an average molecule from thermal energy, so we expect hardly any electrons make to this transition and be electrically conducted.

But in the presence of an electric field, which is necessary to make electrical conduction meaningful anyway, the energy levels of the bands are not uniform; they depend on the position in the electric field as well as the molecular orbital structure. An energy level corresponding to the valence band at one place may correspond to the conduction band some distance away. And that means an electron can become a conduction electron by quantum tunneling through that distance. This picture (source[1]) 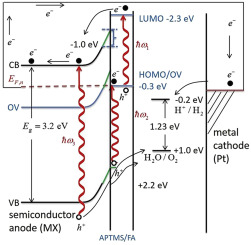 shows what is happening to the band structure given such a strong electrical field, in this case at an electrode surface. Which gives a hint as to what's coming...

There's a catch. The chapter in our quantum mechanics textbook that describes tunneling also tells us that tunneling is most probable if the particle/wave has to move only a short distance. With the electric fields we ordinarily experience macroscopically, the distance required to get the valence and conduction bands to line up energetically is too long; the tunneling probability is too small to notice. But if there were a field of at least hundreds of millions of volts per meter, then the required distance becomes short enough to make significant tunneling a realistic scenario. We have broken the insulator down.

What sort of monstrous device is needed to create such a field? How about the battery in your car or smoke detector? As illustrated here is a basic form, electrochemical reactions at solid electrodes depend on forcing electron transfer into the electrolyte; the surface automatically builds up enough of an electric field to enable electrons to tunnel and react. This conduction occurs over only a few atomic layers, so we don't see the electronic conduction in the watery phase directly. We can, however, see the resulting reaction and, of course its energy input or output as voltage.

The band structure of water has been widely studied. For example, this paper[2] uses calculations on water clusters to identify a gap of 6.9 electron volts in water, exceeding even the electronic band gap in diamond. Another reference from this answer gives an even higher band gap. Quoting from that answer:

do Couto et al have published an article[3] characterizing the density of states (band structure) of water using DFT theory combined with MC sampling. Extrapolating from clusters to bulk water, the HOMO-LUMO gap is 8.55 eV (Table 3).

(Additional discussion in the referenced answer.)

Besides the useful answers above, search the keyword "aquated electron" or better still "solvated electron". People have been studying theses systems.

Of course a free electron cannot exist in water before that will reduce water. It would an interesting thought experiment to irradiate water with gamma rays and simultaneously measure conductivity. You can search along those lines. On the other hand, Grotthus mechanism takes a "proton" movement in solution. For example people still do not fully understand as to why H+ ion has the highest conductivity in aqueous solution. The Grotthus mechanism was proposed a century ago and it resurfaced again.

Any conduction by non-ionic electrons in water would require some concentration of these electrons. Mithoron pointed out the extreme reactivity of sodium as an example of how it couldn't work. Using a less-reactive metal, such as zinc, might put electrons into the water, but they would be quickly attracted to aquated H+ ions that exist at 10 e-7 moles/liter and turned into molecular hydrogen. The zinc would go in as Zn++.

So the prediction of electronic conduction in water has to be negative, because even pure water contains an electron-grabbing, electron-neutralizating component that wouldn't allow free electrons to travel across any significant distance between electrodes.