Apple - Is there a program that allows you to create keyboard shortcuts that consist of regular keys?

This can be done in Karabiner, but is counter-intuitive and turns common keyboard usage upside down (check the first sentences of Monomeeth's answer).

An example for [M+N] to F13 is already provided in the presets of Karabiner: 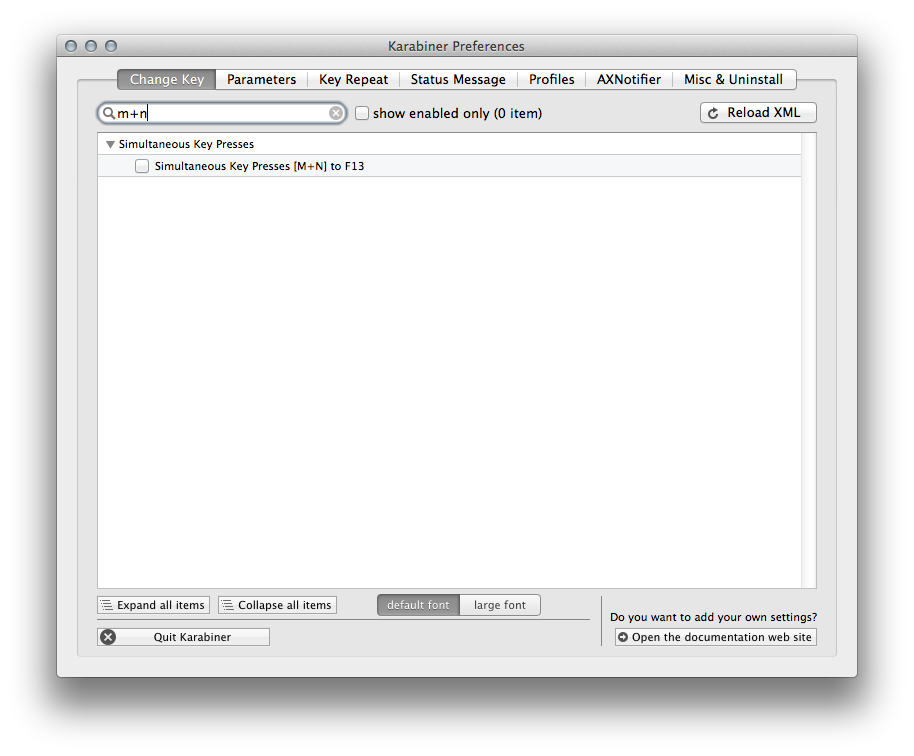 Mapping 1+0 to F16 would require to add the following snippet to private.xml:

By defining an additional vk_lazy key (i.e. 0) it should also be possible to first press 0 and then 1 and depending on the first key up either send an F16 or write 01, which is a more comfortable behavior typing "shortcuts" on a keyboard.

I don't believe what you want to do is going to be possible if Karabiner can't do it.

The reason we have modifier keys (i.e. control, option, shift, and command) is that they need to modify the standard alphanumeric keys so that they're being recognised as something else besides their alphanumeric value. Let me explain this further:

You may want to refer to the: macOS Human Interface Guidelines - Keyboard Shortcuts page for a better understanding of Apple's guidelines to developers on this.

As an aside, when developers create games and a key is used for a specific purpose (e.g. the Z key moves the character left) the game is still recognising the Z key as a 'Z' but has just been programmed to accept the 'Z' value as meaning the character moves left.

Any software that appears to change the action of a key press (e.g. games that allow you to customise your controls, or utilities such as USB Overdrive, ControllerMate, etc) still accept the default key value rather than needing to modify them, and that's how they achieve their function.

For example, a user can use USB Overdrive to map a key (let's say the T key) to a particular function with or without the use of modifier keys, but when they're used without a modifier key they're still being recognised as having their original input. So I do not think they're going to be useful to you either, and of course, they're not designed to create keyboard shortcuts per se. However, you could check them out anyway (they're free to try) just in case you can trick either of them to do what you want:

Apple - What's the structure behind Apple version numbers / build numbers? Apple - Downsides of encrypting disk with FileVault Apple - MacBook Air occasionally freezes when external monitor is connected Apple - Unable to load https websites on safari Apple - Terminal: map super/command key in stty Apple - Get serial numbers of connected USB devices Apple - How to make 'grep' work like in Ubuntu? Apple - Can I charge the 12" macbook with Nintendo switch charger? Apple - iPhone makes shutter sound when taking photos despite being on mute Apple - macOS Sierra Apple Watch Unlock - persistant iCloud Sign in required dialog Apple - Why are my app settings not appearing in the Settings app? Apple - Bad configuration: cannot ssh
Pandas how to find column contains a certain value Recommended way to install multiple Python versions on Ubuntu 20.04 Build super fast web scraper with Python x100 than BeautifulSoup How to convert a SQL query result to a Pandas DataFrame in Python How to write a Pandas DataFrame to a .csv file in Python