Chemistry - Is the triplet state of the cyclopentadienyl cation really aromatic?

The (quite understandable) confusion here arises over the interpretation of the word "aromatic" or "anti-aromatic". These terms can be used differently depending on context, and there is no unified physical description of (anti)aromaticity (although progress has been made in recent years, e.g. nucleus-independent chemical shifts, etc.)

When anybody claims that something is aromatic, it is therefore imperative to check the context, and to figure out what their basis for assigning aromaticity is. In this case, the assignment of the triplet excited state of the cyclopentadienyl cation as aromatic by Costa et al.1 is based on Baird's rules. In turn, looking up Baird's article2 reveals that his assignment of (anti)aromaticity is based on the concept of Dewar resonance energies (DREs).

The concept of DREs has been explained by Baird elsewhere.3 Essentially, it is based on the comparison of idealised cyclic structures with a reference acyclic structure; so, benzene is compared with hexatriene, and cyclobutadiene ($D_\mathrm{4h}$) is compared with butadiene. For the cyclopentadienyl cation, the relevant comparison is with a penta-2,4-dien-1-yl cation.

The question thus arises as to how this comparison can be made. The way that is commonly taught, at introductory level, is to use Hückel molecular orbital (HMO) theory. So, let us use cyclobutadiene as an illustration. Note that within HMO theory the singlet and triplet configurations are of the same energy, as electron-electron repulsions are not taken into account. 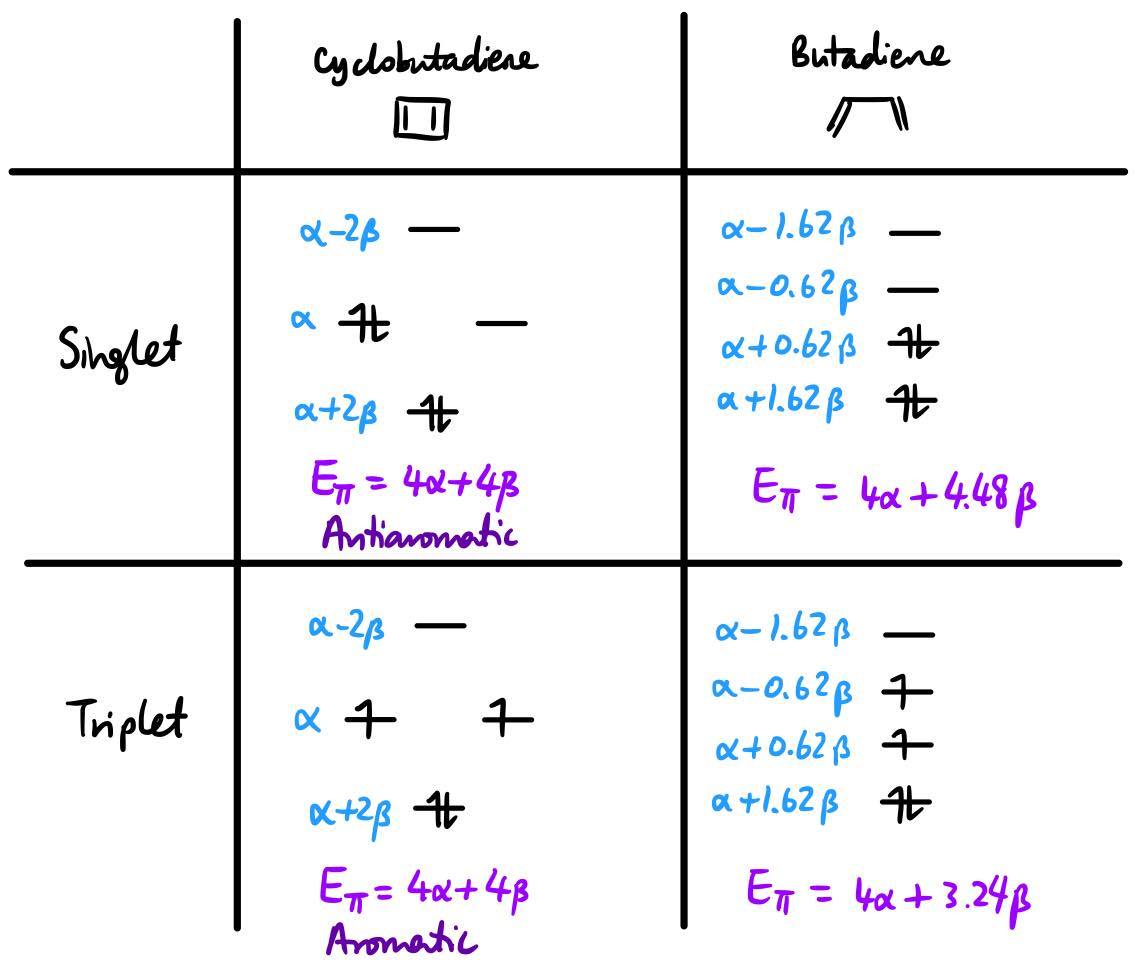 There are two things of note here: firstly, the Jahn–Teller distortion in cyclobutadiene isn't relevant for the purposes of finding whether it is aromatic or not; the aromaticity is assigned based on a hypothetical planar structure with no bond length alternation. Secondly, the aromaticity is determined with respect to the corresponding electronic state of the acyclic reference. That is to say, the triplet state of cyclobutadiene is compared with the triplet state of butadiene and not the singlet state of butadiene.

Qualitatively, we have reached the correct conclusion. However, this was not the approach that Baird used. We will restrict our discussion now to that of triplet states, since it is relevant to the question. Baird used a more sophisticated method involving perturbation theory. That is, Baird used MO theory to calculate the stabilisation/destabilisation that would occur upon bringing together two radicals to form either the cyclic compound or the acyclic compound.

This is confusing, so a bit more explanation is in order. The triplet state of butadiene can be described by the promotion of a π electron to a π* electron. Upon this promotion, the C=C bond twists until it has a dihedral angle of 90°, which corresponds to the breakage of the π bond.

In the triplet state of butadiene (1 ($T_1$)), the π systems of the allyl and methyl radical fragments are orthogonal to each other; they are simply joined by a C–C σ bond. Hence the total π-bonding energy of 1 ($T_1$) is simply equal to the sum of the individual π-bonding energies of 2 and 3.

On the other hand, the triplet state of cyclobutadiene (4 ($T_1$)) can still be considered to be an allyl fragment plus a methyl fragment.4 The difference is that, due to the planarity of the ring, the two radical systems are forced to overlap in a π manner (depicted by the red lines).

Finally, we get to the crux of the answer. (I make no apology for taking so long to get to it - I thought the buildup was pertinent.) Baird first constructed the MOs of the radical fragments 2 and 3, and labelled each MO with their symmetry under a reflection. The mirror plane is drawn in light blue; antisymmetric MOs are in red and symmetric MOs in green. 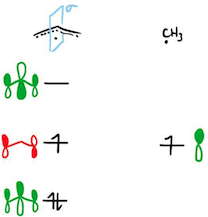 The second type of interaction (I leave the reader to guess what it was called) involves the interaction of the SOMO on one fragment with doubly occupied or empty orbitals on the other fragment. In this case, the SOMO of the allyl radical does not find any symmetry match on the methyl radical, and so there is again neither stabilisation nor destabilisation. However, the SOMO of the methyl radical can overlap with both symmetric MOs of the allyl radical; this is a stabilising interaction.

Overall, therefore, the π-type overlap between the two radical fragments leads to a favourable interaction. As such, triplet cyclobutadiene is considered to be aromatic.

For the cyclopentadienyl cation, one can construct an analogous diagram, starting from an ethene radical cation and an allyl radical. 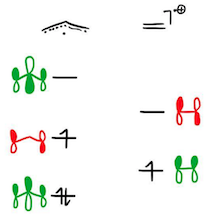 Again the SOMOs do not match in symmetry, so the Type I interaction is necessarily zero. And again, the Type II interaction is stabilising; this time, both SOMOs find symmetry matches on the partner fragment. Based on this analysis, the triplet state of the cyclopentadienyl cation is indeed aromatic.

At this stage one may wonder: when two orbitals interact, the only possibility of destabilisation is if both orbitals are fully filled. Since both interactions involve orbital overlap between not-fully-filled orbitals, how can any of them be destabilising, and how can anything be anti-aromatic? To address this issue, and for the sake of completeness, let us analyse the case of benzene. We expect the triplet state of this 6π system to be anti-aromatic. The interaction diagram may be constructed from two allyl radicals:

First, we see that by symmetry, the Type II interaction is identically zero. Now, we turn to the Type I interaction. Surely the overlap of two SOMOs must be a bonding interaction? The astute reader will notice, though, that we are talking about a triplet state of benzene. The overlap of the two SOMOs still forms a bonding and an antibonding orbital, but if we were to put both electrons into the bonding orbital, we would obtain a singlet state.

The concept of excited state aromaticity has been reviewed by Rosenberg et al.5, which is a good read (I found the explanation more accessible than that in Baird's original article2).

Let us look at the cyclopropenyl system, which is simplest to work with and gives the most prominent effects. To assess aromaticity, the $\pi$ electron stabilization compared with isolated $p$ orbital is modeled using Huckel MOs, and the cyclopropenyl ring is compared with the open-chain allyl system having the same charge and spin.