There are two pathways that phenyllithium could follow - it could deprotonate, but there really not any reactive protons, or it could do lithium-halogen exchange with one of gem-bromines. This second pathway will lead to a carbene by loss of $\ce{Br-}$ and the carbene (a highly reactive intermediate) will rearrange to give allene $\ce{H2C=C=CH2}$.

This method is documented:

The alkene formation is not correct under this conditions. This is an example of Doering–LaFlamme allene synthesis, a reaction of alkenes that converts to allenes by insertion of a carbon atom introduced in 1958 (Ref.1; see user user55119's comment). In abstract, it states that:

In a two-step sequence, of which the first step involves addition of dibromocarbene to an olefin and the second involves reaction of the resulting substituted 1,1-dibromocyclopropane with magnesium or sodium, allenes are obtained. The overall structural change involves the insertion of a single carbon atom between the two of the original double bond and therefore represents a novel way of increasing carbon chain lengths by one atom.

In your example, the compound has undergone the insertion of additional carbon atom (between two $\mathrm{sp^2}$-carbon atoms of the original double bond). Therefore, it's now the rearrangement part assited by organo lithium compound, the mechanism of which is depicted in following diagram (Ref.2): 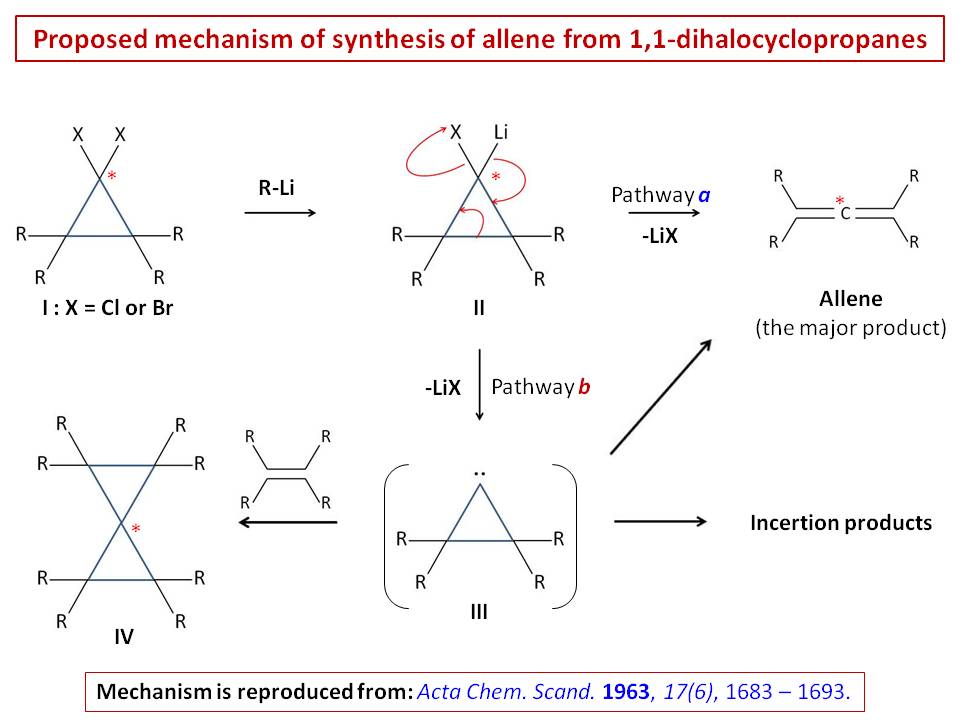 Accordingly, the first step of the gem-dihalocyclopropane (I) with alkyllithium can be depicted as a halogen-lithium inter-conversion with formation of a 1-lithio-1-halocyclopropane derivative II. The reaction is dependent on the nature of both halide and the lithium reagent, but its mechanism is not fully understood (Ref.2). For example, bromides react much more readily that the corresponding chlorides, and butyl lithium is generally much more reactive than methyllithium. It is expected that intermediate II would readily eliminate lithium halide as discussed in Ref.1. This may occur by two different mechanisms: (i) Pathway $\color{blue}{\bf{a}}$: Concerted elimination and ring openig to an allene; or (ii) Pathway $\color{maroon}{\bf{b}}$: An $\alpha$-eleminatin to the carbene intermediate III (Ref.2). The author comments that the pathway $\color{blue}{\bf{a}}$ may well be the way by which allenic product has been formed, although it appears that cyclopropyl anions have considerable stability. However, the formation of non-allenic isomers (byproducts) in a number of these reactions is difficult to explain (Ref.2).