Is changing pitch enough for anonymizing a person's voice?

A simple pitch change is insufficient to mask a voice, as an adversary could simply pitch the audio back to recover the original audio.

Most voice modulators use a vocoder, not a simple pitch change. The term "vocoder" is unfortunately rather heavily overloaded these days, so to clarify I mean the type that is most generally used in music, rather than a phase vocoder, pitch remapper, or voice codec.

The way this works is as follows:

A rather crude diagram of an analog approach is as follows: 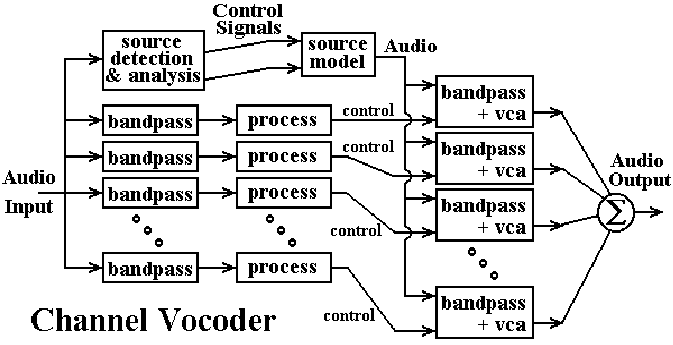 The audio input is split into a number of frequency bands using band pass filters, which each pass through only a narrow frequency range. The "process" blocks take the results and perform some sort of amplitude detection, which then becomes a control signal to the voltage controlled amplifiers (VCAs). The path at the top generates the carrier waveform, usually by performing envelope detection on the input and using it to drive a voltage controlled oscillator (VCO). The carrier is then filtered into individual frequency bands by the bandpass filters on the right, which are then driven through the VCAs and combined into the output signal. The whole approach is very similar to the DSP approach described above.

Additional effects may be applied as well, such as pre- and post-filtering, noise and distortion, LFO, etc., in order to get the desired effect.

The reason this is difficult to invert is that the original audio is never actually passed through to the output. Instead, information is extracted from the original audio, then used to generate a new signal. The process is inherently lossy enough to make it fairly prohibitive to reverse.

tl;dr– It's not generally reversible, but it might still be reversed in practice.

Analogy: Reversibility of reducing a name to its length.

Consider a reduction method that takes in a person's first name and gives the number of letters in it. For example, "Alice" is transformed into 5.

This is a lossful process, so it can't be generally reversed. This is, we can't generally say that 5 necessarily maps to "Alice", as it might also map to, e.g., "David".

That said, knowing that the transform is 5 still contains a lot of information in that we can exclude any name that doesn't transform into 5. For example, it's obviously not "Christina".

So now say that you're a police detective, trying to solve a case. You've narrowed down the suspects to Alice and Bob, and you know that the culprit's anonymized name was 5. Sure you can't generally reverse 5, but, does that theoretical point really help Alice in this case?

In the good ol' days, before computers and such, it may've been enough to lossfully transform one's voice. Then if a third party wanted to recover the original speaker's voice, they couldn't – which, back then, would've probably been it.

Today, we can use computers by:

No it's certainly not secure.

If I were to do it, I would use speech to text then dictate using a common voice like Stephen Hawking's. That completely eliminates any actual voice information.

The only thing left would be to anonymise your style of dialect by formalising/normalising your vocab/sentences.

Honestly that latter stage is extremely difficult. To normalise a thought is extremely complex. You would be divulging personally identifiable information without it though.

Is it safe to send sensitive data in the post body to an azure function? Is it more secure to encrypt separate customers' data with separate keys? Is HTTPS required for local network server to server communication How are hashing algorithms useful if the implementation is public? Is it dangerous to pass documents from an old infected laptop to a new one? What is the difference between a certificate and a private key? Is NTFS encrypted by default? InfoSec certifications for global startup Can you find out how big the changes are by comparing two hashes? Is there any point in having the HSTS header enabled when using HTTP/2? Does "=cmd" CSV injection still exist in 2020? Threema: Are received messages exposed, when sender's private key gets compromised?
Pandas how to find column contains a certain value Recommended way to install multiple Python versions on Ubuntu 20.04 Build super fast web scraper with Python x100 than BeautifulSoup How to convert a SQL query result to a Pandas DataFrame in Python How to write a Pandas DataFrame to a .csv file in Python