There is a simple (some might say simplistic) way to get an intuition about this and it involves thinking at the molecular or atomic level rather than about the bulk properties of the reaction (the thermodynamic view).

This view is a little simplified but it gives the right intuition about the problem.

As mentioned above, it is best to first assume that activation energy is temperature independent. The number of molecules that have sufficient energy to do the reaction, can now be calculated via the Boltzmann distribution. The textbook "Physical Organic Photochemistry" from Anslyn & Dougherty has a very good picture to visualize this. 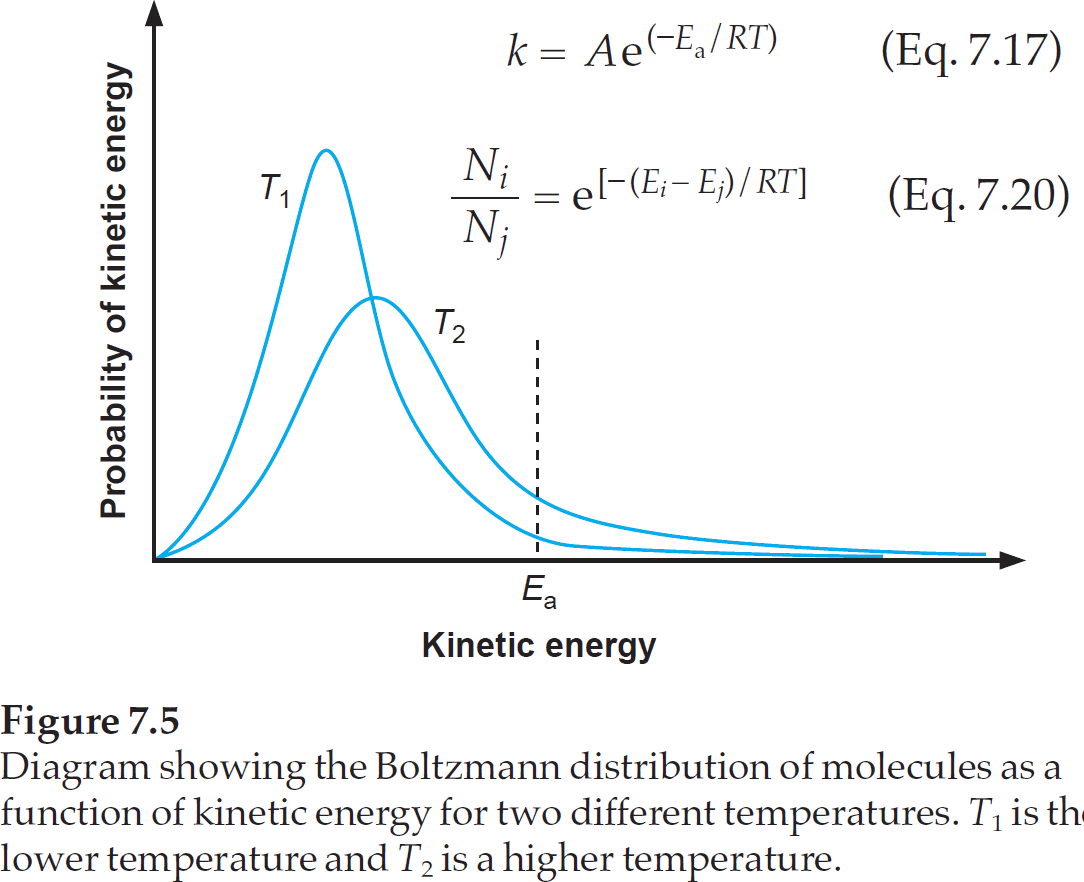 Note that Eq. 7.17 is the Arrhenius equation, and Eq. 7.20 is the Boltzmann distribution.

Another thing mentioned is the dependance of Activation energy $E_a$ on temperature $T$. This is best illustrated by Figure 7.6 of the Physical Organic Photochemistry-book; it shows that the reaction coordinate diagram (shown on the right) must actually be seen as an energy surface (shown on the left). 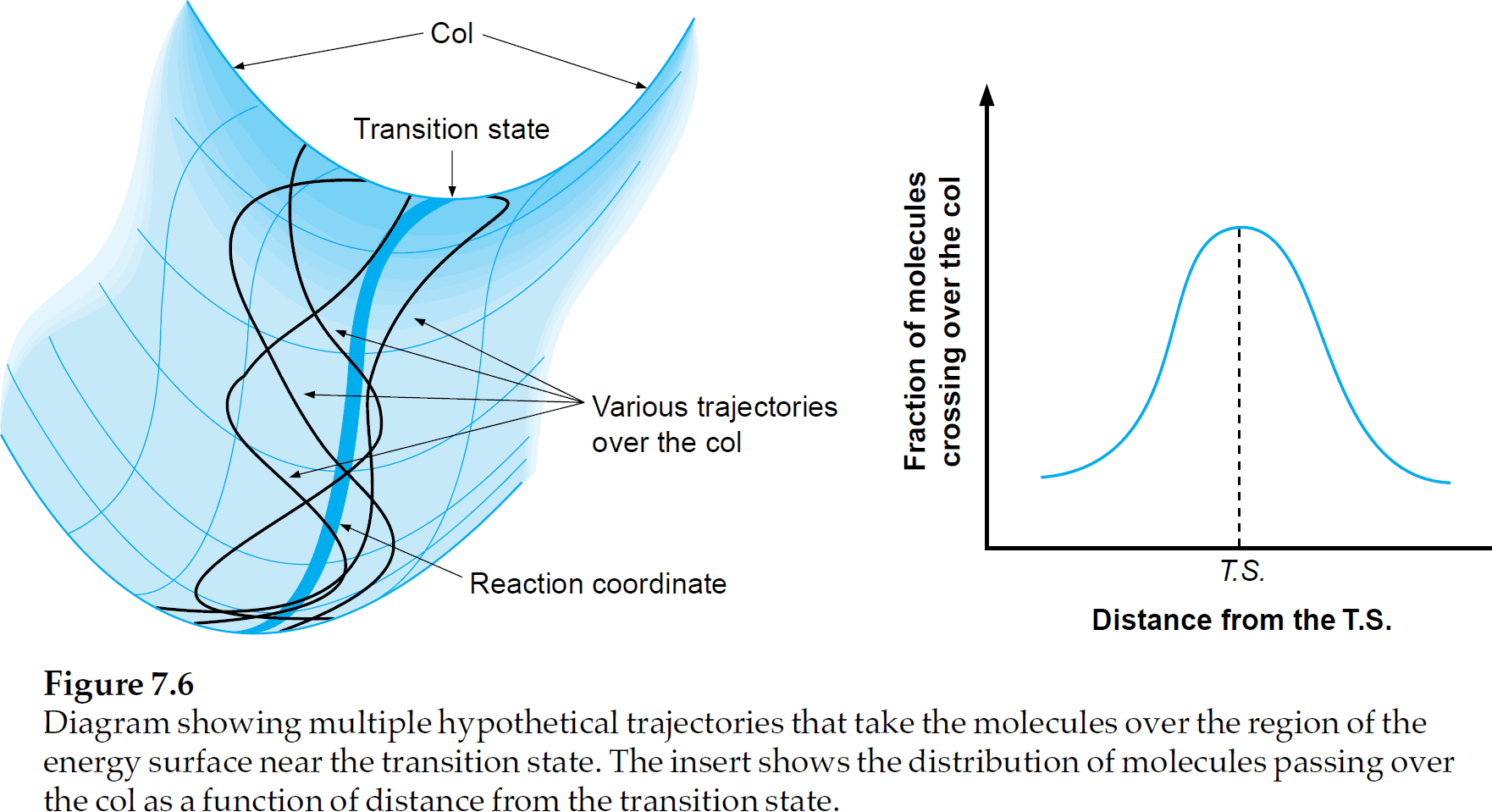 At higher temperatures, there is more vibrational/rotational/translational energy, in total there are 3N degrees of freedom. Only one of the vibrations will lead to an effective reaction; e.g. the bond of interest to be broken. This is why the length of that bond is chosen as a reaction coordinate.

Thermal energy, however, will be distributed over all degrees of freedom, according to the Maxwell–Boltzmann distributions. The point is that, at a higher temperature, there will be more paths over the transition state than just the path that walks in the valley of the energy surface.

According to page 368 of "Anslyn and Dougherty - Modern Physical Organic Chemistry", the effective activation energy ($E_a$) can be connected to enthalpy of activation ($\Delta H^\ddagger$) via an equation. For a single-step unimolecular or bimolecular reaction, the following equation holds:

According to the internet, it may be generalized for single-step multimolecular reaction as follows:

Let's take a look at what the consequence of this $E_a$-temperature-dependence is. Let's plug it into the Arrhenius-equation!

Before I start, I want to make one final change to activation-ennergy-equation. For convenience, I define $n = (1-\Delta n^\ddagger)$, so that upcomming equations appear less scary. Note that $n$ is generally 1 for reactions in the liquid-phase, but $n$ may be 2 in the case of reactions in the gas-phase.

Below, I start with the original Arrhenius equation, and then substitute $E_a$ with eq. 3. I then try to simplify.

Now, because $A$ is the "pre-exponential Arrhenius constant", I think we can make our life easier by including the $e^{-n}$ term in this constant. For as far as I know, changing $n$ would mean changing reaction mechanism, which is (I suppose) not so easy in practice, and generally not done in kinetics studies. Keeping this in mind, we may state the following:

According to Arrhenius equation, we must conclude that temperature dependence of activation energy is irrelevant on the kinetics of the reaction, because it just changes the pre-exponential factor with a non-temperature-dependent constant.

If you try to determine the value of activation energy or reaction Gibbs energy, via kinetics, however, Arrhenius is far from ideal, because $E_a = - n R T \ln(\frac{k_1}{A})$, and if you go deeper on Wikipedia, you'll find out that the pre-exponential factor $A$ may also depend on temperature and other fudge factors.

I think that, if you want to determine information on the energy of a reaction, it is better to use the Eyring equation, because it has no fudge factors in it. I'll give it below, just for completeness, but I'll stop before I'll go off topic.

Activation energy has a term that is proportional to temperature according to transition state theory (at least). This relies on the definition of activation energy as the parameter