If Newton's third law is true, why do things compress?

Imagine you are in a crowd of people. A huge crowd, with everyone, almost squeezed together. Imagine you run into the crowd. In that case, you will have an almost rigid body, because, you apply a force on him, he applies a force back on you, you stop, but he will have a force, which will be balanced by the next person and next and so on till you reach a wall. 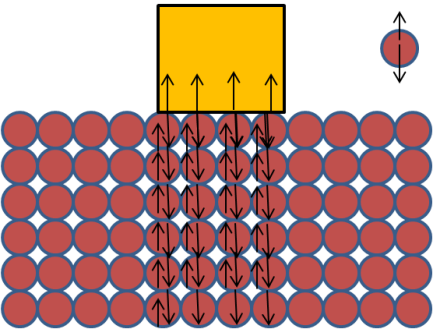 But, if the crowd has a little less number of people, or more like people standing in rows holding hands to form a chain, it will be different. If you run into the crowd from outside, you will push a few people, and they will accelerate (inelastic collision) and you and the other person moves with the same velocity as you, but you are not falling into the person. He exerts an equal force, thus preventing you from sinking into him. But as there is no other person to provide an equal force on him, he starts falling in till he reaches another person because of the unbalanced forces on him

But that does not mean that he is not moving, because he is, and if you were large enough it would be similar to the case you talk about. Several people moving in a localized region that would 'appear' as if the forces are not equal. But if you go a bit more closer, you will see that it is not violated.

The sponge is not one body, rather it is like the crowd. The particles can move, to some extent, independent of the other particles. So, when you push a sponge, you are actually making some sponge mass to move, like crashing into the crowd.

So, Newton's third law is not violated

This would suggest (to me) that every surface should put a force exactly opposite the weight of the body.

is false. As a simple counterexample, in an elevator the normal force acting on you by the floor when the elevator starts moving upwards has to be larger than your weight in magnitude in order for you to accelerate you upwards.

Compression occurs because of Newton's second and third laws.

The crux of the issue is what these laws really mean (and a little bit treating the sponge like a whole, single object). You know the laws, but we have to dig into them to make the answer clear.

The first problem is that this law is often abbreviated to "force equals mass times acceleration." It is critically important to note, however, that

describes the net force acting on an object - the sum of forces on that object.

The second problem is that this law is given to us in terms of "actions" and "reactions," which are mathematically meaningless. Instead, think of actions and reactions as two halves of a pair of forces that always occur whenever anything happens.

Before you put the weight on the sponge...

...the net force on both objects is zero.

Both are subject to Earth's gravity. Both are sitting on the table (or whatever), which is, itself, pushing on the Earth, all equally pushing back on each other. Their net forces are all zero, therefore their accelerations are all zero. They aren't going anywhere.

As you put the weight on the sponge...

In Newtonian mechanics, we tend to treat objects such as sponges like whole, discrete things, and this is incredibly convenient. It is important to remember, however, that nothing is truly this way. Sponges, like everything else, are made of molecules.

Zooming in, the molecules which constitute the sponge are in equilibrium with each other before the experiment as well. They are some natural distance from each other due to intermolecular, electromagnetic forces, which result from whatever property makes sponges the way they are. This is a rabbit hole of explanation beyond the scope of the question.

In this moment, Newton's third law is not violated. The sponge is moving and simply isn't experiencing the full weight of the object compressing it.

We do know, however, that the force exerted by the sponge on the weight in return reduces the weight's net force and therefore reduces its acceleration.

Following through (keep this in mind when you get to the section about Hooke's Law):

As the sponge's molecules get more and more compressed, they also become less and less able to compress. This is to say that the magnitudes of the intermolecular electromagnetic forces become greater.

Eventually, these forces overcome the downward net force of the weight and it begins to slow down. During this time, the weight is still falling because it still has velocity. The force exerted by the sponge on the weight is momentarily greater than the weight of the object.

This phenomenon is the same reason that objects seem heavier when they are falling (e.g. it might be easy to hold a stack of books, but difficult to catch a stack of books).

The result is that the weight bounces upward. This effect will vary depending on whether or not you carefully place the weight down or drop it (how much kinetic energy the weight has).

...the molecules of the sponge will all be compressed according to the new sum of force acting on them (due to gravity on themselves, the weight of all the sponge molecules above them, and the object sitting on the sponge).

This new net force is once again zero, but each action/reaction pair of forces is greater in magnitude.

Making all of that easier with Hooke's Law:

In the 17th century, Robert Hooke simplified this whole process with a law which looks like

where $F_s$ is the force required to deform a spring by length $x$.

$k$ is a value called the spring constant and is different for every type of spring-like object. This is the value one would use to take those aforementioned intermolecular electromagnetic forces and reduce them to a nice, easy constant. Someone else could then reference that value and predict the compression of a similar sponge in the future.

Does that answer your question?

How can a photon collide with an electron? Shouldn't resistance only affect the kinetic energy of an electron? Intuition behind Bernoulli's equation How does quantization arise in quantum mechanics? Why does a liquid not rotate with the container? Qubits of higher dimension Numerical calculation of a quantum field's observables What do the fixed points of a RG equation mean and what are its importance? Why is the answer different with energy conservation vs forces? Covariant vs contravariant vectors How does a floating object affect the hydrostatic pressure in the fluid? Why gauge transformations does not/cannot change a quantum state?
Pandas how to find column contains a certain value Recommended way to install multiple Python versions on Ubuntu 20.04 Build super fast web scraper with Python x100 than BeautifulSoup How to convert a SQL query result to a Pandas DataFrame in Python How to write a Pandas DataFrame to a .csv file in Python