If increasing applying energy to an atom excites electrons, why does electrical conductivity decrease as temperature increases?

Electrical resistance arises because electrons scatter off the crystal lattice formed by the atoms making up the metal. The kinetic energy ends up transferred to the lattice where is appears as vibrations of the lattice i.e. heat. If the lattice is already vibrating, i.e. already hot, then it in effect presents a bigger target and the scattering increases and this is why conductivity of metals falls with temperature. If you heat the metal you increase the amplitude of the lattice vibrations and the electrons are scattered more strongly by the vibrating lattice.

However something like the effect you describe is seen in semiconductors. In many semiconductors the energy difference between the energy bands and gap states is comparable with $kT$. If you heat a semiconductor you can excite electrons and that does increase the conductivity. Just as in a metal the electrons are scattered by the lattice, and this scattering increases with temperature, however at moderate temperatures the excitation of the electrons wins and the resistance goes down.

For example look at this graph of the the conductivity-temperature curve for the metal tungsten and the semiconductor silicon: 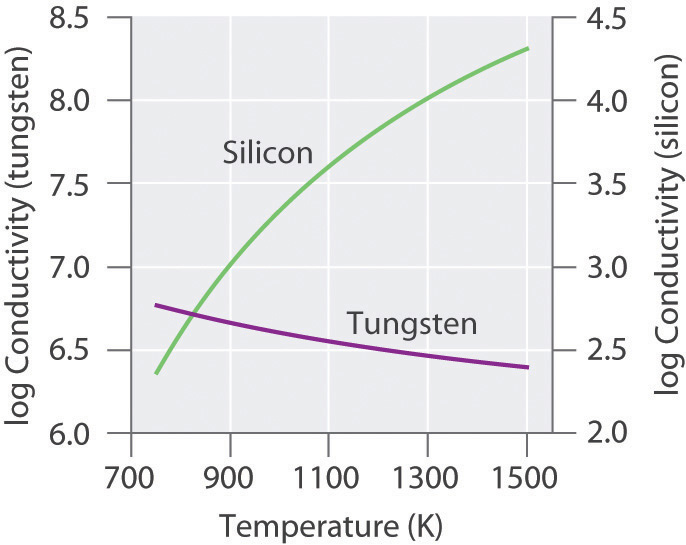 (diagram from this article)

Why is it cold on the sea floor if pressure heats things? Blue light filtering Stored energy and momentum in a magnetic field? How do stars from far away affect Earth? How can I solve this quantum mechanical "paradox"? Why are the closed and open ends of an organ pipe nodes and anti-nodes? Zeta regularization of Infinite product Why do we travel in a circle along the Earth? Why is the decay of a neutral pion $\to$ electron-positron loop suppressed? Why is Iron the most stable element? What are non-perturbative effects and how do we handle them? What is the point of complex fields in classical field theory?
Pandas how to find column contains a certain value Recommended way to install multiple Python versions on Ubuntu 20.04 Build super fast web scraper with Python x100 than BeautifulSoup How to convert a SQL query result to a Pandas DataFrame in Python How to write a Pandas DataFrame to a .csv file in Python