I am now a lot more familiar with this.

The most straightforward way to get this to work either code-first or database-first, is to change your existing database so that it has at least the minimum database schema (tables, columns and foreign keys) that is used by ASP.NET Identity Framework.

You can see the minimum schema in the image below: 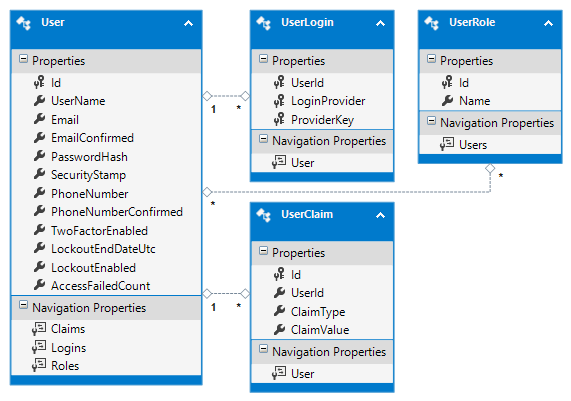 Although it doesn't have column types, it's still useful to see. You can get the precise schema from the SQL Database Project template listed on this page.

I'm sure it's possible to avoid having to make your existing database adhere to this schema by creating some kind of mappings either within your code (code-first) or using the EF tools (database-first) to map from the column name to another name within your code... but I haven't tried it.

I created most of the tables from scratch, other than the User table, where I changed my original Username column to the name UserName (case correction) to match and added the additional columns that didn't already exist.

Once you have the database in place and you know that the schema is correct, then you may want to consider using the reverse-engineer code first feature of Visual Studio to scaffold your EF classes for you. This way your new EF classes will match your table layouts precisely. Otherwise, you'll have to code all of your models yourself with all of the mappings.

Once you have the EF classes in place, you should make them inherit from different classes from Identity Framework. As you're doing this as code first, you can add the inheritance to the EF classes without any fear of them being overwritten (unlike with database first).

Notice the int specified in each, this specifies the primary key type of the User table. This is, by default, a string, but my Id value in my existing database is an int that auto-increments.

When you're using EF database-first, you don't have the luxury of adding the inheritance of the Identity Framework classes directly to the automatically generated classes. This is because they are overwritten every time you make a change to the model using the Entity Framework Visual Studio tools.

So for example, this might be the class generated by EF:

And this is the model that we can create to add our inheritance to:

So you would do this for each of the classes required by ASP.NET Identity Framework:

C# is the Main problemLeibniz golf in C#Code Injection works in C# too!Shortest Hello World program with no semi colonsUpdate .NET website without reloadingCan CLR execution continue after 'THROW' is encountered in T-SQL?Setting up a central CLR stored procedure / function respository library for internal stored procs in other databases to use?Daily database maintenance using SQL Server 2008 and a stored procedure3rd party dll in SQL Server CLRLogin to SQL Server using Windows Authentication
How to make sure quartz.properties is being used?Scikit_Learn Example: Dimensionality Reduction with Neighborhood Components Analysis exampleWhat is the purpose of .bash_logout?Can the increase in thickness of a piece of paper which can be folded infinitely surpass the speed of light?What is the difference between DLNA and UPNP?