Chemistry - How to read a chromatography calibration curve?

I assume your teacher explained the HPLC separation. If injected a mixture of four ions you will get four peaks. Each peak has an area, which is proportional to the concentration of the substance. 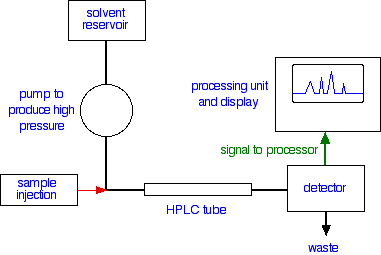 Imagine you wanted to determine the concentration of chloride ions in your tap water. What you would do is that you will prepare several known concentrations of chloride ions using $\ce{NaCl}$ solutions, say $0$ to $\pu{350 ppm}$ (look at your calibration chart). Inject them one by one, and measure the peak area, let us say the second peak is that of chloride ion. The peak shape is Gaussian in real work but you can "estimate" them as triangles. Recall triangle's area is very easy to calculate.

First step: Plot the peak area for concentration. What you get is a calibration curve.

The next step is to find a mathematical equation that fits this data.

Now you would inject your tap water in the HPLC, you do not know the concentration ($C_1$) but you do know the peak area.

The last step is called interpolation. You go from the known area, and read the corresponding concentration axis. Viola! Now you know the chloride concentration in your tap water!

Bonus: Rationalize the units of the peak area on the $y$-axis! Why it is conductivity times minutes? 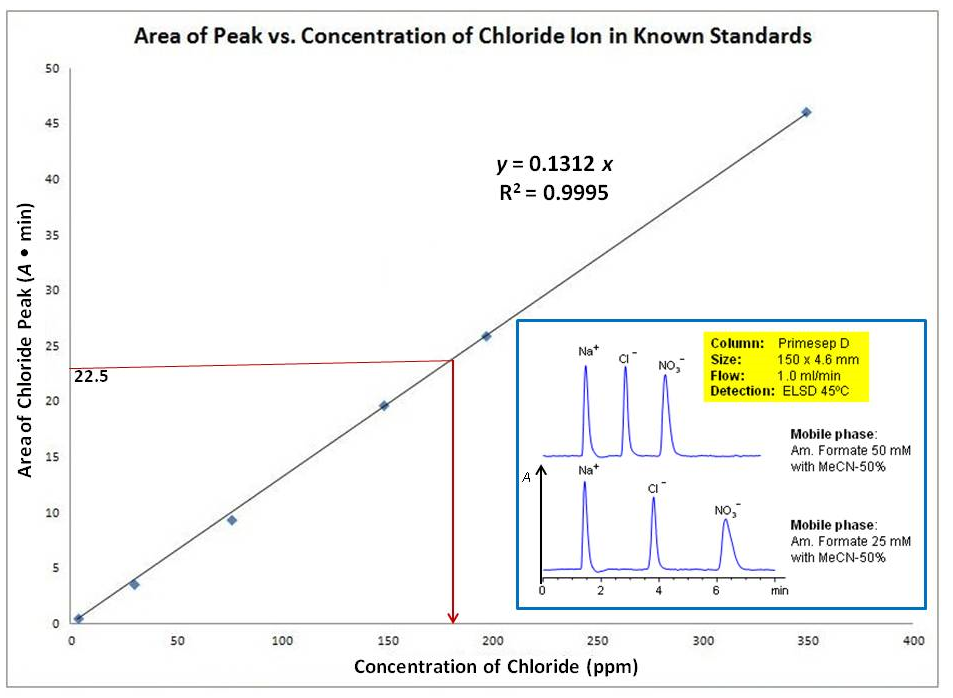 The curve is a straight line, which goes through $(0,0)$ origin ($y = 0.1312x$) with an excellent correlation with $R^2 = 0.9995$ ($R^2 = 1.0$ is the best correlation). I insert an example of chromatography trace to explain how concentration of ion is related to area under the relevant peak. When running the standard solution, you'd find the correct retention time ($t_R$) for the chloride ion. Once you prepare your calibration curve, you can run your unknown sample (suppose it contains $\ce{Cl-}$ and $\ce{NO3-}$ ions) and find the area under the chloride peak (Nowadays, all peak areas of the chromatogram are automatically given by the software). Suppose it was $\pu{22.5 Absorbance/min}$ as indicated in the image. Since the equation of the best fitted straight line is given automatically ($y = 0.1312x$), you can submit the $y$-value to it and find the $x$-value, which is the concentration in $\pu{ppm}$:

Modern technalogy made these calculations easy by giving the equation for the calibration curve and the areas under the curve. In old-fashion, for example, you have to cut each peak from each printed chromatogram, and weigh them by analytical balance to correlate them for known concentration. Further, you plot the values in a graph paper and make the best fitted straight line. Once, you got the peak area value for your unknown solution, you mark that value in $y$-axis and draw a straight line parallel line to $x$-axis until it meets the curve. From that crossing point, you again draw a straight line parallel line to $y$-axis until it meets $x$-axis (see maroon lines in the image). The point second parallel line meet $x$-axis is the chloride ion concentration in your unknown sample.

If we take 1st and last points on your graph we'd see that:

Note that 2 points usually isn't enough because you don't necessarily have a straight line. So you need more measurements to see if it's true. If it's not true - you'll have to come up with more complicated equations than $y=0.1312x$ and your results will be less precise.

Chemistry - Molecular structure of iodine nonoxide Chemistry - Étard Reaction of Ethylbenzene Chemistry - Why is 1,2,3,4,5,8-hexahydronaphthalene more stable than 1,4,4a,5,8,8a-hexahydronaphthalene? Chemistry - Reaction of glucose acetal with acetic anhydride Chemistry - How is nomenclature decided in this case (formyl vs oxy)? Chemistry - Possible structure if a compound like AB4 is polar? Chemistry - Can carbon dioxide be reduced to carbon monoxide and oxygen to produce energy? Chemistry - How explosive is benzene compared to TNT? Chemistry - Does the temperature during ice melting change? Chemistry - Are food calorie values really integers? Chemistry - Can non-deuterated solvents be used for 13C-NMR (and in fact other nuclei)? Chemistry - Are there methods for iron content determination in spinach that do not require thiocyanate?
Pandas how to find column contains a certain value Recommended way to install multiple Python versions on Ubuntu 20.04 Build super fast web scraper with Python x100 than BeautifulSoup How to convert a SQL query result to a Pandas DataFrame in Python How to write a Pandas DataFrame to a .csv file in Python