How to prevent water droplets becoming larger on the tip of a nozzle?

The problem you have is surface tension. The drop will continue to grow until the weight of the drop is large enough that the "cost" of increasing the drop's surface by A (the contact area of the drop with the orifice) is less than the gain in energy from falling.

This is described in some detail in this wikipedia entry. This describes how drop size in the pendant drop test can be used as a convenient measure of surface tension.

This means that you need to do two things to make your drops smaller:

The math is a little bit complicated, since the area of a drop that is in the process of detaching actually increases before it decreases - but the extent to which it does so definitely depends on the outer diameter of the contact surface. See this image (from http://ej.iop.org/images/1367-2630/5/1/359/Full/img9.gif):

As you can see, the area of the drop initially gets larger as it starts to fall - and it will do so when the gravitational energy associated with the lowering of the center of mass is greater than the energy involved in increasing the surface.

Incidentally you might consider adding a controlled source of vibration to your setup: if you create a small mechanical "tap", this can shake the drop loose when it reaches the required size (basically by increasing the energy associated with separating the drop from the nozzle).

UPDATE a bit of math. Clean water has a surface tension $\gamma$ of around 72 mN/m (at 25 °C) - it is a weak function of temperature. If your nozzle has (outer) diameter $d$, then the force with which it holds the water is

When this exceeds the weight of the drop, it will release. This gives us an approximate relationship between drop size and nozzle diameter: $$d = \frac{4 r^3 \rho g}{3 \gamma}$$

Plotting this for a range of values of drop diameter: 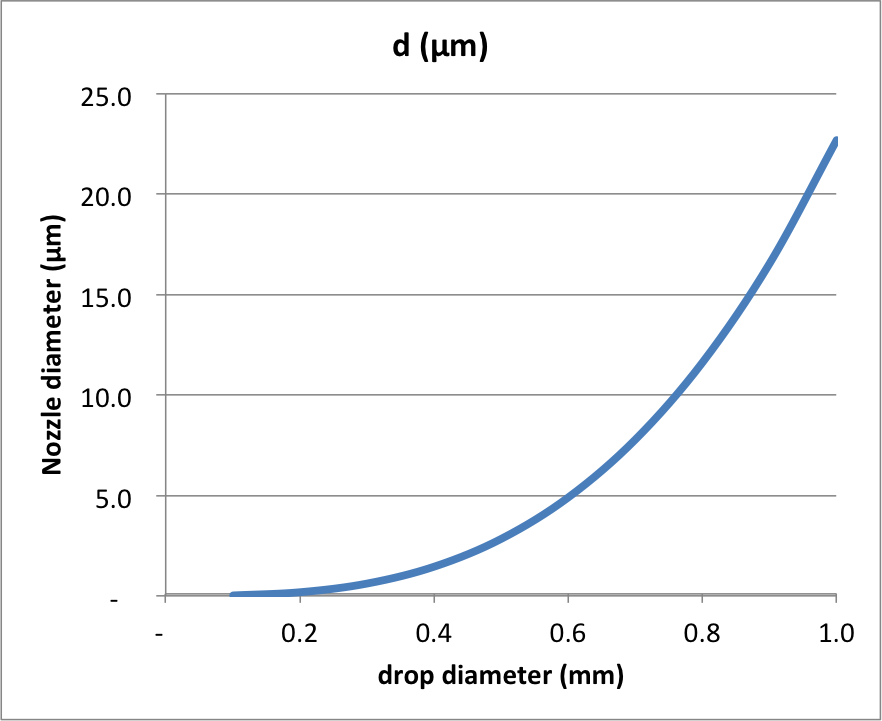 You can see that releasing a small drop under gravity alone is quite challenging - which is why piezo actuators actually give the drop a "kick", literally shooting the water out of the hole in such a way that it will remain coherent, but not relying on gravity to pull the water out.

It is clear that your nozzle with 0.2 mm diameter will never allow you to release a water drop under gravity - even if you coat the front surface with a hydrophobic coating, the area of the hole is too large. So you will have to use the piezo actuator - but note that when you set it up to produce a pulsed jet of water, this water will have quite a lot of kinetic energy and so will "shoot" out of the orifice. Basically, you need the momentum of the water to take the place of gravity - and from this I think you can estimate the velocity needed to escape.

I have never tried this calculation before... but here goes with a rough estimation.

If we assume that the escaping drop (velocity $v$) is increasing surface area at a rate $\Delta A = \pi d v \Delta t$ and force is given by $F = \pi d \gamma$ then the drop needs to have enough momentum to get away by say the radius of the nozzle before losing velocity. If we want the final drop to have a certain diameter $D$, volume $\frac16 \pi D^3$, then this represents a column of water in the nozzle of length

This column of water will experience a force of surface tension as it tries to exit the nozzle, so the work done by the jet as it escapes would be

If we say that the kinetic energy of the water in the jet has to be sufficient to overcome this, we end up with an expression that relates the velocity needed to the size of the nozzle and the diameter of the target drop, with

Dimensionally that is correct... and it makes sense that the velocity has to be higher when the diameter of the nozzle is smaller, or the surface tension is higher.

What is even more interesting is that the result does not depend on the size of the drop you want to create - although I suppose that we are assuming that the only liquid in the nozzle is the liquid we are trying to eject (there is no further momentum behind it pushing the liquid along).

Anyway - for a nozzle diameter of 0.2 mm and a surface tension of 72 mN/m, the above gives a velocity of about 50 m/s. That seems high - but then the surface tension of the water is quite high. Still... it made me want to dig a little deeper and I found a fascinating paper on the subject of inkjet physics, that included this diagram:

This states a jet velocity of 5 - 10 m/s for a much smaller nozzle: this suggests that some of my assumptions above were flawed (probably the fact that I was assuming all the energy had to be in the liquid being expelled, instead of assuming that the liquid behind it was available as a continuous force - like a plunger). However, a jet that is expelled in this way has a problem as shown in the next picture:

And that leads me back to the original question - is there some other way to get the drop to gain the energy it needs without first becoming a long thin jet (which has the risk of not becoming a single coherent drop after release)? I wonder if it could be done electrostatically...

If we could "increase gravity", then our original dropper would work just fine. Maybe an electric field could be used. If you put a charged plate with a hole close to the nozzle, then you would charge and attract the drop - and this would result in a force that can pull the water away from the nozzle. Again, the above paper gives some examples of how this is used. I don't have the time right now to do the calculation to see how feasible this is, but my hunch says that it ought to work for smaller drops.

another update - this one inspired by an old drinking game. After the bottle is empty, bet your buddies you can still get 40 drops out of it. Then cut a small wedge of paper, and put it in the mouth of the bottle. Let the bottle sit on its side for a while, then tip it. The liquid that was stuck to the walls has accumulated in the bottom, and gets turned into tiny drops by the wedge. See this film clip. Picture of the setup (yes this is a tiny vodka bottle in keeping with the inspiration...) 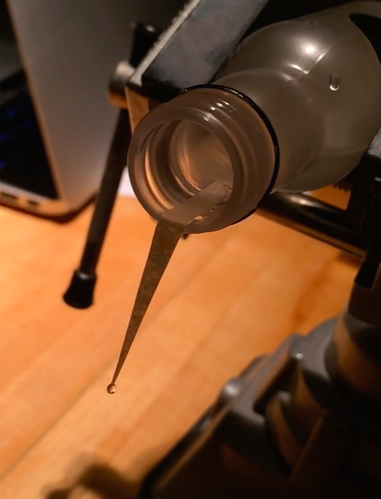 It looks like you get drops of about 1.4 mm or so with this method - sorry this was a crude late-night kitchen counter experiment. I suspect that using something other than a paper wedge may improve the experiment significantly - and if you were playing a nice loud noise on a loudspeaker, you could probably shake the drop off while it's still smaller. But the family is asleep and I'm not going to wake them up in the name of science. I think it would work though. Guitar amp, signal generator, boom. Adding a little surfactant (soap, alcohol) would probably help too.

I am not sure the drop size is defined by the inner diameter of the tube, I would suspect that if you have a tube with a smaller outer diameter, you might get smaller droplets.

You want to get the droplet to separate from the tip sooner than it otherwise would. I can think of some ways:

Recommended books for a "relativity for poets" class? How would one detect antihydrogen in the universe? How can I estimate the density of fog? Why is $\pi$ used when calculating the value of $g$ in pendulum motion? Why do vapour cones form around jet fighters? Index notation with Navier-Stokes equations Black hole "no hair" theorem If something is not moving in space, is it moving on the time axis at the speed of light? Explanation for negative specific heat capacities in stars? When a planet is heated through gravitational pull, where is the energy taken from? What is the actual energy content of the Sun? Non-integrability of the 2D double pendulum
Pandas how to find column contains a certain value Recommended way to install multiple Python versions on Ubuntu 20.04 Build super fast web scraper with Python x100 than BeautifulSoup How to convert a SQL query result to a Pandas DataFrame in Python How to write a Pandas DataFrame to a .csv file in Python