TL;DR: There is no inner- or outer coordination spheres in this complex. Both cobalt(II) and mercury(II) have nearly ideal tetrahedral coordination environment with $4$ $\ce{N}$ and $4$ $\ce{S}$ atoms, respectively, hence the proper name would be cobalt(II) mercury(II) tetrathiocyanate. Mercury(I) readily undergoes disproportionation, so assuming mercury(II) is the safest option.

Actually, denoting an inner coordination sphere is not correct for this compound. First crystal structure [1] has been assigned to cobalt(II) tetrathiocyanatomercurate(II) $\ce{Co[Hg(SCN)4]}$: 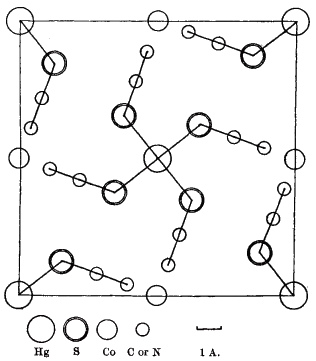 But two decades later the structure has been refined again, by the group including the author of the original publication. This time the geometry has been established more precisely (ICSD#36062), and it turned out that there is an infinite network of $\ce{Co^2+}$ and $\ce{Hg^2+}$ cations cross-linked via thiocyanate ligands, and the new suggested name was cobalt mercury thiocyanate $\ce{Co(SCN)4Hg}$ [2]: 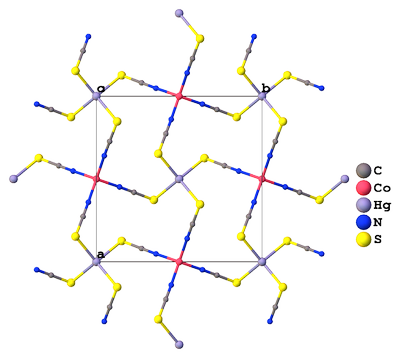 [...] Each such spiral is a spring holding the $\ce{Hg}$ and $\ce{Co}$ atoms apart and straining the bonds in the process. It is almost certainly this strain which flattens the tetrahedral coordination round $\ce{Hg}$ and $\ce{Co}$ in the $c$ direction. If the arrangement could be reproduced mechanically it would probably provide the ideal spring mattress!

There are two little clues you can use.

This obviously only helps you if the correct formula was supplied as part of the question but the second clue is independent:

Look up a table of standard electrode potentials. There are two redox reactions that can occur, they are reproduced below:

Of course, this is using aquacomplexes of both cations rather than whatever structure they would have in the complex you are supposed to name. Different chemical environments will modify a reaction’s electrode potential. However note that the uncorrected potential difference is so large – $\pu{+0.91V}$ – that it will be very hard to stabilise these otherwise incompatible oxidation states in solution.

On the other hand, a compound made up of mercury(II) and cobalt(II) is redox-stable.