Chemistry - How to calculate melting/boiling points at different pressures

I don't believe there is an equation that you can use for melting points of a general substance as a function of pressure (since the melting phase transition has a lot to do with the geometry of the molecule and the structure of the solid), but there is one for the boiling point of any pure substance when you are not near the critical point.

The liquid-vapor transition follows a very specific curve on the pressure-temperature plane of a PVT diagram. This is given by the Clausius-Clapeyron relation, which at temperatures and pressures that are not close to the critical point, can be approximated as:

This is the two-point form, which lets you predict the pressure of the vapor phase at a given temperature if you know the temperature and pressure at another point, and the enthalpy of vaporization.

You can use this to predict boiling points as a function of pressure by recognizing that:

Like I said, this only works when you aren't near the critical point, but for most applications that's not a concern.

For your specific case, especially since you are probably more interested in the liquid-solid transition at this temperature, you are better off looking at a phase diagram. 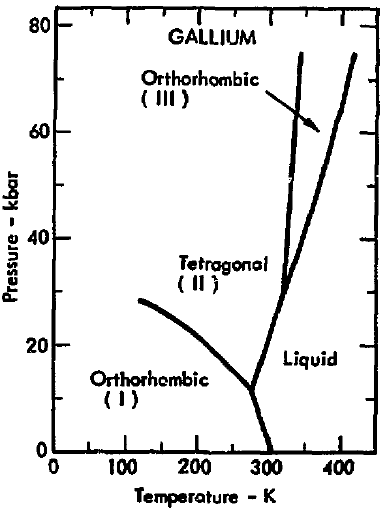 The solid-liquid line has a negative slope at low pressure (as ron pointed out) which means the melting temperature increases as pressure decreases. Depending on how high the vacuum is, and on what temperature "room temperature" is, you might be in the solid phase - but the slope is steep, so even at 0 atm the melting point is still right around 300 K.

"2.3 The temperature of the melting point equilibrium of pure gallium depends upon the ambient pressure of the surrounding environment, and varies with atmospheric pressure expressed upon the surface of the gallium column as follows:

(The negative sign of the coefficient is a result of the solidus expansion (liquidus contraction)."

Here is a link to the above formula (see page 3). Perhaps you could contact Isotech to get further clarification on their formula.