How to achieve flexible Object Composition?

This is a very hard question to usefully answer IMO, mostly because the model is vastly oversimplified.

If I made a Barbarian Warrior that fought with a massive warhammer, "slashes at the foe!" would sound like some funny understatement. Who/what is the foe? I know this is all theoretical & simplified (right?), but if we're talking about a game, then the foe needs to actually die at one point, doesn't it?

If we look at how a traditional JRPG might go about this, a Fight method would need to know the state of both the fighter and its target (let's keep the target singular for now), so for a start, it might go like this:

Basically the role of a Fight method would be to assess/implement the changes that need to happen on targetState based on a number of factors involving both fighterState and targetState. As such, a better name for it might be Attack, and we can assume that the fighterState contains information about what piece of weaponry is currently equipped and whether that weapon "slashes", "pierces", "crushes", or simply "hits" the target. Similarly, the targetState can be assumed to contain information about what pieces of armor are equipped on the target, and whether and how this equipment is able to deflect/nullify or reduce the amount of damage received. With such mechanics, we can even have a PoisonBlade slashing the target to deal what was calculated a 76 HP damage, plus a recurring 8 HP poison damage every turn unless the target consumes (or is otherwise given) an Antidote item to cure their poison state.

How we design class modules is not quite like they do in textbooks with Animal and Cat and Dog where the Dog goes "woof" and the Cat goes "meow" and all the code did was invoke Animal.Talk in both cases and poof, glittering polymorphism-through-inheritance!

What I'm getting at is, real-world code doesn't do Cat and Dog classes, not any more than a real-world JRPG game would define different types for each possible character class in the game - an Enum, maybe, and different assets and resources, definitely; adding a new character class to your game should be adding data, not code. But the game mechanics don't need to be bothered with how different a Paladdin can be to a BlackMage or a RedWizard, because the different skills and abilities of a Paladin vs those of a Fighter or a BlackBelt are where composition should come into play.

See they're not different methods, they're different objects.

A Fighter doesn't have "no concept of mana", it's a PlayableCharacter instance that might be composed of a CharacterStats object where both the MP and the MaxMP properties begin the game at 0.

So we take a step back and look at the big picture, and without writing a single line of code, we visualize how things need to coexist and what needs to be responsible for what, in order for the game to be able to make a Paladin slash at a Dragon: as we break down the required components and work out how they all relate to each others, we quickly realize that there's no need to force composition to happen anywhere, it just happens, out of necessity! 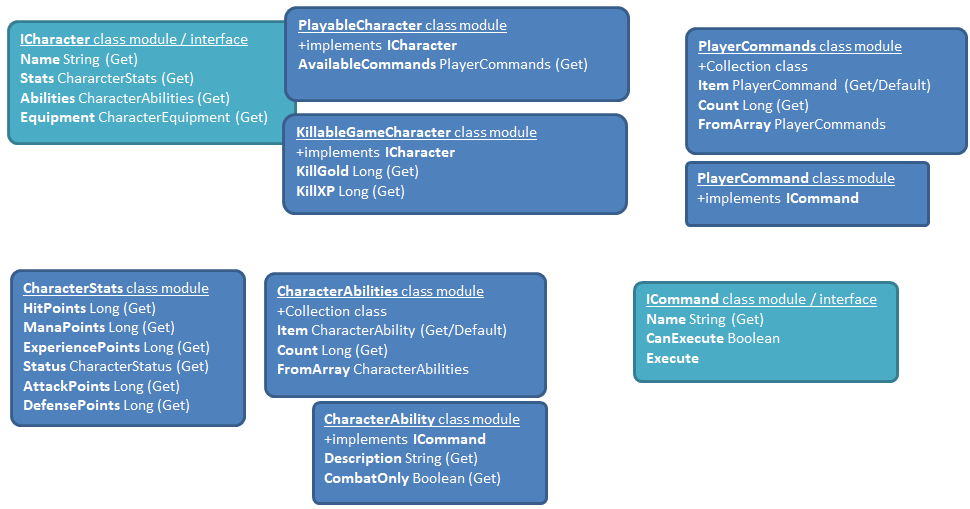 In a language that supported class inheritance, you might have CharacterAbility as the base/abstract class for things like FightAbility, CastSpellAbility, UseItemAbility, and other classes, each with wildly different implementations for their Execute method. In VBA you can't do that, so instead you might have an ICharacterAbilityCommand interface, and FightAbility, CastSpellAbility, UseItemAbility classes that implement it.

Now we can picture a CombatController class that knows everything about every actor: there's an instance of a KillableGameCharacter named Red Dragon that yields 380 XP and 1200 gold, has a BiteAbility, a ClawAbility, a WingSpikeAbility, and of course a FireBreathAbility - its CharacterStats are such that its FireBreathAbility will deal somewhere between 600 and 800 fire-elemental damage to our Paladin.

Ha! Noticed that? Just by uttering how things interact with each other, we know that ICharacterAbilityCommand.Execute needs to take the CharacterStats of the executing character in order to be able compute just how fierce that dragonfire is. That way we can later reuse the FireBreathAbility for a weaker Wyvern monster. And since we're taking in a CharacterStats object, whether they're the stats of a Paladin, the stats of a Black Mage, the stats of a Red Dragon or those of a Slime, makes no difference whatsoever.

And that sounds very much exactly like the problem you were trying to tackle in the first place - just slightly more abstracted, such that you don't write code that reads like a Dragon Warrior battle transcript ;-) 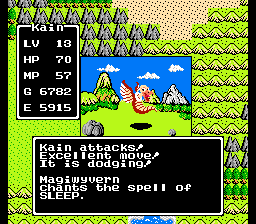 @Robert, I actually like your code. However, I'm not sure it qualifies as composition. Actually, I think you've discovered a 'mixin' pattern, sort of, (or maybe even the visitor pattern) so congratulations on that. Here is composition as I see it.

So with the default member trick, we ship a Base property that allows access to all the base's classes methods (but not private state, which is a good thing IMHO). But because writing foo.Base.Bar in code is ugly, we pull a trick to make the Base property the default member so that it can be replaced with just a pair of brackets. Thus, the composition becomes less ugly to look at and no need for a subclass to replicate all the base class's methods.

The Paladin.cls class as exported to disk and amended to pull the default member trick.

material-ui v4.0.1 warning "Expected an element that can hold a ref" .NET Core build in docker linux container fails due to SSL authentication to Nuget Use "perl6" command with Git Bash on windows How to fix a view from going off of a page when it is constrained to a card view static website hosted in s3: pages return 404 after refresh Selenium: Point towards default Chrome session Which is the difference between Long.valueOf(0) and 0L in Java? Deploy Vue.js App as Azure App Service from Visual Studio Code Enter a docker container running with Google Cloud Run VarHandle get/setOpaque unstacking shift data (start and end time) into hourly data Adding strings in lists together
Pandas how to find column contains a certain value Recommended way to install multiple Python versions on Ubuntu 20.04 Build super fast web scraper with Python x100 than BeautifulSoup How to convert a SQL query result to a Pandas DataFrame in Python How to write a Pandas DataFrame to a .csv file in Python