How does the Earth's center produce heat?

Heating because of high pressure is mostly an issue in gases, where gravitational adiabatic compression can bring up the temperature a lot (e.g. in stellar cores). It is not really the source of geothermal heat.

Earth's interior is hot because of three main contributions:

Note that we know the total heat flow rather well, about 45 TW, but the relative strengths of the primordial and radiogenic heat are not well constrained.

The energy is slowly being depleted, although at a slow rate: the thermal conductivity and size of Earth make the heat flow out rather slowly. Geothermal energy plants may cool down crustal rocks locally at a faster rate, getting less efficient over time if they take too much heat. But it has no major effect on the whole system, which is far larger.

That said, the Earth's core does produce heat. It retains a bleep ton heat (read a crude four letter word instead of "bleep") from its initial formation. This initial heat came in two forms. One was a result of collisions. Even more heat was generated when the Earth separated into a core, mantle, and crust. This is where the bleep ton comes into play. The Earth has only had 4.5 billion years to radiate away that huge amount of heat. That's too short of a period of time for that huge amount of heat.

We generally tend to underestimate sizes and masses of celestial bodies. A little giveaway is that for all non-astronomical means and purposes we consider the Earth's mass infinite without any measurable error.3

Let's make an estimation: How does the heat stored in the planet Earth relate to humanity's energy production? I'm only interested in an order of magnitude here. Let's assume that the average specific heat of the earth's matter is that of silica (SO2), ca. 0.7 J/(g*K). This leads to the following results:1

It's noteworthy though that this estimate assumes a constant energy supply for the next couple million years. That is rather unlikely since we'll be on our way to a Kardashev Type III civilization, provided we manage to survive all the bottlenecks ahead. As Ray Kurzweil remarked we tend to underestimate exponential growth because we are hardwired for linear relations. A civilization with exponentially growing resource usage (like our current one) will not be able to rely on geothermal energy for geological time frames. (It will not be able to rely on solar energy either, if we extend the time frame just a bit.) If we assume an increase of 2% per year, Wolfram Alpha plots this nice curve which shows when the supply needed in a single year would amount to the Earth's thermal energy corresponding to a 1K difference. Apparently that point would be reached in 800 years, not 7 million. Note how the curve doesn't make a dent until year 500 or so.4 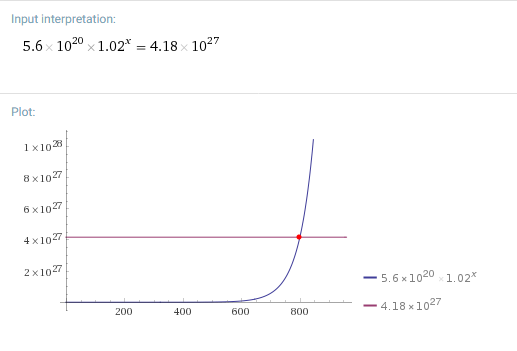 4 A similar curve (with a time interval of perhaps 150 years instead of 800) could be drawn for the consumption of mineral oil. In the mid-1800s anybody predicting that one day not too far into the future we'll worry about using up all of the easily accessible mineral oil of the Earth would have been laughed out of town.

It's entirely possible that I made a mistake and the result is off by a few decimal digits (although it's probably not too small); I appreciate corrections.

Is ideal gas incompressible? Why do we perceive time? Are quasi-particles really particles? Does the fact that we can only measure the two-way speed of light undermine the axiom of invariance? Trajectory of a satellite whose velocity is less than circular orbital velocity? How to derive equation (N.15) in Ashcroft and Mermin's Solid State Physics? Alternative classical explanation of the Stern-Gerlach Experiment? Write electromagnetic field tensor in terms of four-vector potential Why aren't satellites disintegrated even though they orbit earth within earth's Roche Limits? Why does Taylor’s series “work”? What are the forces behind the orbit of the Earth around the Sun? How large would the steam explosion at Chernobyl have been?
Pandas how to find column contains a certain value Recommended way to install multiple Python versions on Ubuntu 20.04 Build super fast web scraper with Python x100 than BeautifulSoup How to convert a SQL query result to a Pandas DataFrame in Python How to write a Pandas DataFrame to a .csv file in Python