How does magnetic field store energy?

There is a very nice detailed argument from the Maxwell equations and Lorentz force equation to show that it all works out correctly, as long as we associate the energy you quoted ($B^2 / (2 \mu_0)$ per unit volume) with the magnetic field.

My question is that if magnetic field cannot do work, then what does the energy signify?

In the diagrams the voltage source is a battery. In the top diagram the switch has been in the closed position for a long time so that all transients have disappeared. Under these conditions the ideal inductor looks like a short circuit. So the voltage across the inductor is zero and the current in the inductor is

Eventually becoming zero when all the energy that was stored in the magnetic field is dissipated as heat in $R_1$.

Here, the magnetic field does no work. It gets converted to electric field in the wire which makes the electrons move against the resistance which in turn dissipates as heat

I said the energy stored in the magnetic field does work, not that the magnetic field itself does work. The mechanical analogue is the kinetic energy stored in a moving object can do work when bringing it to a stop. Mass is the analogue of inductance. The velocity of the mass is analogous to the current in the inductor. The inertia of mass that resists a change in its velocity is analogous to the inductor resisting a change in current. 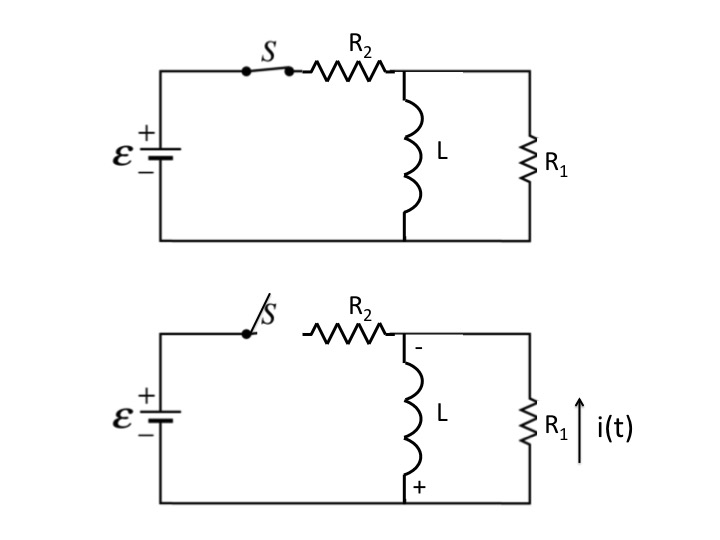 From Jackson's "Classical Electrodynamics" third edition in Chapter 5 section 16 "Energy in the Magnetic Field". He talks about how "the creation of a steady-state configuration of current involves an initial transient period during which the currents and fields are brought from zero to the final values. For such time-varying fields there are induced elecromotive forces that cause the sources of current to do work. Since the energy in the field is by definition the total work done to establish it, we must consider these contributions".

Then he goes on to derive an expression for the magnetic field energy, which is identical to yours if there is a linear relationship between $\mathbf{B}$ and $\mathbf{H}$. If you're interested you can pick up a copy, I highly recommend it if you're interested in the theoretical side of electrodynamics/physics.

How do Rindler coordinates fit into special relativity? Is Hawking radiation real for a far away observer? How is it possible for the same force to do different amounts of work in two different inertial frames? Why doesn't Gaussian wavepacket broadening in position mean there will be a shortening in momentum? Are magnetic field and electric field perpendicular is spherical waves? Do "almost black holes" exist? How do photons affect each other gravitationally? Estimating of the size of the Milky Way from the Sun's motion Charged Black Hole in 1+2 dimensions without cosmological constant Why can't an electric field line suddenly break? Will a plastic feel less heavy when I put it in a bucket of water and carry it? Renormalization and regularization operators for ultracold atoms
Pandas how to find column contains a certain value Recommended way to install multiple Python versions on Ubuntu 20.04 Build super fast web scraper with Python x100 than BeautifulSoup How to convert a SQL query result to a Pandas DataFrame in Python How to write a Pandas DataFrame to a .csv file in Python