Chemistry - How does heptafluoropropane suppress fire?

Curt F. is probably correct in his estimate that heptafluoropropane extinguishes fire primarily by physical means. According to an overview by Choy and Fong, 'An Introduction to Clean Agents: Heptafluoropropane' (Int. J. on Eng. Performance-Based Fire Codes, vol. 5, nr 4, p. 181$-$184, $2003$),

For heptafluoropropane, the contribution of physical mechanisms to the extinguishment of fires predominates over the chemical mechanism. It suppresses fires primarily by

Oxygen depletion plays an important role in reducing flame temperature. The energy absorbed in decomposing the agent by breaking fluorine bond[s] is quite important, particularly with respect to decomposition production formation.

The chemical effect does indeed involve tying up active radical species. As an example, consider the mixture $\ce{H2/O2}$. The primary active species are $\ce{OH^\bullet}$ radicals.

The chain starts to grow.

[----] the thermal decomposition of small amounts of heptafluoropropane in the flame which form fluorinated fragments such as $\ce{CF3}$ and $\ce{CF2}$. These will then consume the key combustion chain-propagating species $\ce{H}$ and $\ce{O}$, but to a lesser extent on $\ce{OH}$ radicals. The rates of chain-branching combustion reaction will decrease, the chemical flame is inhibited and the flame propagation is halted. (Choy, Fong)

Flame inhibition by sodium species is believed to be due to chemical scavenging of major radical species (e.g., $\ce{OH}$, $\ce{H}$) in the flame.

One commercial source, unlike Wikipedia, groups pentafluoroethane together with heptafluoropropane. 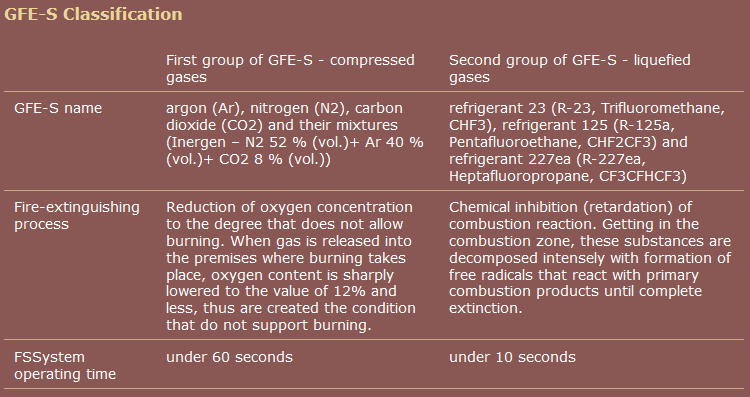 That wikipedia page on gaseous fire suppression is not very good. It is very difficult for me to believe that pentafluoroethane has a different mechanism of fire suppression than heptafluoropropane. I suspect that all the inert-gas agents work by lowering oxygen concentration, both by simple dilution and by virtue of their density selectively displacing oxygen at the bottom of a room, where fire is more likely to be (flammable materials, like all materials, are rarely stored on the ceiling).

Rooms aren't usually hermetically sealed so if you suddenly unleash a lot of gas in one, pressure won't build up very much at all. Leaks through doorways, windows, and vents will let all gas leave the room. Thus the oxygen in the room will go down as it is diluted by the new gas. If the vents are high up in the room, oxygen and other less dense gases could be selectively displaced.