Android - How do I play MP3s from my Dropbox?

Download the app called Rescan Media from the market, run it then go back to your Music player. The music that you downloaded from dropbox should now show up. There are other ways to force this media sync (unmount / remount SD should do it) but this app makes it just the press of a button.

In Dropbox, simply add MP3s to favorites and they become available in a stock Google Play Music application (Tested in Android ICS) 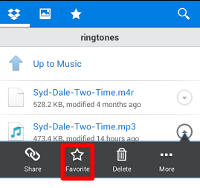 If you export the tunes to the SD card rather than the music app then they will show straight up in the music player. Just a little annoying that you've got to do them one at a time rather than as a group.

Android - How to play 5.1 audio direct to speakersAndroid - Possible to transfer songs from iTunes (on Mac) to Android phone?Android - Images have disappeared from gallery, but still in "My Files" (Samsung Galaxy S6 Edge, 5.0.2)Android - How to stream music from one android device to another?Android - What can play Ogg Opus on Android?Android - What is the Virtualizer sound effect in music players and how does it work?Android - Why can't my phone find pictures or music files suddenly?Android - Where (and how) does Android store music playlists?Android - Can I play DRM music from iTunes on my Android?Android - Music Player with a smart Shuffle option
Pandas how to find column contains a certain valueRecommended way to install multiple Python versions on Ubuntu 20.04Build super fast web scraper with Python x100 than BeautifulSoup