A wide variety of experimental conditions undoubtedly make the reaction to undergo by many different mechanisms. For example, the role of acid catalysis in the decomposition of cinnamic acid (and related compounds) has been clearly demonstrated in Ref.1. The mechanism for this acid catalyzed decarboxylation is illustrated in the following figure (see I in the diagram). The structures of some example of these susceptible substrates are also included (Ref.1) in the diagram: 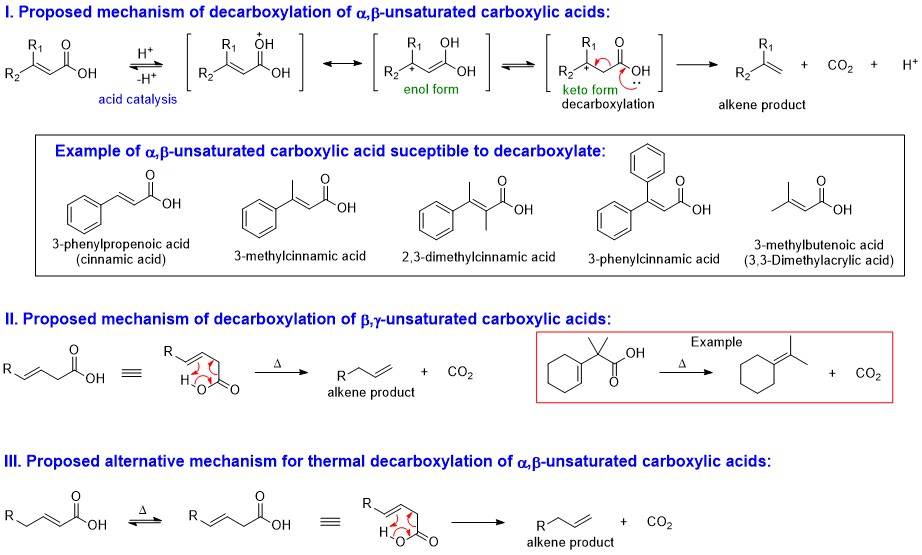 Some carboxylic acids undergo decarboxylation by pyrolysis. It is an experimental fact that the olefins resulting from pyrolysis of simple $\alpha,\beta$-unsaturated acids (note that simple means at least no substitution on $\alpha$-$\ce{C}$) are homogeneous and contain terminal unsaturation (Ref.2). Two different mechanisms leading to the same olefin are formulated in Ref.2. The first one is essentially the same mechanism suggested for the decarboxylation of cinnamic acid and related compounds (see I in the diagram). Before discuss about the second mechanism, let’s look at the proposed mechanism for $\beta,\gamma$-unsaturated carboxylic acid compounds (see II in the diagram). The decarboxylation mechanism of $\beta,\gamma$-unsaturated carboxylic acid compounds undergo the reaction through a cyclic transition complex to give alkene products. This mechanism mimics the one proposed for the thermal decomposition of $\beta$-keto acids.

As a consequence, an alternative mechanism for thermal decomposition of $\alpha,\beta$-unsaturated carboxylic acid compounds was also proposed if the substrate contains allylic $\mathrm{sp^3}$ carbon to extend the double bond (see III in the diagram). It was assumed that under thermal energy, substrate first isomerizes to the $\beta,\gamma$-isomer, which then decarboxylates through a cyclic transition complex to give the terminal alkene product as given by mechanism I.

The decarboxylation of cinnamic acid 1 and related structures has been studied by Johnson and Heinz. The reasonable mechanism below was suggested.