How can my computer use 300% PC processing power?

On OS X, like other *nixes, CPU load is measured per virtual processor core. If you have multiple - you can have 200% and more combined under full load.

This is different from Windows and maybe some other systems, where CPU load is calculated per entire CPU (or CPUs - I do not remember how it behaves when having multiple physical processors).

OS X and Linux and possibly other UNIX operating systems (or rather the most common tools on these systems) display CPU usage differently from Windows. On Windows 100% means “all CPU resources used”. On Linux, it means that one “thread” (as in Hyper-threading) is completely busy. As such, it can reach up to (Number of Threads per Core) * (Number of Cores per CPU) * (Number of CPUs) in total.

Although not entirely related, another interesting fact: Windows 10 further normalizes CPU usage using the CPU’s current throttling state. So a 2 GHz CPU running throttled at 1 GHz will only be up to 50% busy.

As already pointed out in several answers, Mac shows the CPU percentage of each process as 'percentage of one core' so you should divide that by the number of cores [including HT as 'double']

If you're uncertain as to how many virtual cores you have, Cmd ⌘ 3 will bring up Activity Monitor's CPU History pane, where you can simply count the stripes ;) 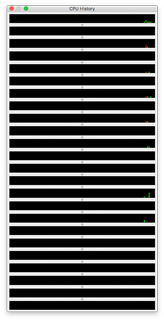 Directly below where you chopped off the image is the information you need to quickly determine actual total usage for System:, User: & Idle: Therein lies your simple total to 100%

How to install a specific package version in Alpine? How to open Firefox on a remote machine but get the display on the local machine using SSH? Which partitions should I clone when migrating Windows from HDD to SSD? How to POST file contents using cURL? It's almost impossible to avoid the overcrowded wifi channels Chrome devtool console drawer showing automatically What is Git Bash for Windows anyway? Is there a way to customise bookmark icons in Chrome? Why does Windows Search "Indexing Options" select the wrong drive if it's cloned? How does port-forwarding help in torrents? grub2-install: error: /boot/efi doesn't look like an EFI partition on a fresh Gentoo install 5400rpm HDD speeds in a USB 3.0 connectivity enclosure
Pandas how to find column contains a certain value Recommended way to install multiple Python versions on Ubuntu 20.04 Build super fast web scraper with Python x100 than BeautifulSoup How to convert a SQL query result to a Pandas DataFrame in Python How to write a Pandas DataFrame to a .csv file in Python