How can calculate the turn-off time of an LDO?

This particular voltage regulator has no active clamping function so you're looking at some function of the output capacitance input voltage waveform and regulator characteristics.

Case 1: If you actively pull the power input to the regulator down to 0V, the output capacitance will primarily discharge through the pass transistor body diode, at least down to 0.7V or so. See the block diagram below, which clearly shows a diode directly between output and input: 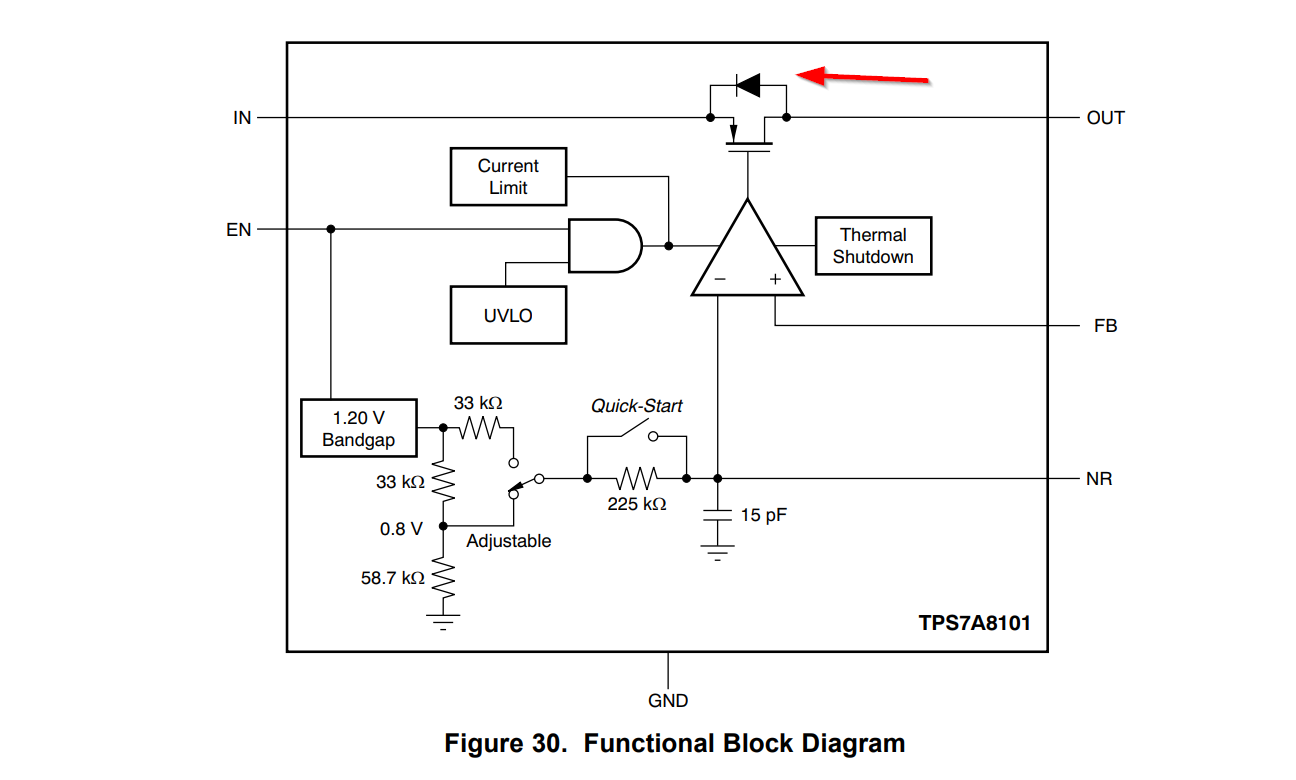 Case 3: If you disable the regulator through the enable input (with input power still applied) it will probably depend almost entirely upon the load current and output capacitance. The datasheet shows the typical output response to enable turning off, but it's with a rather low load resistance (33\$\Omega\$) so the RC time constant of the output capacitor and load is only 330usec which doesn't really show up at 50ms/div. 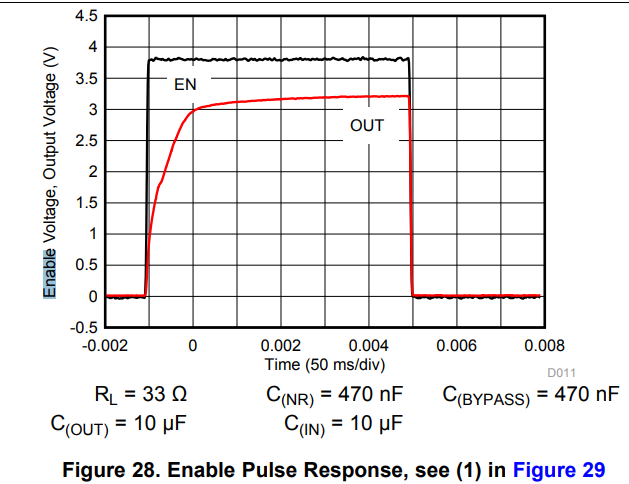 With the recommended feedback resistors and no other load, and with 10uF the time constant is more than 400ms so it could take more than 1 second to to drop down to << 1V.

If you need to have the regulator output drop down to some specific maximum voltage in a certain period of time under specific conditions, you can test a sample and add a large safety margin or buy a part that is specified for that kind of requirement.

For example, the LT3063 has an active discharge function that will take a 10uF output load capacitance down to < 10% of output voltage in 750us typical, 2ms maximum for enable controlled shutdown.

Because it is so variable it is not listed in the datasheet. This value will be very dependent on the load. This is probably not a problem that you could predict but place bounds on. The RC time constant of the load and bypass caps would be an "upper bound" on time. If your load has transistors in it, it could be a really complex problem because the amount of current/voltage can vary as the device powers off (from what I've seen anyway).

Purpose of cylindrical attachments on Power Transmission towers Why is my power MOSFET heating up when on? Trying to get (more) accurate readings from thermistor (electronics, math, and code inside) How op-amp stabilizes? Rail-to-rail op-amp only reaches 90% of VCC, works sometimes, not everytime Why do radiation hardened IC packages often have long leads? Understanding "Current Draw" in terms of "Ohm's Law" How can I get ground from a NEMA 5-15R wall socket without electricity? Why am I Seeing A Weird "Notch" on the Data Line For Some Logical 1s? Purpose for Shunt Resistor on Opto Isolator Input? Active low-pass filters --- good to what frequencies? Why is only the fundamental frequency component said to give useful power?
Pandas how to find column contains a certain value Recommended way to install multiple Python versions on Ubuntu 20.04 Build super fast web scraper with Python x100 than BeautifulSoup How to convert a SQL query result to a Pandas DataFrame in Python How to write a Pandas DataFrame to a .csv file in Python