Saying that "a physical black hole takes an infinite amount of time collapse, because time is redshifted near the Schwarzchild radius" is just a wordy way of saying that an event horizon will not exist in the causal past of any outside observer. (Which of course is a tautology that follows from the definition of an event horizon in the first place.) 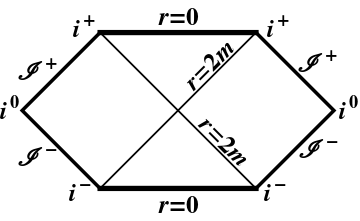 Now consider the Penrose diagram for the collapse of a (spherical) star: 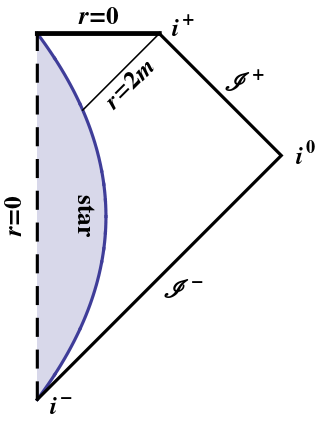 (borrowed from the same source)

This still has the same basic feature that $\mathcal{I}^+$ together with $i^+$ do not form a Cauchy surface. And the main arguments leading to the exisitence of Hawking radiation stay the same (although some of the details may vary). In particular, the results become more and more the same as one approaches $i^+$ along $\mathcal{I}^+$.

While the original derivation of the phenomenon of Hawking radiation (HR) relied on the existence of eternal future event horizon, since then it has been established that its existence is more of a mathematical convenience for the calculations rather than a strict requirement for HR.

First, let us clear a misunderstanding:

For distant observer, a physical black hole takes an infinite amount of time collapse, because time is redshifted near the Schwarzchild radius. Instead of the matter crossing the horizon, it will just pancake closer and closer to the $r_s$, without ever forming a horizon.

If we consider only classical general relativity (i.e. no quantum effects), then by the clock of a distant observer, event horizon forms in finite amount of time. In the quote above, OP is forgetting that $r_s$ is not some external constant but is instead determined by all this matter that forms the black hole. To illustrate, let us consider a particle of small mass $\delta m$ falling into an already formed black hole of mass $M$. The particle does not have to reach $r=r_{s}= 2 M $ to cross the horizon (we are using GR units). Instead it only has to reach $r= 2 (M + \delta m) = r'_{s}$ and this takes only a finite amount of time (by that same external observer's clock) on the order of $M \ln(M/\delta m)$. By that time the event horizon would expand to its new value $r_s'= 2(M + \delta m)$, enveloping the particle.

Nevertheless, the existence of bona fide event horizons is far from established if we take into account quantum corrections. Depending on how the full theory of quantum gravity works, event horizons may form very late during the collapsing objects evolution, or they may not form at all. For example, in [1] Hajicek showed, that it is possible to have an evaporating black hole spacetime with an apparent horizon but without the event horizon, and such a spacetime would still have Hawking radiation. Furthermore, in [2] it has been shown that whenever there is an apparent horizon, not necessarily of gravitational nature, and a basic quantumness of physics, then there would be Hawking radiation. So one could observe HR in various analogue black holes, where the effective metric with an apparent horizon emerges describing propagation of relevant degrees of freedom there.

But even the apparent horizon is not really necessary for HR. What is needed is the approximately exponential relationship between affine parameters of null geodesics approaching the black-hole like object from past null infinity and escaping away from it to future null infinity [3].

The following spacetime diagram of a physical “black hole-like” spacetime formed as a result of a star collapse illustrates this property: 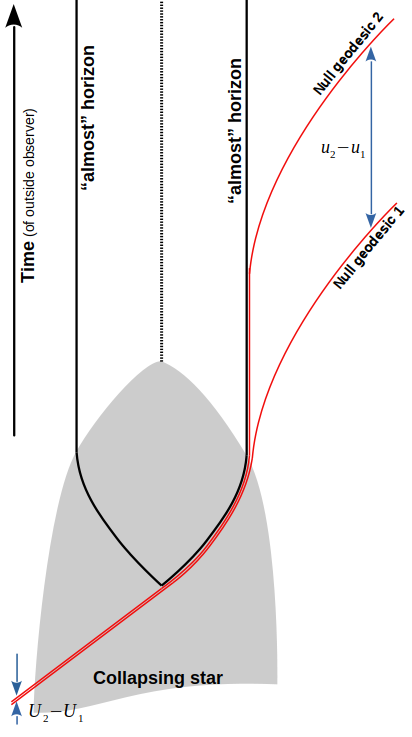 We have two null geodesics escaping to a future null infinity $\mathscr{I}^{+}$ with a separation $u_2 - u_1$ (measured by affine parameters at $\mathscr{I}^{+}$, but it is translatable to a difference in signal arrival time for a static observer far away from the black hole). Tracing these geodesics back in time, we note that they arrived from the past null infinity $\mathscr{I}^{-}$, but their separation there $U_2-U_1$ is exponentially smaller. It is this exponential scaling that is the necessary and sufficient condition for the existence of Hawking radiation, and not the global geometric properties of a spacetime (such as the existence of an event horizon). For the “usual” black hole spacetimes the approximate relationship between parameters $U$ and $u$ at $\mathscr{I}^{-}$ and $\mathscr{I}^{+}$ is: $$U≈U_H - A e^{-κ_Hu},$$ as $u\to +\infty$, with $κ_H$ being the surface gravity at the horizon, but in general (for example for evaporating black hole) instead of constant $κ_H$ there would be a function $κ(u)$. Once this exponential scaling is quantified and if a suitable adiabatic condition is fulfilled it is possible to write the coefficients of time-dependent Bogoliubov transformation with the local properties of exponential scaling relation controlling the temperature of radiation. It is expected that physical black hole spacetimes would satisfy the requirements for HR even if various quantum corrections are included.

This exponential scaling offers an interesting additional point of view on Hawking radiation and related phenomena (Unruh and Gibbons–Hawking effects): thermal radiation arises as a result of quantum vacuum fluctuations being subjected to relativistic exponential scaling transformation [4]. This point of view is suitable for treating situations without a clear geometric features such as event (or apparent) horizon.

Why can we distinguish different pitches in a chord but not different hues of light? Operational definition of rotation of particle Does a rock use up energy to maintain its shape? Understanding voltage and power in the fluid analogy for DC circuits In the double-slit experiment, why is it never shown that particles may hit the space between or outside the slits? If an object would be too tough to puncture while static, is it possible to pierce it while holding still and having it move toward you? Matrix elements of the free particle Hamiltonian Why do we nondimensionalize the Schrödinger equation when solving the quantum harmonic oscillator? Weyl anomaly in 2d CFT (string theory lectures by D.Tong) Why do water drops form spheres in space? What's the reason behind the current remaining the same after passing by a resistance? Does any basis belong to a set of eigenfunctions of some observable?
Pandas how to find column contains a certain value Recommended way to install multiple Python versions on Ubuntu 20.04 Build super fast web scraper with Python x100 than BeautifulSoup How to convert a SQL query result to a Pandas DataFrame in Python How to write a Pandas DataFrame to a .csv file in Python