Provided you didn't reformat the new card and/or write anything else on it, there's a good chance you could restore some of the deleted contents with tools like undelete or unformat (some such tools are freely available, just Google for them). I've done it before and is quite possible, that is of course, assuming the card in question was actually used before, and is not new and never written on.

Restored files would probably be missing parts, or at the very least their names would be all wrong (FAT removes the first letter of the filename on delete), but you could perhaps be able to inspect EXIF data on any such restored files (JPeG files), or load RAW files in a compatible reader, and see the camera make from there. Another possibility is also to check for any XML files in the directory structure (usually in a folder named DCIM_XXX where XXX is some incremental number), as some camera manufacturers include thumbnail information in them (e.g. Panasonic does, possibly others too). Often (it is so on my camera), these XML files would contain camera model information. If you have problems finding good tools to read such metadata in, you could also load them in freeware software like Notepad++ and inspect for any identifying file header information (such metadata are normally in the first parts of files).

But whatever you do, don't write on the card (unless you're trying to restore previous files with undelete, or unformat it), and move the read only slider on the side of the card to locked position before putting it in other camera models, as a precaution.

The read-only lock on this photo is the orange part on the side, push the slider down (photo shows it in write enabled mode) to make it read only: 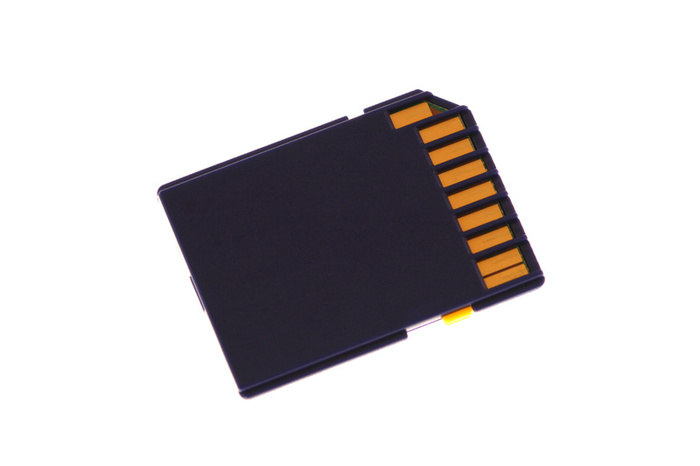 Alternatively, some partition restoration tools (mostly more advanced and as such paid ones though) are also capable of reading your card's raw data, and creating disk's mirror copy that you could upload to your forensically better versed friends to play with, and see if they're able to come up with something. Assuming the raw data stream is not filled with data, such disk's mirror image should compress pretty well with file compression tools, and you might end up with a few MB worth of data to upload - quite reasonable to expect that shouldn't be a problem then. ;)

No, this is most likely not possible unless the camera leaves some sort of metadata on the SD card, which is highly doubtful.

Detecting skimmers and other ATM traps How to avoid scripts with hardcoded password? Touch Screen Password Guessing by Fingerprint Trace Vim Modeline Vulnerabilities Source where you can find if a CVE has a patch or not CSRF protection with Session Id Obfuscating JavaScript code Are password-protected ZIP files secure? Homomorphic encryption used for e-voting? Why is WPA Enterprise more secure than WPA2? How can I block an IP, if I'm getting many http requests in a second? XSS: Parsing Javascript
Pandas how to find column contains a certain value Recommended way to install multiple Python versions on Ubuntu 20.04 Build super fast web scraper with Python x100 than BeautifulSoup How to convert a SQL query result to a Pandas DataFrame in Python How to write a Pandas DataFrame to a .csv file in Python