I guess it is the centre of triangle excircle with largest radius, that touches no more than 3 points. In the picture below first 11 such centeres shown. They are labelled by their ranking number. 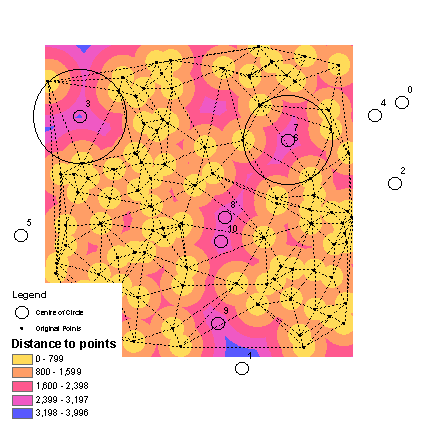 It is enough to weed out ones that are outside triangles and define the champion, i.e. No3 in the picture. 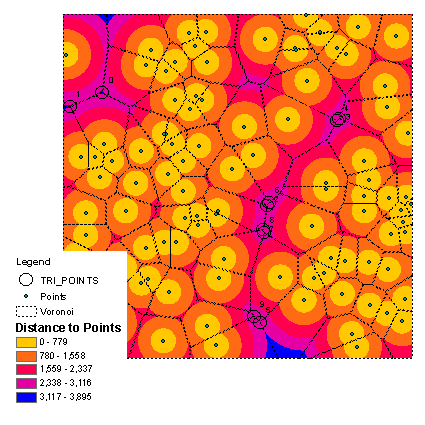 Result above unlike first solution obtained in ArcGIS without scripting (but with advanced license) and it works! However it can produce questionable results on the edges of a study area, e.g. point No 1, i.e. second remotest point found...

Here's a follow-up. Thanks to @FelixIP for pointing me in the right direction!

Using the OSM data from Australia, I was able to find the "point of inaccessibility" on the Australian Mainland - I make it around 260km equidistant from Akarnenehe, Bedourie, and Mount Dare, at POINT(137.234888 -24.966466) 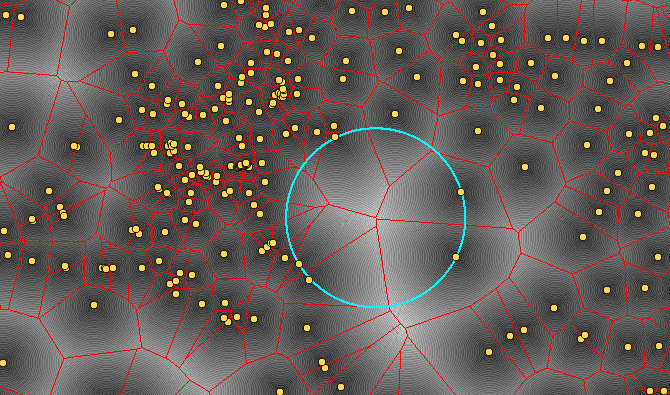 I found a fairly easy workflow in QGIS which uses a combination of the raster and vector approaches. I'm sure a similar approach would work in other GISes.

The 'a-ha' moment came from noticing this

The maxima all fall on tri-points on the voronoi mesh - points where adjacent triplets of voronoi polygons meet.

The approach was as follows :-

Then use Db Manager and Virtual Layers to find the node with the largest distance value on the raster.

How to get all attributes from overlapping polygons with identical geometry into one single polygon in QGIS Serving png image tiles using geoserver Fiona throws no dataset found when attempting to read a KMZ file Create Layer from Selected Features tool: How is the list of features stored? WKT for EPSG:4326 with LON 0 to +360 instead of -180 to +180 Save to GitHub from QGIS Get Earth Engine Object Type Cutting Polygons in QGIS at a specific distance from a feature in another layer Extract highest point in raster and convert to point vector Move legend if it overlaps features within dataframe using ArcPy What's the batched Refactor Fields tool "field mapping" syntax in QGIS? Simple way to collect the Sentinel data of a given ROI?
Pandas how to find column contains a certain value Recommended way to install multiple Python versions on Ubuntu 20.04 Build super fast web scraper with Python x100 than BeautifulSoup How to convert a SQL query result to a Pandas DataFrame in Python How to write a Pandas DataFrame to a .csv file in Python