Extract highest point in raster and convert to point vector

You can use saga - raster values to points. Then use "join attributes by location" to join the points to the polygon layer. You can then select the max value from the attribute table of the joined points/polygon layer using "statistics by categories"

This is basically the same as the one provided by @firefly-orange already.

Original question was certainly using QGIS 2.x so many algorithms have been added since. I don't know if this method could be used pre QGIS 3.x but it's certainly relevant now anyway.

I needed to do something similar where I wanted to locate more precise high points with the help of lidar data. My original high points were contained in a point layer that was based off much less precise raster data so what I turned out doing achieves what you were trying to do yourself.

There was no practical way to do it generating one point for each pixel as the spatial resolution of 1m would have been way too heavy to deal with. An alternate method to the other two answers is to isolate the pixel with highest value, turn everything else into NODATA, and only then generate points from the raster. The null ones are ignored.

I built a model (in QGIS 3.4) where I could iterate over my point layer but it could be done with a polygon layer too. Here's the sequence (if you take a look at the model below, you'd start from the Bounding boxes tool which you can replace with your polygon layer):

From this moment the output should be vector points at maximum pixel value from the original raster contained in your polygons. There are a few unneeded steps for you as I created a buffer around my original points to get polygons in which to find maximum values, and at the end I joined attributes from my bounding boxes so my output points would have the same attributes as my input points.

Of course, for this to work you have to click the button to iterate over your polygon layer, just like I had to iterate over my points. You'll have as many points layers as you had input polygons, but they can easily be merged into one layer afterwards. 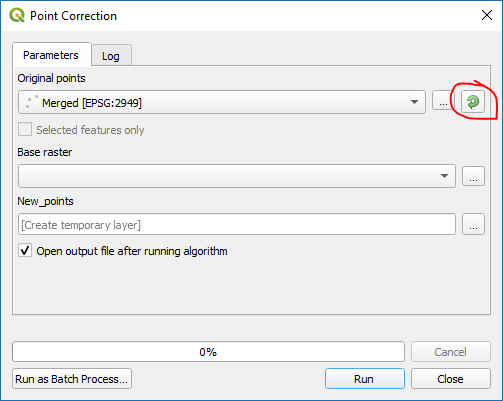 Move legend if it overlaps features within dataframe using ArcPy What's the batched Refactor Fields tool "field mapping" syntax in QGIS? Simple way to collect the Sentinel data of a given ROI? Merging close lines using v.clean How to stack bands in Google Earth Engine? Why QGis cannot display a PostGIS raster column? ogr2ogr error importing shapefile into PostGIS : "numeric field overflow" Correcting monotonicity errors using ArcGIS Desktop How Does QGIS Read 'nodata' in 3 Band Raster Data? Deleting selected features from Vector/OGR in GDAL/Python? How to fix "Hole lies outside shell" How to close all tooltips defined against the map object?
Pandas how to find column contains a certain value Recommended way to install multiple Python versions on Ubuntu 20.04 Build super fast web scraper with Python x100 than BeautifulSoup How to convert a SQL query result to a Pandas DataFrame in Python How to write a Pandas DataFrame to a .csv file in Python