According to quantum electrodynamics (QED), light can be thought of as going along all paths. However, the only paths that do not experience destructive interference are those in the neighbourhood of paths with stationary (e.g., minimal) action (time), which, in your case, is the "equal angles" path.

I strongly recommend reading Feynman's QED: The Strange Theory of Light and Matter. In the link you'll also find a link to video.

So, with QED in hand, anthropomorphically, photons don't need to know where to go, because they go everywhere. :)

When light incides on a perfectly reflective material, each atom in the mirror will absorb and re-emit photons, but since the atom is a point particle it will re-emit in all directions, as a coherent point source. The law of equal angles in specular reflection is a consequence of the fact that the phase of the re-emitted radiation is tightly bound to the local phase of the incoming beam. The angle of incidence determines the spatial variation of this phase, and thus of the relative phases of each spherical source, which in turn determine the direction in which they will interfere constructively. 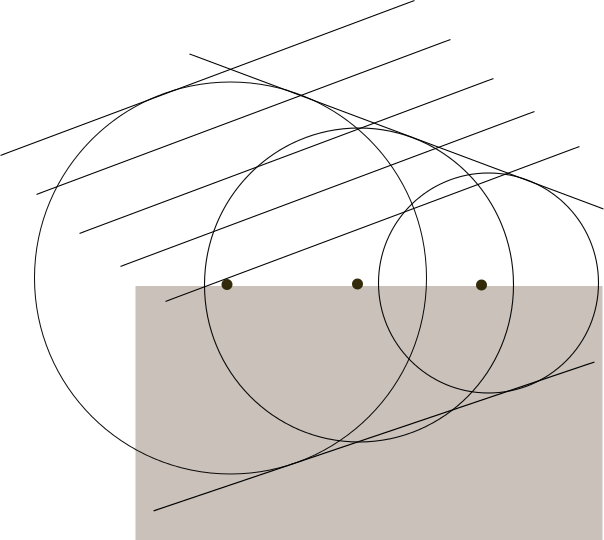 Essentially, the atoms act like a phased array such as the one in this applet; adding more sources improves the outgoing beam collimation. This produces two beams, one of which is reflected and another which interferes destructively with the incoming wave.

Recently I wrote a blog post on the topic, that how mirrors reflect in the atomic level - based on this post. Most of your question has already been addressed by the Physics.SE post I linked. Anyways, here goes...

In classical electrodynamics, the phenomena can be explained when light is thought to be made of oscillating electric fields. Light goes in, oscillates the atomic dipoles (polarization) in the glass (being insulator, it has dipoles) which in turn causes the dipoles to emit an electromagnetic radiation which has experienced of same frequency but with some phase shift ($\pi/2$) relative to that of incoming wave, that causes it to lag behind. It has to be noted that the electromagnetic waves are emitted by the dipoles everywhere (not only along the direction of incoming wave). It's just that the other paths taken by light interfere destructively and cancel out one another. The forward radiation goes along with the wave and the stuff that's reflected backward is what you see as the 4% reflected light (from glass).

When the wave hits the metal-glass interface (remember, reflection happens whenever there's a refractive index mismatch), the atoms are shaken back & forth. But, this time the electromagnetic wave is shifted to a phase of $\pi$ (due to the conductivity of metals) which causes the forward radiation to interfere destructively and hence, light doesn't pass through metals. Now, the backward radiation passes through glass, gets a few partner waves and that's how you see your face in the mirror.

Now, all that I've explained so far may be intuitive and also, may satisfy you, because it's classical view, which is conceivable. Bad luck..!!! That doesn't explain everything. You can't speak about the path of a single photon or what a single electron does in an atom. It's a mix-up, a superposition of all probabilities. All you can play with, are the chances that, how the stuff is likely to get reflected, etc. Moreover, as @Igor says, it's a collective phenomena. A photon can do whatever it wants to. It can interact with all the atoms at once, anything. So, @aufkag is totally right. And, this is what happens. Light takes the shortest path (path with minimal time) to reach the detector. In 2D euclidean plane, that geodesic is a straight line.

You may ask a question, "why doesn't the frequency change?" The discrete energy packets of light (photons), are either absorbed as a whole, or just transmitted undisturbed. Only the intensity is affected. If it were otherwise (if the frequency did change), when you do experiments in glass, you could easily notice that the color of light should've changed (blue will become red and finally disappear from our sight, as it goes into IR and radio region). But, that doesn't happen. 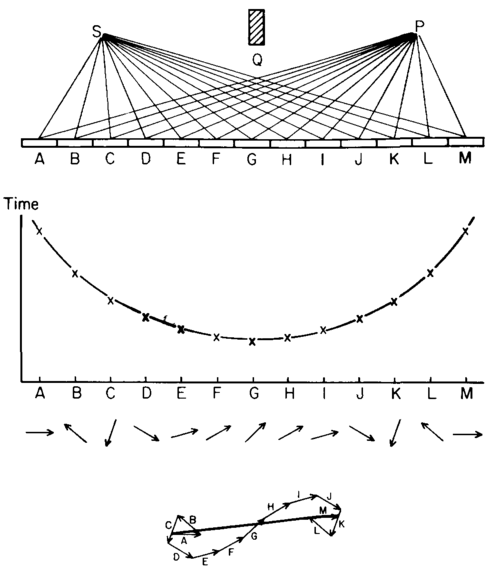 The sum of paths contributed by all those arrows (which are constructed by the time taken) constitute to produce the path taken by light. I don't like to brief it here. But, I highly recommend watching Feynman's QED lectures (especially the second video, where he explains about the Fits of reflection).

Proving that the hermitian conjugate of the product of two operators is the product of the two hermitian congugate operators in opposite order Neutrons reflective materials in nuclear reactors Torque direction meaning Does space expansion imply light will *never* reach objects currently distant enough? Lorentz transformation of the Spinor Field Does someone falling into a black hole see the end of the universe? Why are Only Real Things Measurable? Ways of achieving parallel rays of light? Why does the voltage increase when capacitor plates are separated? How did Newton discover his third law of motion? Deriving an equation involving Killing vectors Amateur moon laser ranging
Pandas how to find column contains a certain value Recommended way to install multiple Python versions on Ubuntu 20.04 Build super fast web scraper with Python x100 than BeautifulSoup How to convert a SQL query result to a Pandas DataFrame in Python How to write a Pandas DataFrame to a .csv file in Python