Chemistry - Effect of impurities on enthalpy of fusion of ice

According to the article An Empirical Correlation between the Enthalpy of Solution of Aqueous Salts and Their Ability to Form Hydrates (Pandelov et al. 2010), your observation of a lower enthalpy is correct:

However, the drop in enthalpy you observed of 25%+ seems excessive, as can be seen in the graph below:

Image source: Colligative properties of water cited from the original article Formulation of the latent heat of fusion of ice in aqueous solution (Kumano et al. 2009)

KUmano et al. 2009's methodology centred around the use of

Differential scanning calorimetry analysis was performed and the measurements and calculated values compared with respect to the specific enthalpy of the ice/solution mixture.

As for the 'mushy ice' that you observed, it is likely to be a mixture of ice and brine, as per the diagram below: 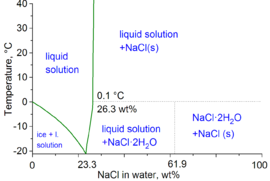