Chemistry - Do non-English speaking countries use the same element symbols? 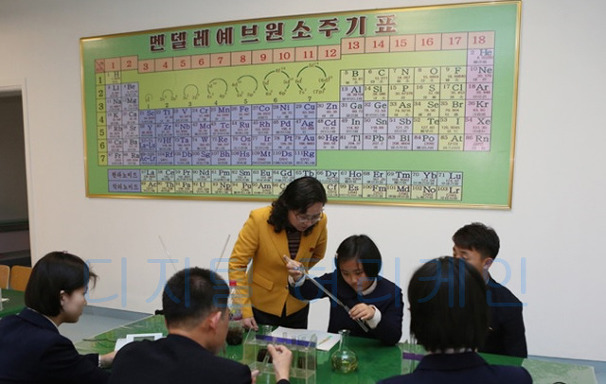 The title translates to "Mendeleev's atomic periodic table." The names of the elements are different for some.

But some are the same.

I haven't taken classes in North Korea or visited any research facilities. But it is likely that they have further modified the names to be "less western".

All of these are names, and do not replace the symbols used in the periodic table.

The International Union of Pure and Applied Chemistry (IUPAC) is the body that standardises these symbols, along with names and symbols for new elements.

IUPAC is affiliated with 60 different national chemistry organisations, including the National Committee of Russian Chemists, the Chinese Chemical Society, and the Science Council of Japan.

Historical precedent combined with the fact that (as far as I'm aware) the vast majority of scientific literature is published in English are obviously large factors here, but there's no massive incentive for any given scientific user to rock the boat on this, and there's a disincentive to training scientists in a system which would leave them unable to easily read scientific literature (even if you're an isolationist liebox like North Korea).

On a side note, Japan in particular recently gained the distinction of having an element synthesised there named after it (Nihonium), and while I'm not an active follower of nucleosynthetic proceedings, it wouldn't surprise me particularly if we saw a Chinese-named element some time in the next decade.