Here we show that instrumental advances in Raman optical activity, combined with quantum chemical computations, make it possible to determine the absolute configuration of (R)-[$\ce{^2H1}$, $\ce{^2H2}$, $\ce{^2H3}$]-neopentane. This saturated hydrocarbon represents the archetype of all molecules that are chiral as a result of a dissymmetric mass distribution. It is chemically inert and cannot be derivatized to yield molecules that would reveal the absolute configuration of the parent compound. Diastereomeric interactions with other molecules, optical rotation, and electronic circular dichroism are, in contrast to the well-known case of bromochlorofluoromethane, not expected to be measurable. Vibronic effects in the vacuum ultraviolet circular dichroism might reveal that the molecule is chiral, but the presence of nine rotamers would make it extremely difficult to interpret the spectra, because the spatial arrangement of the rotamers’ nuclei resembles that of enantiomers. The unequivocal spectroscopic determination of the absolute configuration of (R)-[$\ce{^2H1}$, $\ce{^2H2}$, $\ce{^2H3}$]-neopentane therefore presented a major challenge, one that was at the very limit of what is possible.

Reading between the lines: 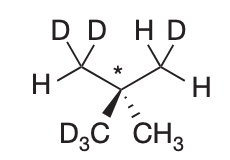 Optical rotation (OR) emerges from a difference in the index of refraction of a compound towards left/right circularly polarized light. All chiral have some difference in these indices of refraction. Your question specifically relates to isotopically chiral molecules where the effect is more subtle.

You are correct that (OR) is fundamentally an electronic effect and that isotopic substitution shouldn't directly affect that. However, vibrations can cause the molecule to oscillate around the the equilibrium structure to geometries that have a different OR and isotopic substitution alters the potential energy surface. The transient chirality of the molecule from its zero point vibrations is enough to produce OR. The effect of these vibrations can actually be fairly significant, accounting for as much as 20-30% of the observed optical rotation.

For isotopically chiral molecules, the effect is small, but can still be measured. As an example, 2-deuteriocyclohexanone has an optical rotation of $2.5^\circ$ and a number of other substituted cycloalkanones have been synthesized since.

Chemistry - Why isn't ΔH = TΔS in ΔG = ΔH - TΔS? Chemistry - Where do the percents in empirical formula questions come from? Chemistry - What is the difference between quantities reported as optical rotation and circular birefringence? Chemistry - Kinetic Energy Evaluation Integral Evaluation Program Ostlund Chemistry - What does it mean to 'fuse' ores and why do we use alkali metals in the process? Chemistry - How does the rate constant change with the change of the temperature? Chemistry - Why does N(OH)3 not exist? Chemistry - General justification for steady state approximation Chemistry - Water becomes cold on mixing energy drink Chemistry - Importance of zinc blende and wurzite crystal structures for semiconductors? Chemistry - According to KMT, is the velocity of an ideal gas always sqrt(3RT/M)? Chemistry - False positive in lucas test for primary alcohol due to formation of tertiary carbocation by rearrangement?
Pandas how to find column contains a certain value Recommended way to install multiple Python versions on Ubuntu 20.04 Build super fast web scraper with Python x100 than BeautifulSoup How to convert a SQL query result to a Pandas DataFrame in Python How to write a Pandas DataFrame to a .csv file in Python