Apple - Do iPhones have a built-in mouse or trackpad and how do I use it?

As of iOS 13 and above the process for using this feature has changed.

The steps are largely the same as for iOS 12 and earlier (see below), but instead of pressing hard on any of the keys on your keyboard, you need to press on the space bar and not let go to see and use the trackpad.

The other change is that this feature is now available to any iPhone compatible with iOS 13 or later, not just iPhones with 3D Touch. So, models like the iPhone SE are now covered!

Yes, this is true but not for all iPhones. It has to be an iPhone 6S or above (basically any iPhone with 3D Touch, which unfortunately means the current iPhone SE is not included).

The way to access it is via the keyboard, so you need to already have the keyboard visible on the screen.

Since you’re stuck having to edit a Word doc on your iPhone, you’ll probably need to know how to highlight text while using the above feature. This is a little tricky, but you just move the cursor to a word you want to highlight and then reduce the pressure on your finger ever so slightly for a moment and then press hard again. This should highlight the word for you.

Note:- This may take a little while to get used to and, while handy, certainly doesn’t make the job of editing a Word document on your iPhone easy! But it is handy for small notes or adding comments to news stories, etc.

Below are two screenshots showing a before and after shot of how this works when using this mode to edit this very answer! 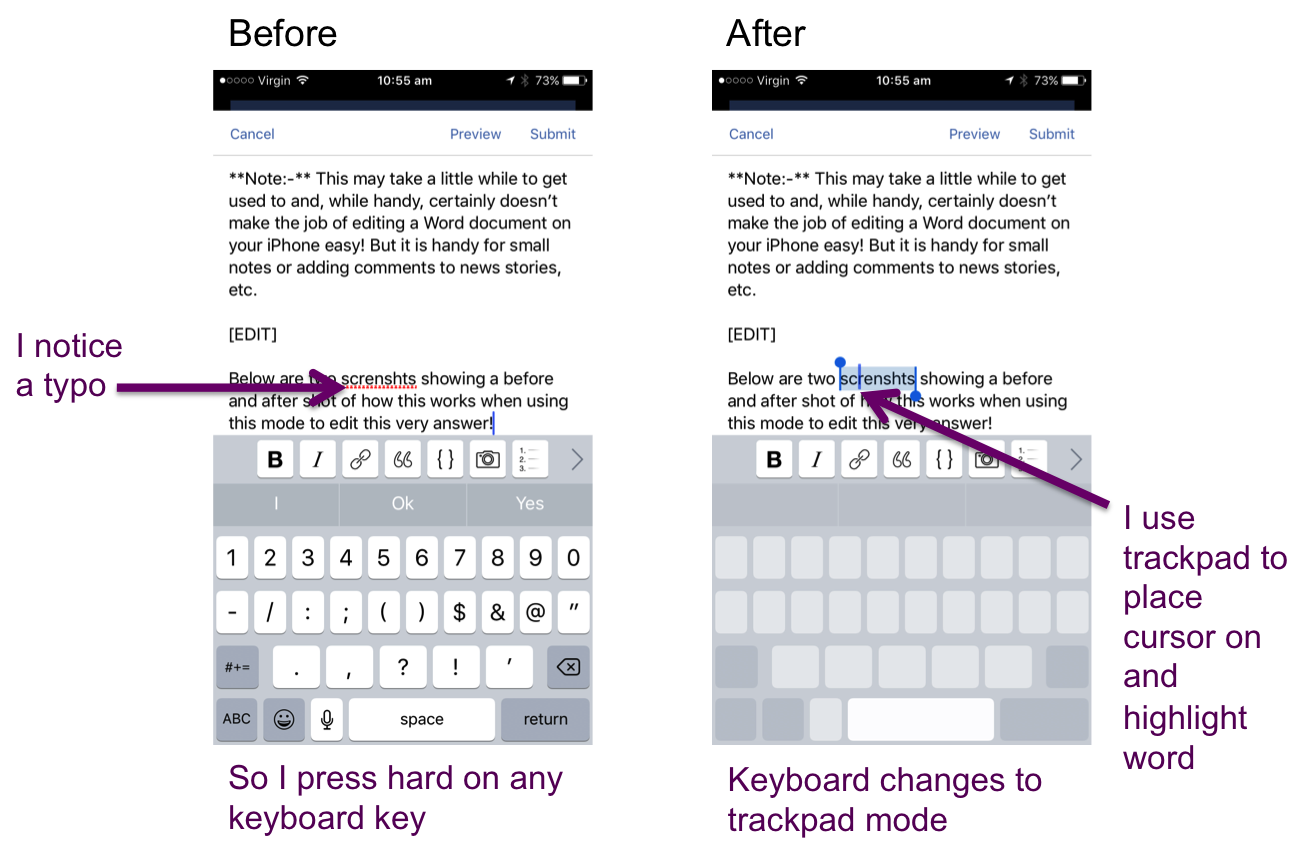 This is also possible on an iPad, even one without force touch. When the keyboard is up, simply do the following on the keyboard (all of these require two fingers):

When something is highlighted:

Apple - MacBook Pro black screens and shuts off after a few minutes' use Apple - Can a low-wattage adapter fully recharge the battery of a turned off MacBook? Apple - What privacy setting must be enabled to use Night Shift's Sunset to Sunrise option? Apple - Open a large XML file Apple - Deleting files for freeing the disk space Apple - How to know whether Mac has SSD or HDD installed Apple - How do I hyperlink 'text' within a note in the macOS Notes app? Apple - How can I find out which Mac apps are 32-bit? Apple - Blank Notification Banner Stuck in macOS Sierra Apple - Mac running slow and some applications don't open in standard mode, but in safe mode it works well Apple - Why can't I access all commands in recovery mode? Apple - IOS: How to “unsnap” a slide over app
Pandas how to find column contains a certain value Recommended way to install multiple Python versions on Ubuntu 20.04 Build super fast web scraper with Python x100 than BeautifulSoup How to convert a SQL query result to a Pandas DataFrame in Python How to write a Pandas DataFrame to a .csv file in Python