Chemistry - Difference between backbonding and hyperconjugation and conjugation

OK, let's step through these terms and let's add "cross-conjugation" and "homoconjugation" for good measure to round out the series. 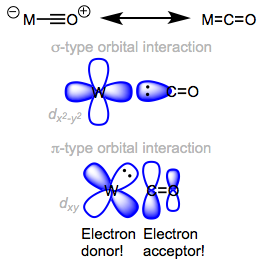 It happens most often when 1) the metal is electron rich, 2) the ligand has low-lying $\pi^{\ast}$ orbitals and 3) the metal has available a $\mathrm{d}$ orbital with the proper symmetry to overlap constructively with the carbon monoxide $\pi^{\ast}$ orbital. Here is a link to a great, one page article on backbonding if you'd like to read more.

This term is most commonly used in discussions about resonance. Hyperconjugation is a stabilizing interaction that results from the interaction of the electrons in a $\sigma$-bond (usually $\ce{C-H}$ or $\ce{C-C}$) with an adjacent (empty or filled) $\mathrm{p}$-orbital. This interaction creates an extended molecular orbital that increases the stability of the system. Most typically it involves the breaking of a carbon-hydrogen bond and then using what were the $\ce{C-H}$ bonding electrons to stabilize an adjacent charge. In resonance structures, we can't move nuclei, but we can move electrons. For example, below is a diagram showing resonance structures that involve hyperconjugation that serve to stabilize the n-propyl carbocation. Hyperconjugation has been used as part of the explanation for the carbocation order of stability being tertiary > secondary > primary.

This term is used to describe a system of continuous, overlapping p-orbitals where electron delocalization can occur. Examples of conjugated systems include the 1,3-butadiene, acrolein, benzene, beta-carotene, etc.

Sometimes you'll hear the term "cross-conjugation" used. In this case, the continuity of the overlap between the p-orbitals does not follow a simple linear pattern as seen in the examples of conjugation pictured above. Benzophenone and 3-methylene-1,4-pentadiene are examples of molecules with cross-conjugation. 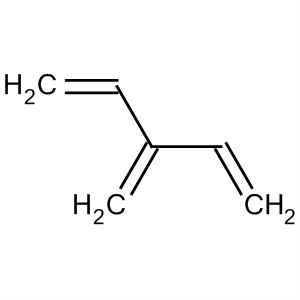 Sometimes $\mathrm{p}$-orbitals that are not directly conjugated (e.g., that are not directly connected, there is a "spacer" in between them) can still interact or overlap in a "through space" fashion. The solvolysis of the exo- and endo-norbornenyl chlorides shown below provides a striking example. The exo-isomer generates the corresponding carbocation thousands of times faster than its endo-isomer. This difference is attributed to homoconjugation. The $\mathrm{p}$-orbitals on the remote norbornenyl double bond can interact through-space with the developing $\mathrm{p}$-orbital that is being formed on the carbon where the exo-chloride is leaving from, dramatically stabilizing the formation of the resultant carbocation. This interaction is geometrically impossible for the endo-isomer. Again note, there is no direct conjugation between the remote double bond and the carbon atom where the carbocation will form, it is entirely a through space interaction that generates a pseudo-allyl system. 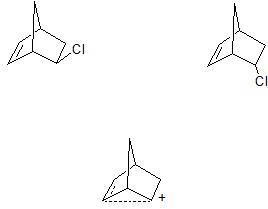 The most basic difference lies in the kind of orbitals involved in all. In hyperconjugation, there occurs an interaction between sigma orbitals on one side and completely or partially filled orbitals on the other.

In conjugation, alternating single and double bonds are present so as to create a region of overlapping $\mathrm{p}$ orbitals having in between them bridges of sigma bonds. Electrons are said to be delocalised.

Backbonding can be best described as $\pi$-coordinate bond, wherein the excess negative charge is donated to the central atom having vacant orbitals (e.g., $\ce{BF3}$).