Chemistry - Conception and manufacture of the Avogadro Project's (nearly) perfect silicon sphere (and, what is “atomic feeling”?)

Short answer: The success of the project benefitted from many contributors.

According to BIPM and its Avogadro project, there are two spheres (reference). The page equally refers to a publiction about the 2011 $\ce{^{28}Si}$ atom count (paywall) and the report in 2017 (here, open access). From the later paper, you may identify the origin of the two spheres in the Czochralski crystal obtained initially: 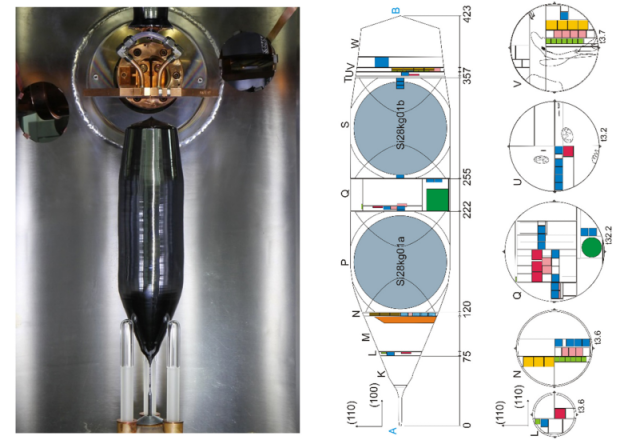 as well as where samples were taken to determine the amount of carbon, oxygen, nitrogen, and boron (loc. cit., table 1), the molar mass of silicon (table 2), concentrations of point defects in the lattice (table 3). Equally, the analysis took into consideration the $\ce{SiO2}$ layer naturally formed if the sample is exposed to air, as well as adsorbed water; for both, the upper limit of layer width as well as the mass are provided. As an example, the deposit of oxygen on the spheres was mapped by X-ray photon spectroscopy (XPS): 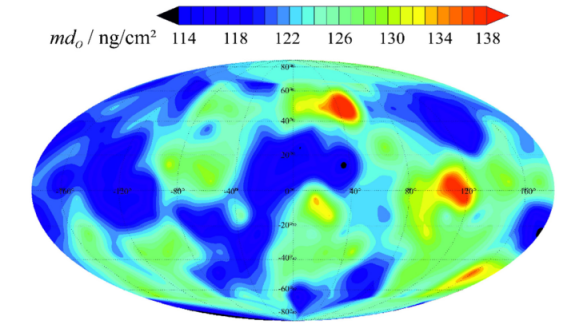 As for imperfections, this property equally was mapped:

With papers titled like The self-weight deformation of an x-ray interferometer the dedicated issue of Metrologia 48(2), April 2011 shed some light on monitoring the quality of the samples and the used tools for the analyses.

Additions: A video of channel veritassium is dedicated to the reference spheres, too. The section starting at 7:00 min focusses on carving and polishing them (8:11 min, at 8:19 min likely showing Leistner himself).

Starting from the ingot, a section is cut. A lathe is used to obtain a sphere already with an shape accuracy of $1\,\pu{mm}$. To smoothen the surface, these spheres are lapped with alumina particles in water with finer and finer grains; eventually (fine lapping) within a margin of $100\,\pu{nm}$. To polish the surface, collodial alumina and eventually titanium dioxide yielded a shape deviation of less than $50\,\pu{nm}$ and a surface roughness below $0.2\,\pu{nm}$. This publication explicitly refers to Leistner's work including publications authored by him (example, example) and then established protocols easing to manufacture such samples reliably.

PTB continues both further development of the interferometers (here) and the deployment of these spheres as substitute of the old standards (example). (As of writing, the mass standard's group seeks collaborators for Si spheres (reference, perma).) Comments by Maurice and GM suggest the advancement of mechanical engineering and this new definition of the kilogram might offer smaller mass references which do not need to be as large and heavy as $1\,\pu{kg}$.

First thing I think we have to differentiate between checking the roundness and the roughness (that in the article seems it is called smoothness) these two properties of the surface necessitate different tools. Regarding the roundness I doubt that the atomic feeling of Leistner can do much in fact if you look at this video it is clear that the roundness is measured with a CMM machine (even though in the publications is reported a special interferometer).

Regarding the roughness, indeed the human tactile sense has a great sensitivity to roughness in an article appeared in Nature the authors found that humans can distinguish patterns with a wavelength of 760 nm and amplitude of only 13 nm. But from the new scientist article it seems that “rough spots” in the sphere stick out no more than 0.3 nanometres so basically I don't think that his atomic touch, in the sense of measuring roughness, was enough for this task. Working in surface metrology I would guess that is not so easy to measure the roughness at a nanometric level in the whole sphere in a curved surface! So if we want to take "the atomic feeling" literally what we could suppose is that he used his tactile sense to guide the roughness sampling with more accurate instruments, for instance, some interferometric technique.

Why can't "automated machining" match the precision of (assuming the alternative) "machining by hand"?

In the polishing phase is not only a matter of precision but rather on adapting to the changes of surface. Expert polishers are incredibly well paid, they know how to modulate the polishing pattern and force to solve the specific problem of the surface (e.g. scratches valleys etc. etc.) nowadays automated polishing still can not adapt quickly to the chaotic behaviour of the surface.

I quote the article Towards an automated polishing system: capturing manual polishing operations:

Some automated solutions have already been proposed to assist or replace human operator. However, these solutions typically lack flexibility and dexterity that are provided by human operators. For example, some of the polishing skills that are particularly challenging to automate include rapid reasoning and decision making based on visual inspections, and fast adjustment of the polishing patterns, e.g. when a surface defect is identified

So I would rather think that with "atomic feeling" they are just referring to the impressive, not well-defined skills set that an expert polisher has matured in his career to reach "atomic" polishing results!

Looking at the answer of @Buttonwood it seems that the roundness error was +- 28 nm and the diameter around 10 cm that would be a signal with an amplitude of 56 nm and very long wavelength of around let's say 2 cm, that would fit into the range in the Nature article that I linked (even if so long wavelength would indeed necessitate another study...)so maybe somehow he was able to detect this imperfection on the roundness as well for guiding the polishing? In the meanwhile, at PTB it seems they found a way to replace the atomic feeling of Achim, as shown in this video.

Chemistry - Counting number of acidic-H in a molecule Chemistry - Why isn't the American nickel magnetic? Chemistry - Writing half equation confusion Chemistry - How can we define a non-spontaneous reaction? Chemistry - When I burn isopropyl alcohol (IPA), it burns orange. But when I burn ethyl alcohol, it burns totally blue. Why is this? Chemistry - Are there ionic solids that conduct electricity? Chemistry - Understanding the use of Le Chatelier's principle in the industrial production of ammonia Chemistry - Generating electron density from protein coordinate (PDB) Chemistry - How can you build a model of tetrahedral coordination from objects found at home? Chemistry - What is the hidden meaning of electrochemical stability window? Chemistry - What does HClO2 aqueous solution decompose to in an open environment? Chemistry - Computing the commutator of the Fock and density matrices in AO basis (Hartree-Fock theory)
Pandas how to find column contains a certain value Recommended way to install multiple Python versions on Ubuntu 20.04 Build super fast web scraper with Python x100 than BeautifulSoup How to convert a SQL query result to a Pandas DataFrame in Python How to write a Pandas DataFrame to a .csv file in Python