Apple - Can I watch 1080p torrents while downloading?

Previously I used BitThief. It is developed by a technology institute in Zurich. It didn’t have a polished GUI and took a little bit too much CPU while downloading.

There's new client I found thanks to @diimdeep. It is called qbittorrent and it is awesome. 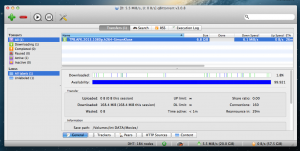 You can see that while downloading it downloads as a normal torrent client – the parts are downloaded randomly:

But there is an option: 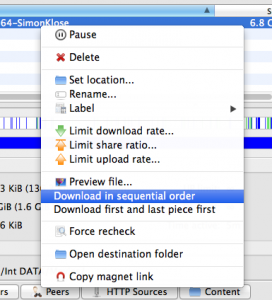 After that we can see that the rest of the file is being downloaded sequentially (blue – downloaded, green – requested):

How can we tell if the speed is good enough? By the estimated time of arrival (ETA):

If the movie is 1.5 hours and the ETA is 17 minutes, then the speed is sufficient.

I use MplayerX - a nice OSX gui. Download and associate movie files with mplayer (avi, mkg): 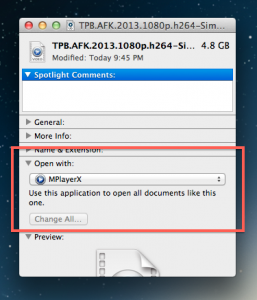 The final step is to to play the file after the downloading started: 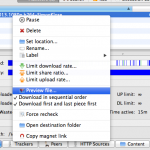 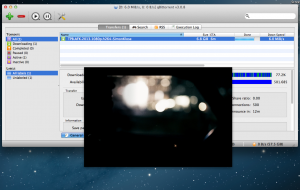 Yes. There are three requirements:

# 3 is trivial. Although you could cope with slower connection, if you download enough buffer for playback.

# 1 is somewhat trivial. VLC can start the playback of a file if the file's headers are downloaded (first pieces of the file). Seeking is a bit limited and I don't remember correctly if VLC stops when encountering a (too long) gaps in video. On Windows I've used GOM Player, which was more laid-back with missing frames.

# 2 is counter-intuitive. While many clients allow you to prioritise the files, prioritising pieces is less common. This is simply because torrents are designed to transfer big sets of data fast. A large reason why torrents are faster or more efficient than an ordered transfer of a file is due to the fact that torrents pick the easy fruits - whatever parts of the file are available from the least loaded / closest source are what get downloaded first. Statistically, you should expect to be missing key parts of the beginning of the video until the transfer is almost complete.

The speed is achieved by initially splitting the file(s) to pieces, sending the pieces to the clients in the network and then all the clients will share and merge the different pieces. The operation is best described with an animation found in BitTorrent's Wikipedia article.

Unfortunately I can't recommend any torrent clients that give you the option to prioritise the pieces—if there even are any—as I've never really had the need.

Also note that BitTorrent isn't exactly designed for playback while downloading (QED), but for just sharing data. You might get better luck with on–demand video rental services available in your area, which usually use software and protocols specifically designed for HD-playback over the net.

Sadly that leaves out lots of great indie content. Maybe the best way to deal with the issue is to gain patience or plan more ahead :-)

Apple - How to enable OS X screen sharing (VNC) through SSH? Apple - Does the MacBook Air draw power from the battery or wall socket when the battery is at 100% and plugged in? Apple - Excessive "Opening application for the first time" dialogs Apple - Is it possible to spell a word to Siri? Apple - Where will the incident with the sudo command be reported to? Apple - Sanding off a MacBook's sharp edges Apple - How can I list all user accounts in the terminal? Apple - How can I mount an ext4 file system on OS X? Apple - Is there an app that will let me edit track information (title/artist)? Apple - Cmd+Tab switches to the correct space, but doesn't bring app up to front Apple - "iTunes Sync: X items could not be synced. See iTunes for more information." Apple - Compass in maps and app always wrong
Pandas how to find column contains a certain value Recommended way to install multiple Python versions on Ubuntu 20.04 Build super fast web scraper with Python x100 than BeautifulSoup How to convert a SQL query result to a Pandas DataFrame in Python How to write a Pandas DataFrame to a .csv file in Python