Can ants walk on liquid mercury? 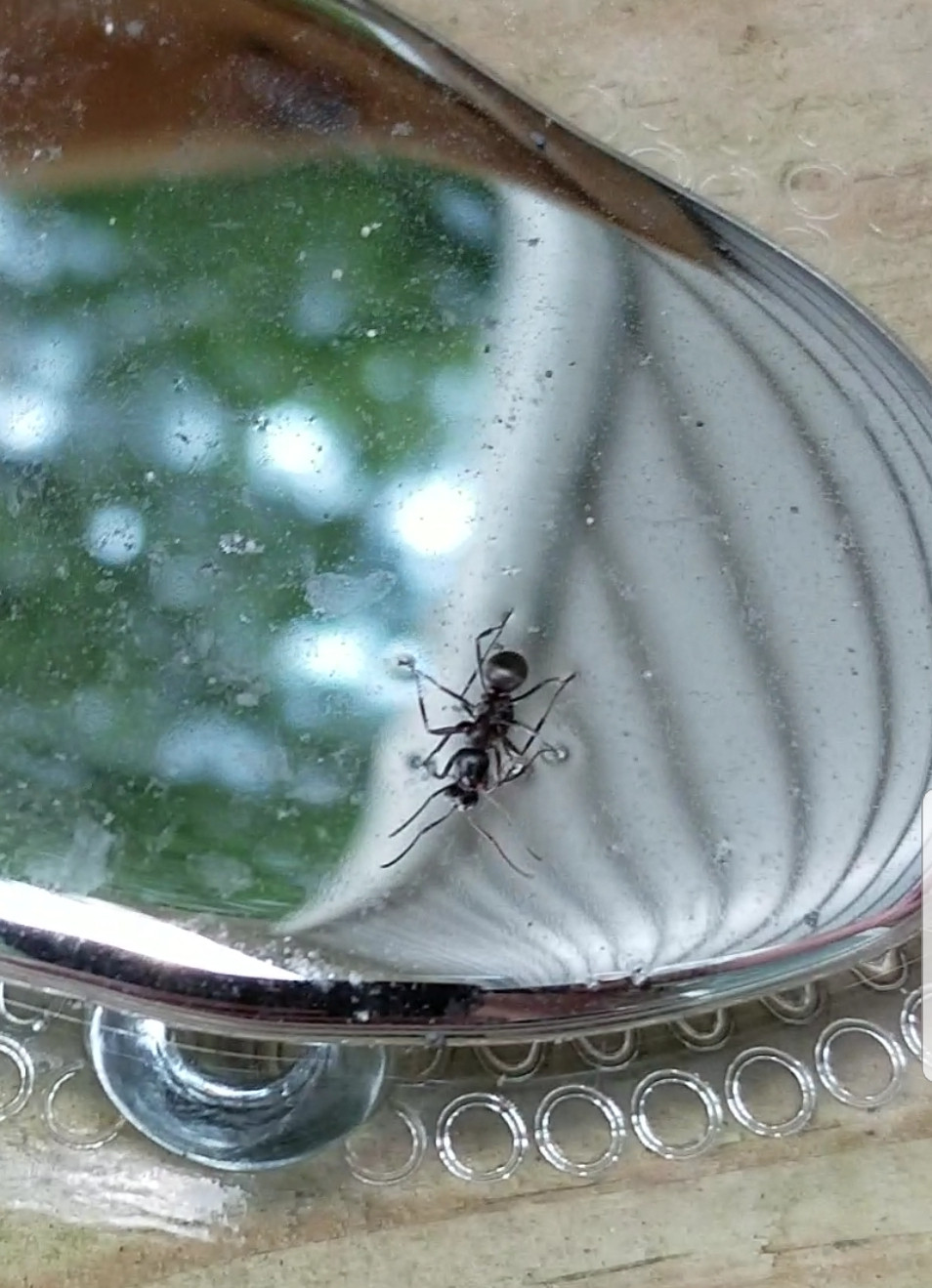 Needing any excuse to break away from the work I was doing, I immediately assumed the task of answering this question.

Yes, ants can walk on mercury with no trouble at all. I bet it was even kind of fun, but this little punk just split as soon as possible. I got a video, but had to settle for a screenshot for this post.

Whether or not a small animal/insect can walk on a liquid is determined much more by surface tension than by density. To see why this is consider a dense liquid without any surface tension. You would float in it very well, but if you tried to walk on it you would step right through the surface and fall over, sinking until you were sufficiently submerged to float (the amount of liquid displaced is equal to your body weight). Now imagine a very high surface tension liquid that is not very dense. You would be able to walk across it as long as you don't break the surface. The second you break the surface you would sink like a stone.

So now for the ant in mercury. The surface tension of mercury is much higher than that of water (~6x), so I think it's safe to say that an ant might succeed in walking across the mercury for a short while, as some insects of similar mass can walk along water. Though without some coating on the ants feet which repelled to mercury (like water-walking insects have for water), the ants feet would likely get covered in mercury and would start sticking the surface of the liquid.

If you'd like to learn a little more about mercury, the popular youtuber Cody'sLab has done several videos on it-

He successfully stands on a bucket of mercury in this one, although it looks like walking would be impossible.

He successfully drives an RC car on mercury in this one and concludes that one would be able to drive a full-sized car on a lake of mercury as well.

Based off the intuition of mercury's buoyancy apparent in these videos, I would expect that ants would be able to walk on mercury.

Weird Reflection Pattern in Reading Glasses Does an expanding event horizon "swallow" nearby objects? Are the creation and annihilation operators time-dependent? How far can a shout travel? When is the ergodic hypothesis reasonable? Do any of our satellites or space exploration craft need or use relativity for strictly navigational purposes? Definition of an operator in quantum mechanics One-loop Correction to Effective Action Does a massive spherical shell expand the time inside itself? Dam Son's problem: how long does it take to boil an ostrich egg? Neutrinos passing through black hole Why is there no magnetic field around a wire connected to electricity at home?
Pandas how to find column contains a certain value Recommended way to install multiple Python versions on Ubuntu 20.04 Build super fast web scraper with Python x100 than BeautifulSoup How to convert a SQL query result to a Pandas DataFrame in Python How to write a Pandas DataFrame to a .csv file in Python