Chemistry - Can a stoichiometric mixture of oxygen and methane exist as a liquid at standard pressure and some (low) temperature?

There's a NASA report that looks into this: "ON THE SOLUBILITIES AND RATES OF SOLUTION OF GASES IN LIQUID METHANE", Hibbard and Evans, 1968 and concludes that such mixtures are possible.

Figure 5(a) presents the curves for oxygen, argon, carbon monoxide, and nitrogen. Also shown are the two experimental values for nitrogen. Agreement is excellent at 99.83K and good at 110.9K. The curves for these gases show that solubility should decrease with increasing temperature and the nitrogen data confirm this. This figure shows the mole fraction solubility of oxygen to be 1.0 at 90K. This means that oxygen, which has a normal boiling temperature of 90.1K would continuously condense in, and be miscible in all proportions, with liquid methane at 90K. This is confirmed by reference 11 where, in a study of the solubility of methane in liquid oxygen, it was concluded that these formed a near-ideal solution at -297 F (90K)

(emphasis added) Reference 11 mentioned in there is "Hydrocarbon-Oxygen Systems Solubility", McKinley and Wang, 1960 (unfortunately paywalled) which also has interesting discussion of the stability (i.e. presence or absence of a tendency to explode) of various mixtures.

Figure 5 is reproduced below. Note how the solubility of oxygen rises rapidly as temperature drops. 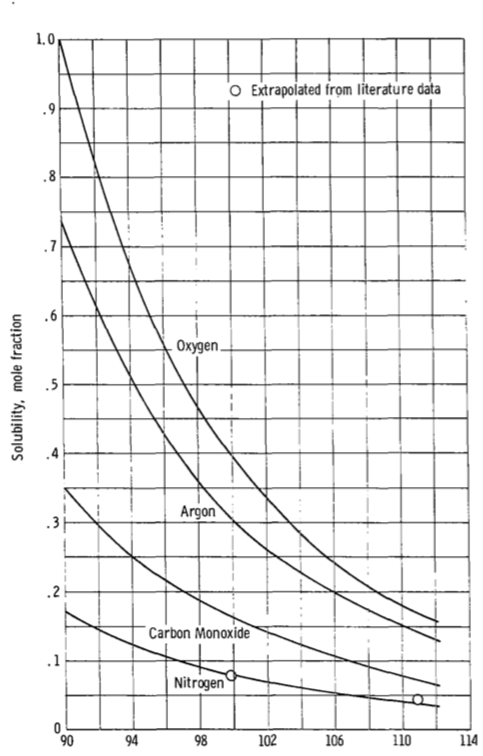 To add to the Bob's excellent answer (and expand a bit on my comment there), I've found two other potentially interesting papers to peruse.

The first is R.J. Hodges and R.J. Burch, Cryogenics 7 112-113 (1967), titled "The equilibrium distribution of methane between the liquid and vapour phases of oxygen". They note a "very high solubility of methane in liquid oxygen", with a equilibrium distribution coefficient at 93.15K (1.348 atm of O2) of 3.356 (so about 3x more methane in the liquid than in the gas phase). However, they kept the concentration of methane below the lower explosive limit so that it would not, well, explode.

Of perhaps more interest to the OP is R.L. Every and J.O. Thieme, Journal of Spacecraft and Rockets 2(5) 787-789 (1965) titled "Liquid oxygen and liquid methane mixtures as rocket monopropellants". In the introduction the authors note that previous work shows that the liquids are miscible in all proportions above 90K. Their tests show a specific impulse of almost 300 sec, and an exhaust velocity near 6000 fps.

In addition, since "shock sensitivities were reported" in the earlier work, they did some, well, vaguely disturbing experiments (hey, it was the 60's). "Tests were conducted to determine whether violent stirring or agitation, as found in an impeller-type pump, would detonate the mixture", although they didn't have any explosions there. They then went on to quantify the impact sensitivity, dropping a weight onto a stainless steel beaker of different mixtures from increasing heights until an explosion occurred. Impact sensitivities of 20-60 ft-lb were discovered. They also looked at adiabatic compression as a cause of explosion and found the liquid oxygen/methane mixtures were safer than some other things like nitromethane (which really isn't that comforting).

So, it would appear that the idea of using the liquid mixture as a monopropellant isn't totally off the wall, but please do it somewhere far from me...