Regarding your first question: In general it is necessary to follow this advice and simulate the first operand by {}, to allow TeX to distinguish between unary and binary operators. It is just that the align environment treats operators differently; \qquad does not simulate an operand. So if you don't know otherwise, I'd follow the advice.

The following document demonstrates the effect (or non-effect) of a pair of braces. 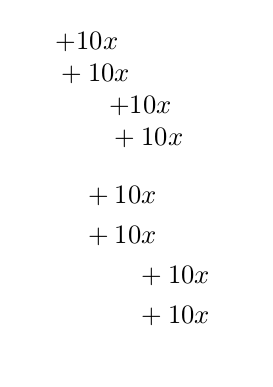 Your source is incorrect, but the additional {} doesn't hurt.

Each cell in an even-numbered cell begins with an implicit {}, which makes for an empty Ord atom.

The processing of math mode material is quite complex, but not really too complicated.

Each item can be a math atom or “other”; spacing commands are in the “other” category. Subscripts and superscripts are attached to the math atom they belong to, so they are not of a concern here. Math atoms can be of several types:

and some others that, however, are basically transformed into Ord; in order to keep it simple, I'll not analyze them.

The formula TeX finds when processing the & \qquad + 10x line is

The sequence of math atoms determines the spacings that are automatically added. If a Bin atom is preceded and followed by Ord atoms, TeX inserts around it a medium space, independently of “other items” in between; no space is inserted between Ord atoms. You find the complete list at https://tex.stackexchange.com/a/240579/4427

After automatically inserted spaces are dealt with, TeX builds a horizontal box with the items, this time keeping into account the “other items”, so you get

(the spaces above are just for separating items)

that would add spaces so to get

and the result would be the same, because an empty atom produces nothing (apart possibly from triggering an automatic insertion of spaces).

This has been the behavior of amsmath since its release, even when it was called amslatex, so 1992 or so.

The purpose of the implicity empty Ord atom is to get correct spacing in a typical align:

where B+C is not really typical, but is used by way of example. The sequence of atoms when processing the second cell in the first row would come from

and, since TeX inserts a thick space between either Ord-Rel or Rel-Ord, we get

This is to allow the result to be the same as if it had been A=B+C as far as automatically inserted spacing is concerned.

Actually, there is a place where to be careful: if a cell in an even-numbered column starts with an Op atom (such as \sum or \log), a thin space would be inserted, because TeX automatically adds it between Ord and Op.

Is there a difference between \qquad{} and \qquad {}? No. Spaces after a control word are ignored.

Accent in letters over a Letter my matrix doesnt fit the page aligning shapes in latex Defining a custom TikZ arrowtip (circle with plus) \cmidrule's trim option Why does CTAN now look like I'm on LSD? Latexmk script could not be found Seasonal Challenge (Contributions from TeXing Dead Welcome) Is there an equivalent to \uput in TikZ? Using DeclareUnicodeCharacter locally (in document, not preamble) making new symbol from two symbols Calculating the minimum of two distances with tikz
Pandas how to find column contains a certain value Recommended way to install multiple Python versions on Ubuntu 20.04 Build super fast web scraper with Python x100 than BeautifulSoup How to convert a SQL query result to a Pandas DataFrame in Python How to write a Pandas DataFrame to a .csv file in Python