Big discrepancy between theoretical and actual power through my pulse generator

So, after a week, I have at the last the answer of the enigma. I think the answer is interesting, in particular for the persons who intend to deal with avalanche breakdown.

The first thing I did, following the advice of Sunnyskyguy, was to scope the voltage at the terminals of R2, in order to check if the current measured by the analog Ammeter was wrong. Surprisingly enough, it can be deduced from the image below that the Ammeter was remarkably exact: the mean current is indeed about 0.6mA. Here is the image of the voltage at one terminal of R1 (between R1 and R2): 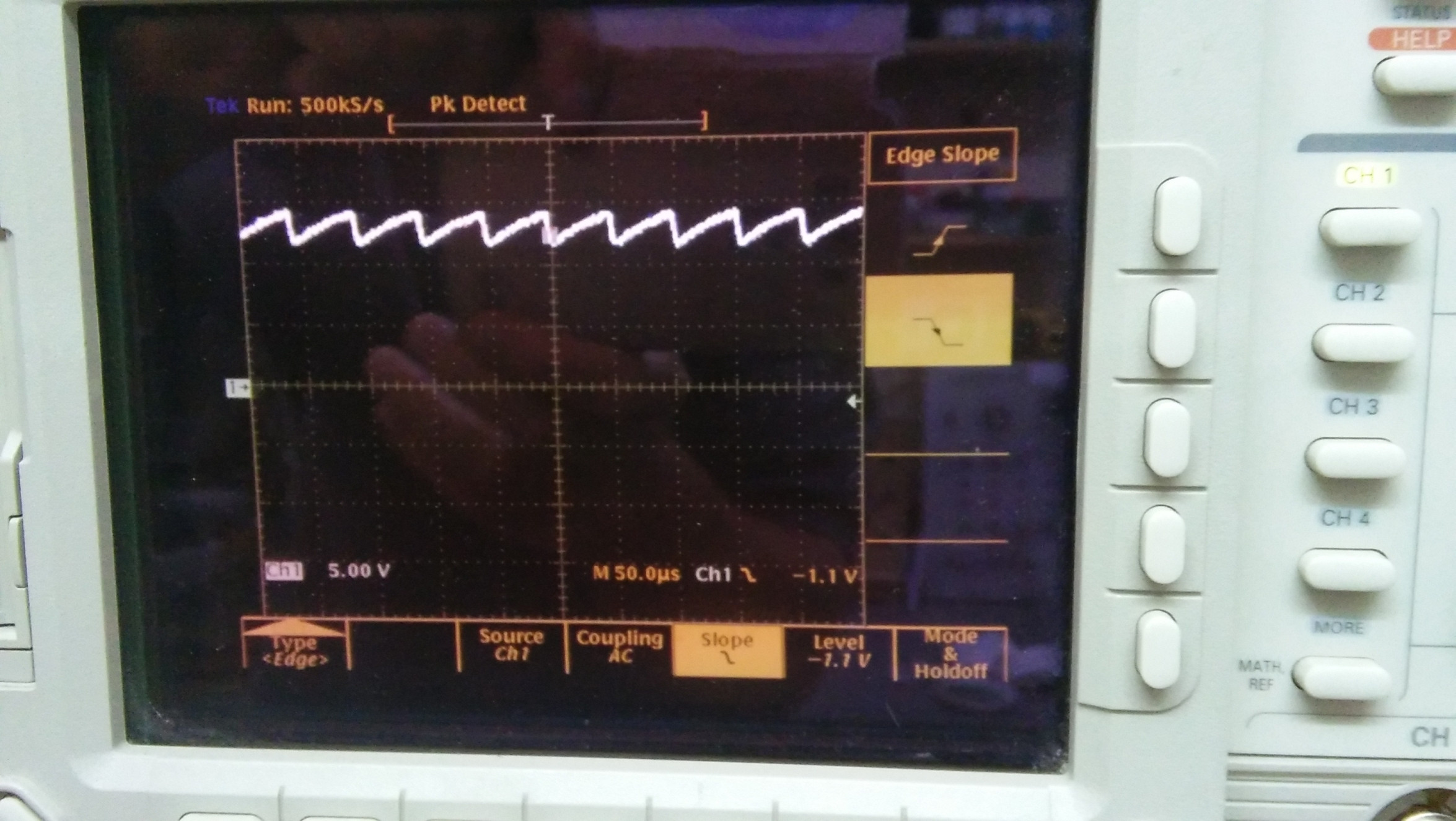 After being fixed about that, I noticed that there is a big problem: where is the charge flowing ? In 1s, we've just seen that a charge of 0.6 mC is flowing. But it is very easy to compute the charge flowing through the 50 ohm resistor of the attenuator in the image of the pulse (see the question): the pulse has a height of 57 V, and the shape of a right angle triangle of base 10 ns, so the charge brought by a single pulse is $${1\over 2}{57\over 50} \cdot 10 ns$$ and multiplying by the number of pulses in 1 second (25kHz), we find a charge of about 0.15 mC during 1 second. This is much less than the 0.6 mC flowing through the generator. So, where is most of the charge flowing ? there is only one other path the current can flow: THROUGH THE BASE RESISTOR R3.

To check that, I've built a quick and dirty test with a 2N3904 transistor, whose emitter is left open and the reverse current flowing from the collector to the base is measured with the Ammeter. In the first picture below, the base is connected to ground via a 10k resistor (as in the question), and in the second picture, the base is directly connected to the ground: 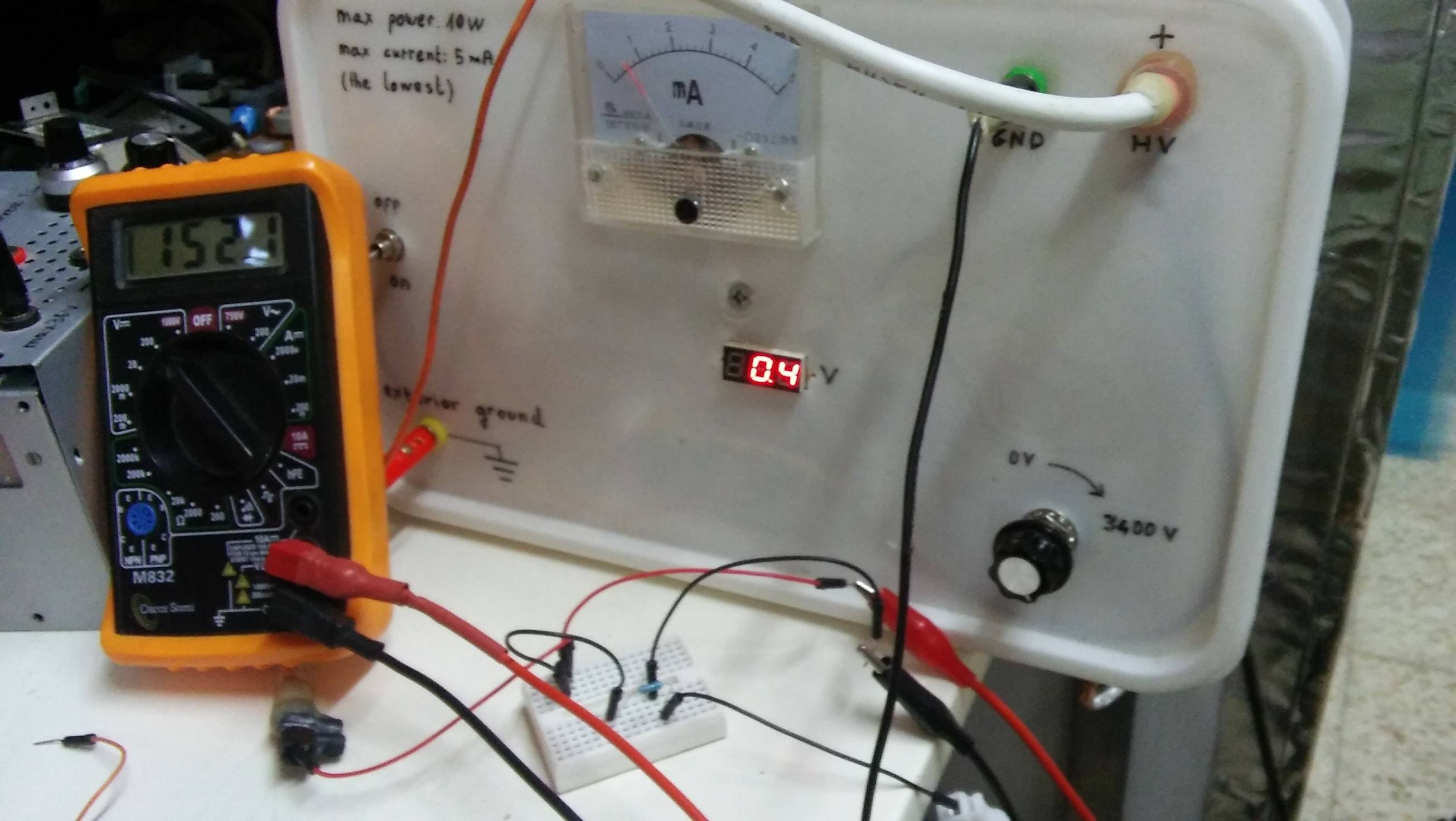 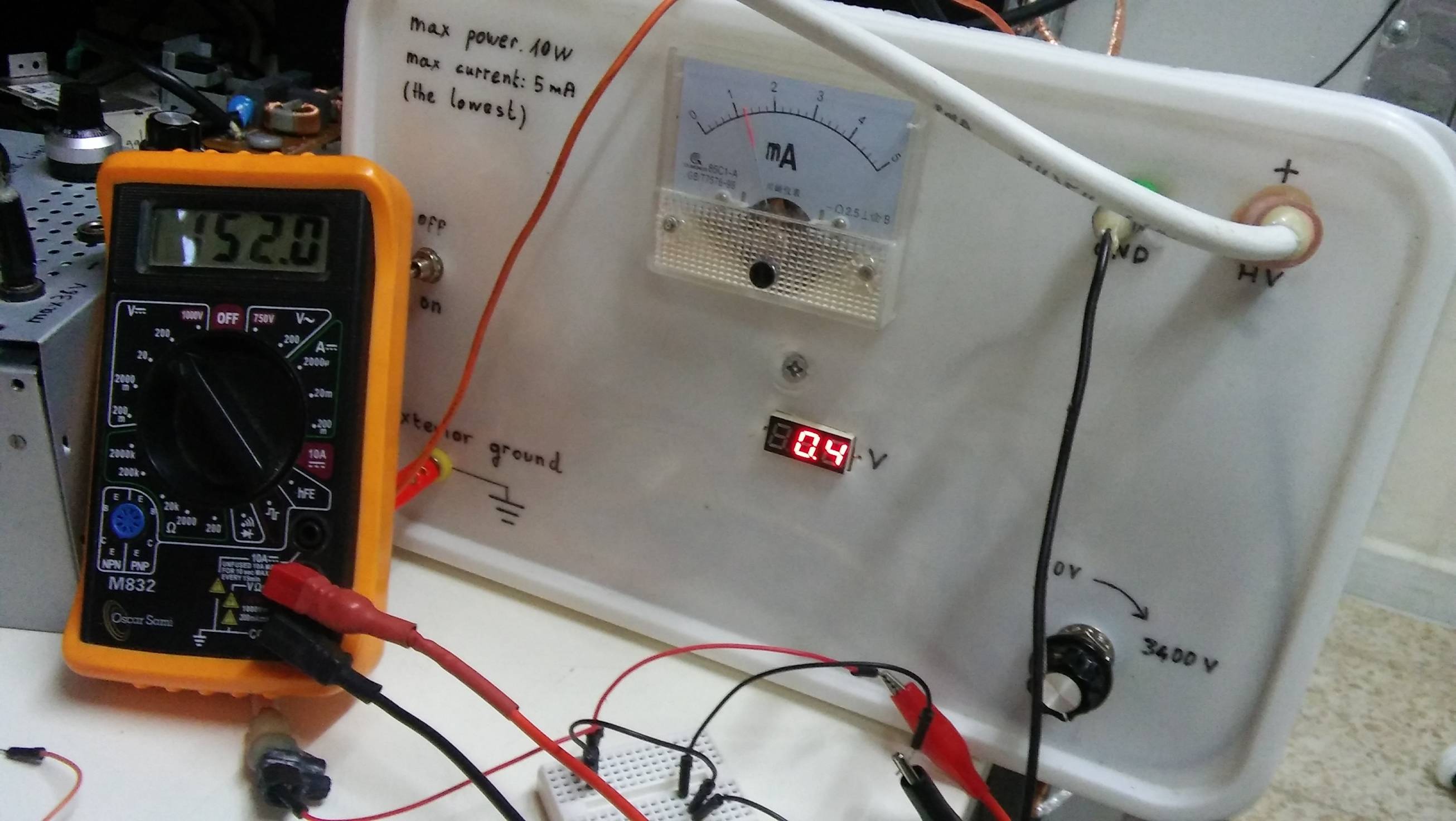 Notice that there is a current jump precisely at the avalanche voltage (150 V); before that, the collector-base is almost not conducting, and after this threshold, this junction becomes rapidly more and more conducting, and I even observed a negative resistance at some voltage. That means that after the avalanche breakdown voltage, the collector-base current is more and more controlled by the base resistor, until it reaches the limit of Ohm law: I = 160V / 10k = 16mA (that my generator is not able to feed).

To conclude this answer, it can be learnt from this question that the collector-base reverse current becomes very important after the avalanche breakdown threshold voltage, and should be considered very seriously regarding power dissipation and supply current.

You are measuring the discharged triangular output pulse shape with < 1ns rise time and ~ 10ns base pulse-width and expecting that all of the power dissipated in the 50 Ohm load resistor is 100% of the power supplied by the high voltage DC generator. Yet it is only 1/3 of the input power. {0.32=5.8mA/18mW}

So the question you ought to be asking yourself is, if my measurements are accurate, where did the other 2/3 of the power go?

Even if the transistor dissipated some energy in it's negative resistance and using a TO-92 , it has a thermal resistance difference from ambient to case of Tca=0.127 ['C/mW] {=Tja=Tjc ['C/W]}. So with only 12mW missing, you should not assume you can detect how much of that is dissipated easily with your finger!
- There I used the datasheet difference in thermal resistance between the Junction-Case and Ambient, to prove this.

So where did the energy go? 98% dumped in the charging resistors. !!!

hint: in R1 & R2 charging resistors and some in Q1's negative resistance

Mathematically modelling RC circuit with a linear input Unrecognized IC Package Style Why is the the permeability of a ferromagnetic material given as B/H not it's slope dB/dH? What does the output current rating from an H-Bridge's datasheet really mean? What does this circuit symbol mean? Polyfuse with Crowbar for Over Voltage Why not make one big CPU core? How can calculate the turn-off time of an LDO? Purpose of cylindrical attachments on Power Transmission towers Why is my power MOSFET heating up when on? Trying to get (more) accurate readings from thermistor (electronics, math, and code inside) How op-amp stabilizes?
Pandas how to find column contains a certain value Recommended way to install multiple Python versions on Ubuntu 20.04 Build super fast web scraper with Python x100 than BeautifulSoup How to convert a SQL query result to a Pandas DataFrame in Python How to write a Pandas DataFrame to a .csv file in Python