Please bear in mind that I am an experimentalist, therefore I treat theoretical ideas and models as dependent on experimental observations and not vice versa.

On the theoretical side these experimental observations are fitted beautifully by the Dirac equation if one considers the negative energy solutions to describe the antiparticles.

One thing we can be sure of is that measured antiparticles travel forward in time.

The popular theoretical interpretation of antiparticles being particles traveling backwards in time mainly comes from the Feynman diagrams. These are a brilliant mathematical tool for fitting and predicting measurements representing particle interactions as incoming lines and outgoing lines and in between lines representing virtual particles that carry the quantum numbers but are off mass shell.

Due to the CPT theorem, once a Feynman diagram is drawn, one can interpret the lines consistently according to CPT and will get the corresponding cross sections and probabilities for the change in the quantum numbers consistent with CPT (charge conjugation, parity and time reversal). Identifying a positron as a backwards-in-time electron is an elegant interpretation that in the Feynman diagrams exhibits the CPT symmetry they must obey.

What I am saying is, the statement "positrons are backward-going electrons" is a convenient and accurate mathematical representation for calculation purposes. "As if". There has not been any indication, not even a tiny one, that in nature (as we study it experimentally) anything goes backwards in time, as we define time in the laboratory.

I'm curious: how would you expect empirical data from a backwards-travelling positron to differ from what we actually see?

In this bubble chamber picture we see the opposite to annihilation, the creation by a photon of an e+ e- pair. (This is an enlarged detail from the bubble chamber photo in the archives. The original web page with the letterings has disappeared, as of july2017) 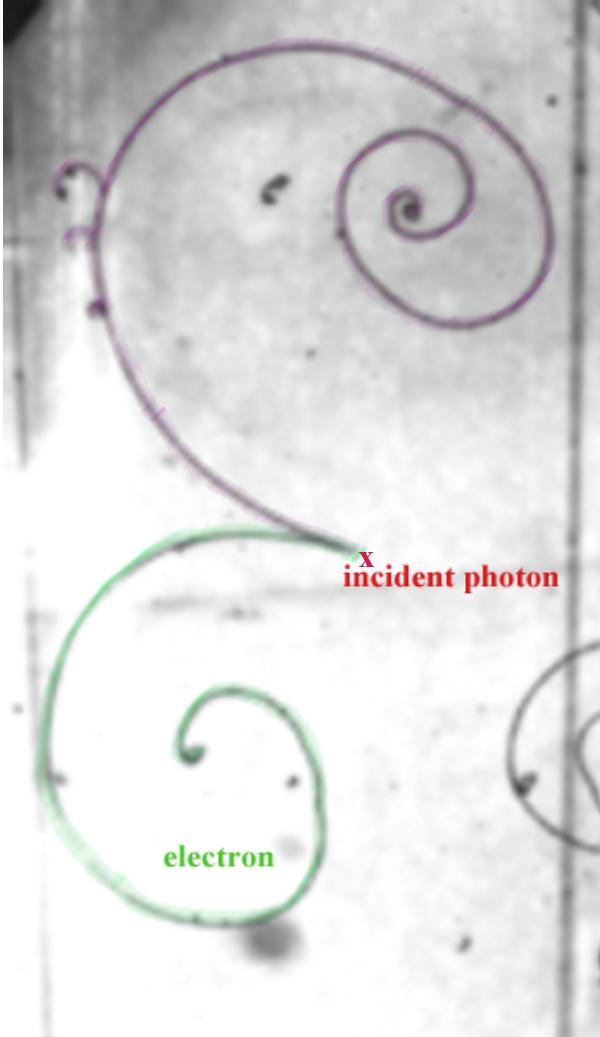 The magnetic field that makes them go into helices is perpendicular to the plane of the photo. We identify the electron by the sign of its curvature as it leaves the vertex. The positron is the one going up to the left corner. We know it is not an electron that started its life before the vertex formed because as an electron/positron moves through the liquid it loses energy and the loss defines the time direction of the path. So the particle has to start at the vertex and end at the upper left, so it has the opposite curvature to the electron and it is a positron.

A Feynman diagram looks like a scattering in real space, or a pair production, but one cannot project the intricacies of the mathematics it represents onto real space. It is only the calculations of cross sections and probabilities that can be compared with measurements.

Yes, antimatter particle can be treated as moving back in time in some sense.

But consider some points:

(1) If an abject is moving "back" in time, we, normal objects, will see it as moving forward in time. For example, if some person lives back in time, we will see him or her as living forward in time, but being first dead, then old, then adult, then child and finally born. I.e. we will see a person who has reverse order of life stages. Suppose the Earth is full of persons which live forward or backward. What we will decide? We will decide that there are two types of persons with reverse order of stages, nothing more.

(2) Particles have no life stages like persons. Both electron and positron do not change or evolve while "living". They are unchanged and have constant properties. Also, the process of "moving" (in space) does not have time direction.

Why does a helium filled balloon move forward in a car when the car is accelerating? Assuming that the Cosmological Principle is correct, does this imply that the universe possess an empirically privileged reference frame? What made Bohr quantise angular momentum and not some other quantity? Euclidean derivation of the black hole temperature; conical singularities Why is there no permittivity-type constant for gravitation? Why can we see the dust particles in a narrow beam of light (and not in an all lighted area)? Deriving Gauss-Bonnet Gravity (Or just higher order corrections) Motivation for tensor product in Physics Why does electromagnetic induction actually occur? What exactly is the 'lift' of a sailboat as explained by Bernoulli principle Can we infer the existence of periodic solutions to the three-body problem from numerical evidence? How do Zener diodes survive the breakdown during reverse bias?
Pandas how to find column contains a certain value Recommended way to install multiple Python versions on Ubuntu 20.04 Build super fast web scraper with Python x100 than BeautifulSoup How to convert a SQL query result to a Pandas DataFrame in Python How to write a Pandas DataFrame to a .csv file in Python