Ampere's Law: Any surface? But what about these? There must be some requirements right?

Ampere's law does work for those surfaces too. What you have forgotten about is (i) the non-zero conduction current in the plates for surface 1; (ii) the non-zero displacement current term over surface 2. Both of these terms contribute negatively to the RHS of Ampere's law and hence match the $r^2/R^2$ reduction factor in the derived B-field between the plates at a distance $r$ from the centre line.

Ampere's law is not that the closed line integral of the B-field equals the enclosed current; it is that it is equal to the sum of the enclosed current and the enclosed displacement current terms - that is the whole point of the capacitor example. i.e. $$\oint \vec{B}\cdot d\vec{l} = \mu_0 \left(I_c + I_d\right)\ .$$

Let's simplify surface 1 to be a cylinder extending from your loop of radius $r$ so that it ends outside the plates. (See below for a sketch). 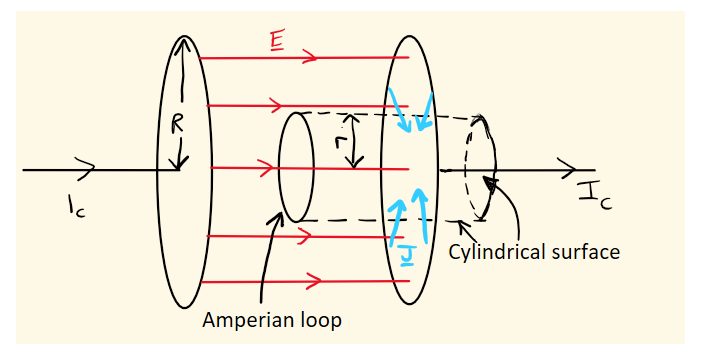 Well, what you cannot assume is that there is zero conduction current in the plates themselves. For example if the capacitor plates are circular with radius $R$ and your circular path is of radius $r$, then a fraction $(R^2 -r^2)/R^2$ of the charge on the plates lies outside the cylindrical surface I defined above. But if the charge on the plates is changing with time there must be a net current flowing from the outer part of the plates to the inner part and then into the wire (shown as a blue current density in the picture). This will be a negative term on the RHS of Ampere's law because it flows into the cylindrical surface, and will be of size $I(r^2 -R^2)/R^2$. The sum of the conduction current terms is therefore smaller and indeed will match the reduced B-field between the plates at radius $r$ compared with the field you would expect for a similar loop outside the plates.

For surface 2 the solution is different. The surface does not cut through the plates at all so there is no additional conduction current term. However here there is a negative displacement current contribution due to the integral of the rate of change of E-field over that part of surface 2 which is between the plates. It is a negative contribution because the E-field lines are going into surface 2 between the plates. Again, a careful calculation would show that this negative displacement current plus the conduction current that exits surface 2 outside the plates is exactly what is required to balance the smaller LHS of Ampere's law for the small loop of radius $r$ between the plates.

You have understood something very important. It seems like a paradox that we can use the surface through the capacitor through which no current passes. This is the crucial observation that lead to Maxwell to his equations. The point is that the validity of Ampere's law requires an extra term $$ {\bf J}\to {\bf J}+ \frac{\partial {\bf D}}{\partial t} $$ where $ {\partial {\bf D}}/{\partial t}$ is Maxwell's displacement current. Although there is no current ${\bf J}$ between the plates, there is a displacement current, and once you include that you get the same $\int {\bf H}\cdot d{\bf r}$ for every surface.

Without the displacement current there would be no electromagnetic waves. So Maxwell's (and now your) worry about this point is the birthplace of all radio technology.

This actually applies in any dimension, not just three. It goes like this.

Circulation is a kind of idea, that if you put two loops side by side, each carrying the same current, the current down the common edges cancel out, and the two polygons merge into one. Thus a figure can be built up, such that all of the polygons on the surface have currents that cancel out.

Each bit of surface, has an out-vector, which is proportional to the area. A vector normal. This vector, in a closed figure, is the 'gradient of density', or $\nabla D$. The interesting thing here is that for a closed surface, $dV = \vec r \cdot d\vec S$ , which is the usual way of measuring volume (ie sum over the volume).

Since this is a moment (that is, the sum of vector elements over coordinates), and volume does not have a residual moment, then $\sum d\vec S = 0$.

If we now divide the surface by a boundary, such as a loop, then there is a 'current' in the loop, and the two halves have an area-vector of $+A$ and $-A$, retaining the same value. We can then replace $+A$ by any other surface that is bounded by the loop, and expect that it has a definite volume, and thus has the same vector area.

It works in all dimensions. For example, given two points A and B, the vector sum of the perpendiculars to dS, segments of the line, must be constant (and equal to the length). In four dimensions, a polyhedron made of clockwise faces, points 'down', and when two clockwise faces are placed together, they cancel out.

General plane motion and freely floating rigid body What is the basic idea behind the renormalization group? Why this integral represents an area in the phase space? How does the center of mass move forward on a rocking chair? The definition of 1 kelvin Why don't opaque objects reflect light? Canonical isomorphisms vs Legendre transform Does the first postulate of special relativity imply constant speed of light? Feynman loop diagrams physical meaning How do non-linear equations lead to self-interaction? Would there be any gravity inside a hollow planet made of a spherical shell of basalt crust? What is the cause of electric force?
Pandas how to find column contains a certain value Recommended way to install multiple Python versions on Ubuntu 20.04 Build super fast web scraper with Python x100 than BeautifulSoup How to convert a SQL query result to a Pandas DataFrame in Python How to write a Pandas DataFrame to a .csv file in Python