Chemistry - Am I understanding buffering capacity against strong acid/base correctly?

Further to the answer by Poutnik the buffer capacity $\beta$ of a weak acid - conjugate base buffer is defined as the number of moles of strong acid or base $C_B$ needed to change the $p$H by $\pm1$ unit, where

This can be analysed to find its maximum, but can be simplified first by ignoring the first two terms, because $K_w$ is tiny as is $[H^+]$ compared to the last term close to $K_a$. Plotting this last term with $C_B=0.02$ produces the following curves 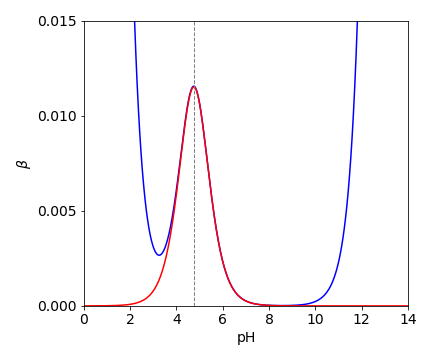 where the max buffering is seen to be very close to the $pK_A$. You can see that buffering will be ok only when the $p$H changes by $\approx \pm 1$ and when the $pK_A$ is in the range from about $pK_A $ from $\approx 4 \to 9$. The red curve is the last term in the equation, the blue curve the full equation.

To answer your first question the $p$H should be close to the $pK_A$ and as the total concentration of base ($C_B$) increases the maximum just increases but does not shift.

User porphyrin is correct that buffer capacity is defined as the number of moles of strong acid or strong base needed to change the pH of 1 liter of solution by ±1 unit.

However the problem also asks about only acid or only base being added. So:

The purpose of buffers is to keep $\mathrm{pH}$, with the differential buffering capacity $\frac { \mathrm{d[B]}}{ \mathrm{d(pH)}}$

If you are interested in the integral buffer capacity across $\mathrm{pH}$ range, than optimal is the buffer with the maximum capacity in the middle of the range. But the useful range for a single pair buffers is usually just about 2-2.5.

The rest of the answer depends on if more important is the initial $\mathrm{pH}$, the differential or integral capacity, or just the amount of strong acid/base needed for the solution to become strongly acidic/alkalic.

As for buffering against , we would want our  to be as high as possible, right?

Is this generalization correct: if my buffer $\mathrm{pH} <<< \mathrm{p}K_\mathrm{a}$, then does that mean it is optimal against strong bases (and vice versa)?

It would not be a buffer, but just a weak acid. If $\mathrm{pH}$ is high enough, it would have higher neutralization capacity than a strong acid, as higher molar concentration is needed for given $\mathrm{pH}$. But its initial buffer capacity would be very low.

Chemistry - Are there other carbon free gasses that can be used for energy transport, apart from hydrogen? Chemistry - Do isotopic groups cause optical activity? Chemistry - Why isn't ΔH = TΔS in ΔG = ΔH - TΔS? Chemistry - Where do the percents in empirical formula questions come from? Chemistry - What is the difference between quantities reported as optical rotation and circular birefringence? Chemistry - Kinetic Energy Evaluation Integral Evaluation Program Ostlund Chemistry - What does it mean to 'fuse' ores and why do we use alkali metals in the process? Chemistry - How does the rate constant change with the change of the temperature? Chemistry - Why does N(OH)3 not exist? Chemistry - General justification for steady state approximation Chemistry - Water becomes cold on mixing energy drink Chemistry - Importance of zinc blende and wurzite crystal structures for semiconductors?
Pandas how to find column contains a certain value Recommended way to install multiple Python versions on Ubuntu 20.04 Build super fast web scraper with Python x100 than BeautifulSoup How to convert a SQL query result to a Pandas DataFrame in Python How to write a Pandas DataFrame to a .csv file in Python