Chemistry - A glass of water with ice-cubes in it. Where's the water the coldest; at the top or bottom?

As the ice melts, it cools the water around it.

Technically, the ice cube melts because the water cools down. This may sound ridiculous at first, but you must consider the fact that the ice melts because it has drawn "heat" (energy) from its surroundings. The "surroundings" being the air and water that surround it (but the water's more important since it's a better conductor of thermal energy).

Given that cold water is denser than hot water, I would presume that the cold water would sink to the bottom...but it would warm as it sinks, reducing the density. 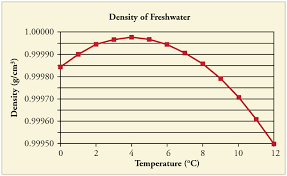 Meanwhile, the ice is still melting and giving off its cold to the surrounding water.

Ice isn't giving off its "cold", rather, it takes in the water's "heat" (thermal energy).

Back to your question.

As Max mentions in his answer, you have done a particularly good job of indicating what physical parameters we're dealing with; the really important ones being the temperature of ice, temperature of water (at the time you put the ice in) and the quantity of ice used (at least with respect to the water).

But assuming you're drinking water (originally at room temperature) out of a 250 ml styrofoam or plastic cup, and you used two (normal-sized) ice cubes and that you began drinking the water a minute after you plonk in the ice cubes, the water should be colder at the top than at the bottom.

Consider minute, imaginary layers/regions/packets of water in the cup (thinking about this in terms of water "packets" rather than water molecules is easier to comprehend). Also, think of the cup as having three (crudely demarcated) regions: Top, middle, and bottom.

Now, as those packets of ice sink, they gain more thermal energy from the packets of water they come in contact with on their way down. This, coupled with the viscous effects of water results in the mild "warming up" of the sinking packets.

Now since they warm up a bit, they tend to rise back up. Back at the top, they're get cooled and sink again. This process repeats for as long as the ice remains in the water.

So even if the ice cubes aren't actually touching your lips, you'll find sipping the water at the top to be colder than sucking out water from the bottom through a straw.

The convection to produce uniformity depends on a number of nebulous factors:

The gist is this. Lakes don't freeze solid in the winter. Without stirring, the lake water forms layers that mix very, very slowly. So the frozen ice floats on top of the lake.

So without stirring, the water at the lip is likely to be colder than the liquid at the bottom of the glass.

EDIT - This is an experiment that you can easily do at home. Fill a large clear glass (a real glass glass...) about 2/3 full with tap water and add food coloring with stirring to make the liquid fairly dark. Then add enough ice to fill the glass without stirring. Let the glass sit on a solid counter until the ice melts. (Nice experiment to run overnight....) Because the water has layered, the layer of water on top will be noticeable lighter in color than the layer on the bottom.

Heat flows by radiation, conduction and convection. First, I have to quibble over the term "ice water". Ice water may or may not contain ice. What it clearly implies is that the water is at 0°C. Consider a system where there is minimal air flow (hence minimal air-water conduction). Consider a system where the water (here water = liquid water) is at 0°. Ice is typically created at between -15°F and +25°F, depending on the freezer. It is in all cases, below 0°C (obviously). Now what happens in an ideal case when I put a "tiny bit" of ice into water at 0°C? Yup, the water all freezes. Now of course because the real world is not continuous, this won't really happen and it is possible to construct a system in which water and ice are at equilibrium at 0°C - but it is definitely not "easy". I mention the above to show you that you've failed to adequately specify your system. The masses and temperatures of the water and the ice matter. As does the temperature of the air, the temperature of the container, and the temperature of the bench/table. With a sufficiently insulating container, you still have to worry about the mass flow (currents) you've given to the water by pouring it. (These currents may take hours and possibly days to completely dissapate - even under near isothermal conditions!) And of course the shape of the pieces of ice matters. Consider a (perfectly insulating) capillary tube and a shallow tray with the same total volume capacity. The mass-flow and the thermal flow will be much different. Hydrodynamic calculations can be (and almost always are) enormously difficult. The water can't be any colder than 0° (ignoring supercooling). That clearly must occur in contact with the ice. But consider a cylindrical cup 10 cm in diameter (i.d.) Do you think that the answer would be different if I placed a 1 cm3 ice cube in 1 L of water in that cup OR if I placed a 1 cm thick disk with an diameter (o.d.) of 9.9cm into the cup? Yeah, under-specified system, big time. Another obvious missing piece is what you mean by temperature. Not in the sense that it's not a well defined (macroscopic!) property, but in the sense that you are (probably) thinking of the average temperature over some volume. As I said, the coldest water will be found "in contact" with the ice, but this doesn't mean the entire surface will be on average colder than the bottom 0.1 cm in the cup since it obviously depends on things you've not specified. Imagine as a final "monkey wrench" in the attempt to answer this, that the cup contains an insert and that metallic insert has been cooled to -200°C. You pour the 0°C water in, along with some unspecified amount of ice and you get some freezing of the water on the entire inside surface of the cup. Now even if we include this ice when we specify the volume and temperature of the ice, do you really think this ice would have the same effect as floating cubes? Or consider a ring of ice instead of a disk, and what about the surface roughness of the cups lining?

When the temperature goes down the kinetic energy decreases, the volume is decrease and then density goes up. Therefore solid is sink and liquid is on top.

It is related to the water but only up to the 4 °C. When there is water 10 °C, the temperature of the water goes down to 9 °C, the 9 °C water will go down because of the more density.

Chemistry - Why is it wrong to use the concept of hybridization for transition metal complexes? Chemistry - Easiest way (software) to visualize charge density from an .xyz file with point-charges? Chemistry - Why does whipped cream use nitrous oxide instead of nitrogen gas? Chemistry - Restricted open-shell versus unrestricted methods for open shell systems Chemistry - How to compute 2-electron integral for Hartree-Fock code? Chemistry - Column order, signs of MO coefficients, and density matrix construction in Hartree-Fock Chemistry - Where to buy/How to build a Devanathan-Stachurski cell? Chemistry - Why would a solution of FeCl2 appear brown/yellow sort of like FeCl3? Chemistry - Spiralling of electrons into the nucleus Chemistry - Why does chocolate melt so easily? Chemistry - What is produced when citric acid (powder form) is burned, is it safe? Chemistry - Conversion of Hessian from internal coordinates to cartesian coordinates
Pandas how to find column contains a certain value Recommended way to install multiple Python versions on Ubuntu 20.04 Build super fast web scraper with Python x100 than BeautifulSoup How to convert a SQL query result to a Pandas DataFrame in Python How to write a Pandas DataFrame to a .csv file in Python